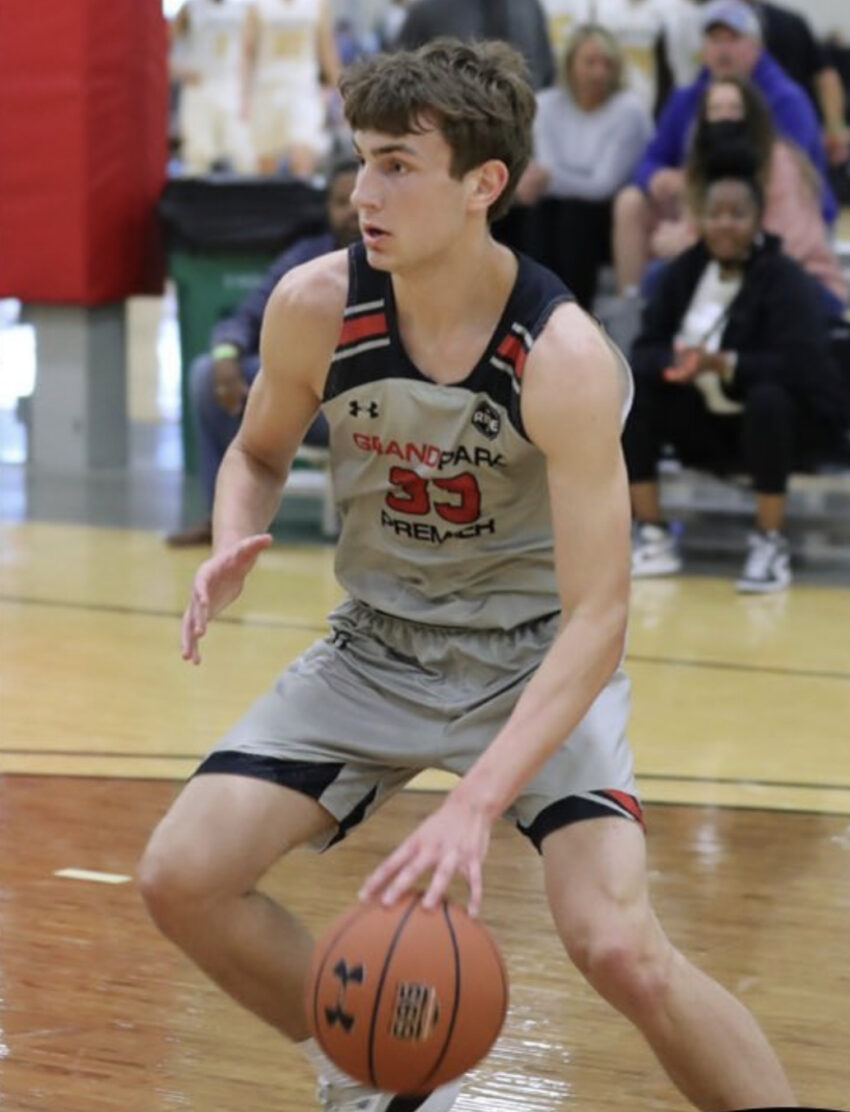 A lot of talent around the circuit and Anthony Forrester gives you a look into some of the top performers for May 11th.

1) Joey Hart(6’5”) Shooting Guard, Class of 2023 Linton-Stockton (IN), Grand Park Premier: Joey Hart has been a consistent offensive weapon for his team. The 6’5” shooting guard ability to knock down the 3 at a high clip opens up the offense. Joey is a scorer that can get a bucket in many different ways. Joey is leading the UAA in scoring with 22.6 points so far.

2) Chris Johnson (6’5”) Point Guard, Class of 2023 Bend Elkins (TX), JL3 Elite: Chris Johnson is an elite scorer and he is making his case to be one of the best in his class. Chris can get downhill and finish through contact. Chris makes the game easier for his teammates with his playmaking ability. While still being able to get to his spot and score at a high level.

3) Ashton Kendall(5’11”) Guard, Class of 2024, McDonogh (MD) Team Beyon Basketball: Ashton Kendall can fill up the score board and at an efficient clip. Just recently Ashton put up 26 points and 6 rebounds while shooting 4-6 from three. Ashton is a high level guard with endless potential. Through three games over the weekend Ashton is averaging 18 points and 5 assist. Ashton is a player that has a good IQ and sees the game in a different light.

4) Adam Njie (6’3”) Point Guard, Class of 2024, Hillcrest Prep(AZ), Riverside Hawks: Adam is a point guard that possess so many skills to be great. The class of 2024 guard averaged 22 points per game playing 16U. He has recently moved up and his offensive game has not seen that much of a dip. Adam is a tough guard to stop when he is driving downhill.

5) Darren Harris (6’5”) Guard, Class of 2024, Paul VI Catholic (VA) ,Team Takeover: Darren Harris shoots the 3 at a very high clip. This past weekend Darren put up 6 3’s in one game. The class of 2024 guard is proving to be one of the best shooting guards with his ability to get to his shot in mutiple of ways from pull ups to screens. Darren is becoming fearless when attacking in the paint he is looking to catch a body.

6) Tyler Boston (5’10”) Guard, Class of 2024, Bullis (MD),Team Thrill: Tyler is such a benefit on the court for his teammates in a way he creates for others. Tyler has the ability to split defenses and cause converge breakdowns. Which is key for his amazing playmaking. Tyler gets in the paint so easy and its hard for defenders because he can score from all three levels. Tyler has a nice handle and controls the pace even when pressure is applied. Tyler is a good defender which helps since he is 5’10”.

7) Kwame Evans(6’9”) Forward, Class of 2023 Montverde Academy (FL), Team Durant: Kwame Evans is a very good prospect with his frame at 6’9”. Kwame length allows him to make an impact on the defensive end. Kwame offensive game from the post in is really good as he finds more spots on the floor as that part of his game develops. Kwame has been a leader for Team Durant.

8) Patrick McDonough (5’10”) Guard, Class of 2025, Georgetown Prep (MD), District Basketball Club: Patrick is a guard that plays with amazing pace. His ability to playmake and find the open teammate makes the game easier for everyone. Patrick has shown flashes of being able to score in bunches. In a recent victory over Team Takeover Patrick hit 6 3 pointers.

9) Zion Stanford (6’5”) Forward, Class of 2023 West Catholic Prep Boys (PA), K-Low Elite: Zion is a efficient scorer in the paint. The 6’5” forward has a strong frame that allows him to play through contact and finish at the rim. Zion offensive game allows him to be a threat everytime he touches it becasue he can score from mid range and 3 as well which makes him a tough cover.

10) Xzayvier Brown (6’2”) Point Guard, Class of 2023, Roman Catholic (PA), K-Low Elite: Xzayvier is a true floor general and leads his team in that manner. He has the ability to playmake like no other. While picking his spots and being an offensive option. Xzayvier is a strong guard that takes care of the basketball.

11) Elmarko Jackson (6’3”) Point Guard, Class of 2023, Academy of the New Church(PA), We R1: Elmarko is a point guard that can score through contact. Which make sense because Elmarko is aggressive on defense and isnt afraid to get physical. Elmarko is a playmaker that make the game so easy. Elmarko isnt just good making shots on the move but he can also create for himself. Elmarko is the real deal and is jaw dropping when it comes to his finishing.

13) Daquan Davis (6’1”) Guard, Class of 2024, St. Frances Academy (MD), TTO: Daquan is a feisty guard that sits on defense while alwasy making it an effort to get after the opponent. Daquan is a pure shooter no other way to put it. Daquan can catch and shoot, off the dribble, and shot creation which makes him a tough cover for any defender.

14) Ugonna Kingsley Onyenso (7’0”) Center, Class of 2023, Putnam Science Academy (CT), New York Jayhawks: Ugonna is a center that is full of potential. Ugonna is a 7’0” center that changes shots with his shot blocking ability. He has shown signs of developing a touch around the basket. Ugonna has been impressive with his post game and finishing at the rim with authority.

15) Donavan Freeman (6’8”) Forward, Class of 2024, St. Johns (DC), Team Takeover: Donavan is a menace on the glass and gets boards while battling downlow. Donavan gives effort on every possession. Donavan is getting smarter when finishing at the rim and finding ways to be creative. Donavan has been making big plays on the court and it has help the team in so many ways.

16) Jadyn Harris(6’6”) Forward, Class of 2024, Bishop O’Connell (VA), Team Thrill: Jadyn is a explosive player in transition. Jadyn knows how to pick his spots from the midrange. Jadyn has a triple threat with skill, size, and power which helps him on the court in so many ways. Jadyn is aggresive at the rim weather its put backs or just finishing at the rim.

17) Seck Zongo (6’6”) Forward, Class of 2023, Whitehall (OH) Team Diffrrnt: Seck is a solid forward that is going to bring effort everytime he steps on the court. Seck is a key piece for Team Diffrrnt. Seck ability to play on both ends is huge.

18) Luke Bamgboye (6’10”) Center, Class of 2024, Our Lady Of Mount Carmel(MD), Team Thrill: Luke has a nice frame at 6’10” that is still in the process of filling out. Luke has good/quick feet which is impressive at his size. Luke does a great job of running his lane and making an impact in transition.

19) Anthony Nimani (6’3”) Guard, Class of 2023, Platt HS (CT), WeR1: Anthony Nimani is an aggressive guard that is determined when on the court. Anthony ability to get to the rim with authority is impressive at his size. Anthony is a good defender and likes to challenge shots and attempts at the rim.

20) Deshawn Harris-Smith (6’4”) Guard, Class of 2023, Paul VI Catholic(VA), Team Takeover: Deshawn is a combo guard that has been a guard that has been making winning plays as of late. In a close game against Riverside Hawks Club he hit a game winning jumper to end the game. Deshawn is showing flashes of being a clutch floor general and his skills are looking to translate at the next level.

21) Jeff Exinor (6’4”) Guard, Class of 2025, McDonogh(MD), Team Thrill: Jeff is an explosive guard that gets up in traffic and on the break. Jeff is a guard with good size in his class and is still developing. Jeff has the abilitiy to be special.

22) Thomas Haugh (6’10”) Forward, Class of 2023, Perkiomen School (PA), WeR1: Thomas is alert on the defensive end and uses his length to his advantage. At Thomas size he has solid handles that allow him to make plays in transition. Thomas has great footwork which allows him to finish so well around the rim.

23) Shawn Reckley (6’3”) Guard, Hackensack (NJ), Riverside Hawks: Shawn is a scorer and can get a bucket when his team needs one. Shawn is so versatile at the guard position which makes him a nightmare for opposing teams. Shawn has proven to be a solid guard with plenty of room for improvement.

24) Derek Dixon (6’4”) Guard, Class of 2025, Gonzaga College High School (DC), Team Durant: Derek shoots the ball very well and can shoot from all over the court. Derek ability todo that makes him a threat and opens the game up so much. Derek size allows him to switch ball screens and be versatile on that side of the ball.

25) Jamie Kaiser Jr. (6’6”) Shooting Guard, Class of 2023 Bishop Ireton(VA), NewWorld Basketball: Jamie Kaiser Jr. the 6’6” shooting guard has been proving he is a knockdown shooter. The energy Jamie brings to the court makes an impact on his team especially on the defensive end as he sits on defense and makes it tough every possession.