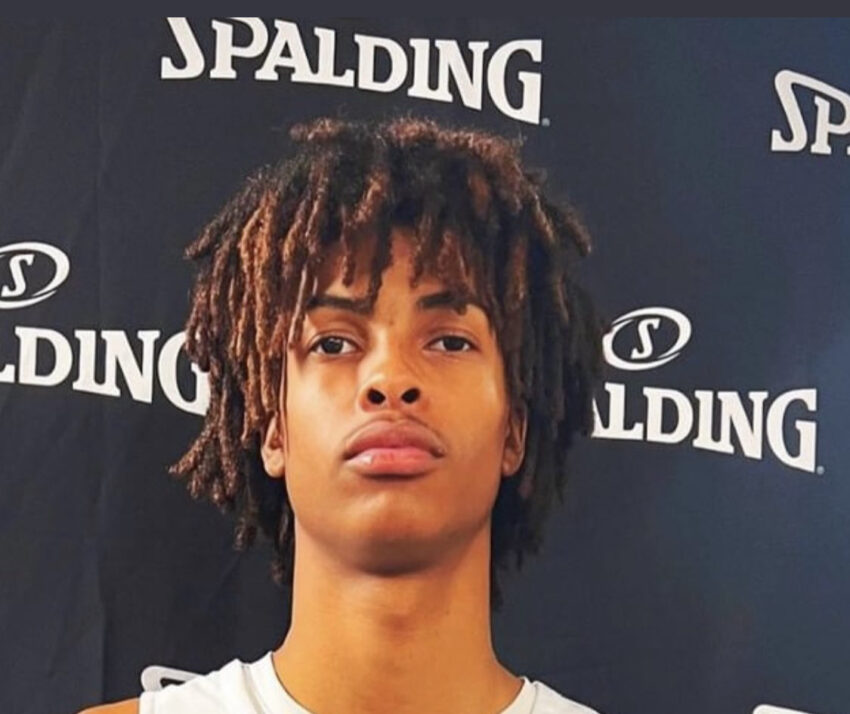 Here is our spring edition list of the Top 25 Recruiting Prospects from The Hoop Post for the Class of 2024.

1) Nassir Cunningham (6’7”, 175) Forward, Gill St. Bernard’s School, NJ – Overtime Elite: Nassir is a unique prospect who leaves his mark on the game everytime he steps on the court. Nassir length and athleticism mixed together on the court makes him a unicorn. He can score at the rim with ease and has a very good offensive game.

2) Ian Jackson (6’5”, 180) Forward, Cardinal Hayes High School, NY: Ian impacts the game on both sides of the basketball with his energy that compliments his overall game. His athletic ability allows him to be dominant in transition which opens other areas of his game which makes him a tough cover. Ian can score the basketball off the dribble as well as catch and shoot which makes him such a threat on the floor.

3) Isaiah Elohim (6’4”, 185) Forward, Sierra Canyon High School, CA: Isaiah Elohim is not a freak athlete but has good size, bounce, and all the physical tools. Isaiah is able to bully his way into the lane against competition. Isaiah is a strong, compact and aggressive shooting guard. Isaiah rises up smoothly for his jumper and has a great touch and an overall great feel for scoring the ball.

4) Tre Johnson (6’4”, 180) Guard, Lake Highland High School, TX: Tre is a very good jumpshooter of the catch or utilizing the rhythm dribble and he loves the mid range game. Tre is a long and lean perimeter prospect who shows a sweet stroke. Tre is trememdously skilled and has a good feel for the game.

5) Trentyn Flowers (6’6”, 175) Forward, Sierra Canyon High School, CA: Trentyn Flowers has the size, length and vast skill set to legitimately fit in anywhere on the court. Trentyn an elite athlete, a feisty rebounder on both ends, guards multiple positions and plays with an unrelenting motor. Trentyn is like a swiss army knife. Trentyn can knock down shots from the perimeter as well as taking guys down to the post.

6) Bryson Tucker (6’5”, 180) Forward, Mount St. Joseph High, MD: Bryson Tucker has a mature body and game, a smooth shooting stroke, and is as fundamentally sound as they come. Nothing in Bryson game seems to ever be rushed, he plays at his own pace. Bryson can make shots with a confident pull-up. He has great size to go with a natural basketball IQ.

7) Derik Queen (6’8”, 230) Forward, Montverde Academy, FL: Derik Queen is a highly skilled point forward who is gifted with elite versatility that allows him to impact the game from virtually every spot within the offense. Notable passer with good court vision and ability to read defenses. Derik is effective when posting on the block or away from the basket.

8) Jayden Williams (6’8”, 205) Center Brookwood High School, GA: Jayden Williams is a beast on the defensive end. Jayden is an elite shot blocker and a anchor on defense. With Jayden lenth and athleticism makes him a tough matchup for opposing teams.

9) Liam McNeeley (6’6”, 190) Forward, John Paul II High School, TX: Liam McNeeley is an extreme talent with a high IQ who is only starting to tap into his upside. Liam has the handle and feel to initiate an offense through pressure and with his textbook shooting stroke, he has the capability to be a knockdown three-point shooter at a high level.

11) Jarin Stevenson (6’9”, 215) Center, Northwood High School, NC: Jarin Stevenson is skilled and can take over games. Jarin brings a lot of energy to his team. Jarin get buckets and rebounds for his team.

12) Airius Bailey (6’7”, 210) Forward, McEachern High School, GA: Airius can rebound, score, and looks for opportunities to help his team win. Airius is a menace around the rim when it comes to rebounds and blocking shots. Airius Bailey is a lengthy and explosive forward.

13) Elliot Cadeau (6’0”, 175) Guard, Bergen Catholic High, NJ: Elliott Cadeau is a confident jump shooter with deep range off the bounce and the catch. The speed is what jumps off the page immediately with Elliot Cadeau. Elliott has good floor vision and a crafty handle to get his spots on the floor.

14) Johnuel Fland (6’2”, 175) Guard, Archbishop Stepinac High School, NY: Johnuel Fland is a super shifty two-way point guard with an eye to be a playmaker and efficient three-level scoring ability, making him a devastating defensive assignment for the opposition.

16) R.J. Jones (6’7”, 205) Forward, The Rock School, FL: R.J. Jones can play multiple positions for his team. R.J. is a really great shooter, and can do a lot of post-work. R.J. is really good in transition, getting his teammates open, and making plays for others.

17) Paul Mcneil (6’5”, 180) Guard, Richmond Senior High School, NC: Paul Mcneil is a threat from all areas of the floor thanks to his smooth jump shot and solid basketball frame. Paul’s work ethic is unreal and he’s a special talent. Paul has good shooting ability for his size, his handling of the ball is good, his upbeat motor and his efficiency on both ends of the floor.

18) Jahki Howard (6’6”, 175) Forward, Donda Academy, CA: Jahki Howard has already shown flashes of brilliance with a smooth combination of flash and efficiency, a knack for creating space off the dribble and power to finish at the rim. Howard plays hards in spurts and is productive on both ends when doing so. Jahki is very long, athletic, and disruptive on the defensive end.

19) John Bol (7’0”, 210) Center, Christian Brothers College, MO: John Bol plays with tremendous energy getting up and down the floor as well to battling on the defensive end. John is a mobile big man with good agility moving very well for his size. Offensively, John has a good ability to finish everything around the basket. Already a very good rim protector, John has all the tools to be an elite shot blocker.

20) Vyctorius Miller (6’5”, 185) Forward, Crean Lutheran High School, AZ: Vyctorius is able to score from 3 levels and create offense at will. Vyctorius has great athleticism and a smooth game.

21) Jamari Phillips (6’2”, 185) Guard, Modesto Christian High School, CA: Jamari Phillips is known for his shooting ability. Jamari ability to attack the rim, get into his bag and get his teammates involved in the offense. Also his ability to get players energized on defense.

22) Donavan Freeman (6’7”, 190) Forward, St. John’s College High, DC: Donavan is a very good prospect with a high basketball IQ. Donavan has a nice long wirey frame. Depending on Donavans development he could be one of the best players out of this class.

23) Cameron Scott (6’6”, 185) Forward, Lexington High School, SC: Cameron Scott got size and length and awesome above the rim ability, and he’s just getting started. Cameron is a dynamic athlete who makes the game look effortless. Cameron is an incredibly fluid wing prospect with elite upside.

24) Somto Cyril (6’10”, 235) Center, Hamilton High Christian Academy, TN: Somto Cyril has quickly built a strong reputation as a rim protector. He has outstanding size, strength and athleticism and plays with a high motor.

25) Jase Richardson (6’3”,170) Guard, Bishop Gorman High School, NV: Jase Richardson is a guard who can play the point or off the ball. Jase can make shots from deep, gets to the rim and has big time potential as an on the ball defender.