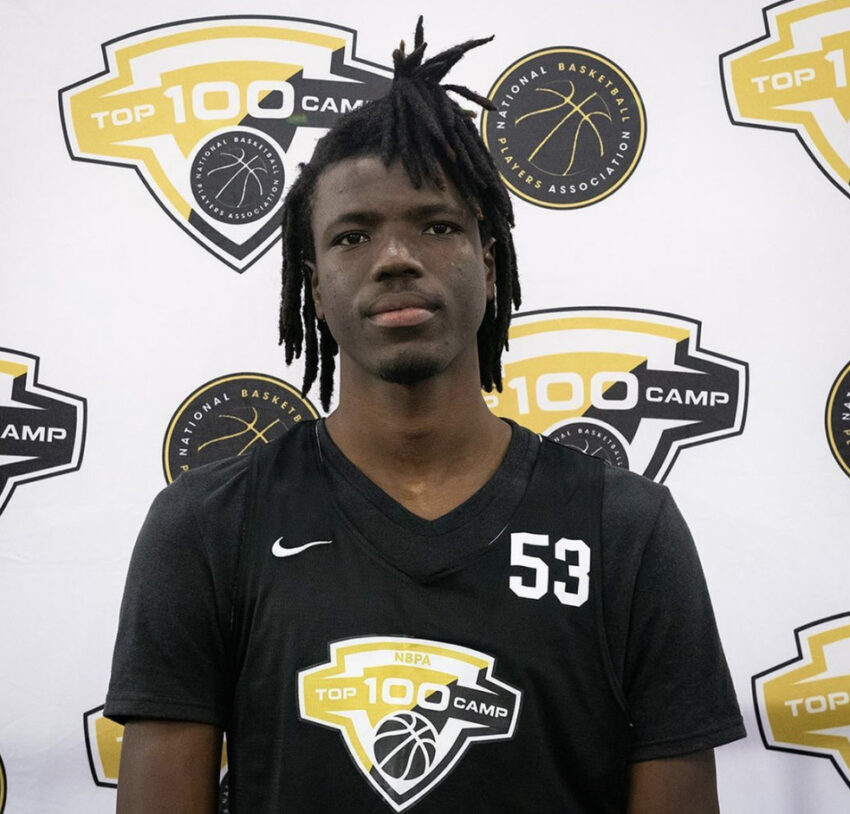 1) #53 Baye Fall (ATL): 6’11”, Center, Accelerated School, 2023 – Baye Fall was making an impact all over the court for the last day of camp. Baye continues to display his motor on both ends of the court. Baye was a beast on the glass during all three games today. Baye was getting the ball out on the break showing off his passing ability. Baye has a good touch around the rim but usually flushes every ball he gets in the paint. Baye plays through contact and doesn’t care who is under the rim.

2) #26 Bryson Warren (PHX): 6’2”, Guard, Overtime Academy, 2023 – Bryson Warren was terrific for his squad today being a floor general. Bryson has a high IQ for the game. Bryson is a wonderful playmaker that makes the game so easy for his teammates. Bryson’s ability to hit the three-pointer at a high clip opens so much for himself and his teammates. Bryson can score on all three levels. Bryson is a guard that has no problem getting in the paint to grab boards and start the break or pass up.

3) #71 Gregory (GG) Jackson (PHX): 6’10”, Forward, Ridgeview HS, 2023 – Gregory “GG” Jackson has had an overall great camp and has displayed why he is the best player in his class of 2023. Gregory has a nice mid-range game. Gregory has a solid handle that allows him to get into the paint and finish with his nice touch. Gregory follows up on the glass with nice tip-ins. Gregory is always banging in the paint and cleaning the glass. Gregory has a nice skill set in the post. Gregory brings so much energy to his team that it’s contagious.

4) #77 Cameron Boozer (LAL): 6’8”, Forward, Christopher Columbus HS, 2025 – Cameron Boozer is one of the youngest players ever to be named to the NBAPA Top 100 camp “All-Star Team”. Cameron has great size and skill for his age and he displayed that at camp. Cameron is a good shooter off catch and shoot. His ability to play through contact and finish is wonderful. Cameron is a very active player, especially when grabbing boards. Cameron has a nice handle and can make plays in transition.

5) #96 Comeh Emuobor (HOU): 6’5”, Guard, Brewster Academy, 2023 – Comeh Emuobor is an athletic guard that plays above the rim. Comeh moves well without the ball. Comeh is a problem downhill as he can’t be stopped and draws contact a lot of the time. Comeh hits the three-ball very well. Comeh is a tough player and is always active on the glass.

6) #31 Dennis Parker (MIA): 6’5”, Forward, John Marshall HS, 2023 – Dennis Parker is a very athletic player that really displayed a lot during day 3 of camp. Dennis plays above the rim either it be catching lobs or dunking in transition. Dennis attacks downhill and has an incredible layup package as he finishes with so much finesse it’s a beauty to see. Dennis plays with so much swagger and his playmaking ability matches it as he can throw behind-the-back passes on a fastbreak. Dennis is a coast-to-coast threat every time he gets the rock.

7) #50 Reed Shepard (CHI): 6’3”, Forward, North Laurel HS, 2023 – Reed Shepard has a nice feel for the game. He plays well off the ball with his ability to be a cutter on offense. Reed displayed his shooting ability by knocking down the long ball. Reed was making an impact on the glass getting in the paint to grab boards with the bigs. Reed being a shooter helps him when defenders press up on him he gets by them and to the cup. Reed can score on all three levels.

8) #75 Omaha Biliew (BOS): 6’8”, Forward, Link Year Prep, 2023 – Omaha Biliew has a very nice skill set and good footwork. Omaha has a nice handle for his size and is bouncy when he is going downhill. Omaha is a strong player that rarely flinches at contact as he converts and ones often. Omaha has a high motor and runs the floor on both ends.

9) #23 KJ Lewis (PHX): 6’4”, Guard, Chapin HS, 2023 – KJ Lewis is a shooter, especially off catch and shoot. KJ is a threat when he is on the floor and it opens up so much for his teammates. KJ plays the right way by pushing the ball up and passing to the open man. KJ is active on the glass just doing a little bit of everything.