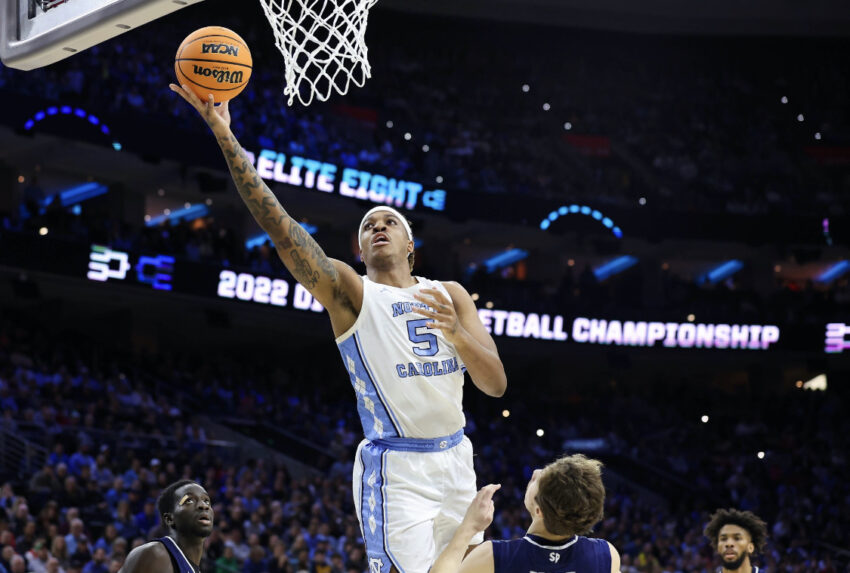 This NCAA tournament has been full of surprises but what else would you expect its March Madness. Coming into the Sweet Sixteen and Elite Eight we witnessed some great matchups from historic programs to programs making history. As the tournament continues we have seen stellar performances from so many players that have stepped up for their team when called upon. With that being said Anthony Forrester gives you a look at his Top Ten Performers from the Sweet Sixteen and Elite Eight.

1) Armando Bacot (North Carolina) -Armando has made his presence felt this season but especially in the NCAA tournament. Coming into the Sweet Sixteen matchup versus UCLA Armando added to his list of double-doubles scoring 14 points and 15 rebounds. No matter what team the North Carolina Tarheels play Armando is a force in the paint when it comes to be aggressive on the glass or finishing at the rim with authority. Going into the Elite Eight Armando and the Tarheels played the cinderella team of the tournament in Saint Peters. In that game Armando put up 20 points, 22 Rebounds, 2 blocks, and a assist adding yet another double-double. Armando was named the most outstanding player in the East Region and is a huge reason why North Carolina will be heading to the FInal Four.

2) Caleb Love (North Carolina) – Caleb Love is a dynamic guard that impacts the game in so many different ways. In the Sweet Sixteen the North Carolina Tarheels called on Love offensively to help them in a battle versus the UCLA Bruins. Love was on fire from deep hitting 6-13 from three point range and ending the game with 30 points. Everytime the Tarheels needed a basket they could depend on Love he was making contested jumpers as well as making key baskets down the stretch to secure the win. Caleb is capable of these performances any given night and UNC will need that as they head to the Final Four versus Duke.

3) Paolo Banchero (Duke) – Paolo Banchero is a big time player that shows up when the Blue Devils need him. He has done it all season and has continued that during the tournament. Coming into the Sweet Sixteen the Blue Devils matched up against the Texas Tech Red Raiders and Paolo didn’t disappoint. Paolo left his mark all over this game with 22 points, 4 rebounds, 4 assists, and 3 steals in a win. Paolo was lights out from deep going 3-4 from the field. Paolo skill set and the way he finishes you can just tell the young man is a future pro. Paolo played well in the Elite Eight versus Arkansas Razorbacks putting up 16 points, 7 rebounds, 3 assist, 1 steal, and a block while getting the win. Paolo has been key for the Blue Devils and he will look to continue his great play in the FInal Four.

4) Jermaine Samuels (Villanova) – Jermaine Samuels is one of the most consistent players on Villanova. Coming into the Sweet Sixteen Villanova was playing a hard nose Michigan team and Jermaine didnt back down. He put up 22 points, 7 rebounds, 2 steals, 2 blocks, and a assists in a win over the Wolverines. He showed that he can play hard and impact the game on multiple levels. He followed that up with a double-double in the Elite Eight versus another tough team in the Houston Cougars. Jermaine put up 16 points and 10 rebounds in the victory over Houston. Jermaine continues to play aggressive and do whatever his team needs. The Villanova Wildcats are headed to the Final Four and Jermaine is a big reason why.

5) Mark Williams (Duke) – Mark Williams and the Blue Devils have looked stellar throughout the tournament. In the Sweet Sixteen they faced Texas Tech and Mark played hard like he always does. Mark was a beast in this game putting up 16 points, 8 rebounds, and 3 blocks in a win. Mark impacts the game so much on both ends starting with the defensive end he is an anchor for the defense altering shots and making things difficult. On the offensive end Mark dominates the paint scoring with authority. In the Elite Eight it was more of the same for Mark in his matchup versus the Arkansas Razorbacks. Mark posted a double-double in this game with 12 points and 12 rebounds while going 100% from the field. In this win against Arkansas Marks defense effort was there as he tallied 3 blocks and was making it tough in the paint all night. Mark and the Blue Devils return to the final four with unfinished business against the North Carolina Tarheels.

6) Kameron McGusty (Miami) – Kameron McGusty was stellar in the Sweet Sixteen versus Iowa State. Kameron was scoring at a high level while still impacting the game on the defensive end. In this matchup against Iowa State he put up 27 points, 6 rebounds, 4 steals, and a assist. Kameron was shooting the ball well from deep hitting 4 out of 7 shots. Kameron really stepped up when the Hurricanes needed him and was a big reason why they had the ability to play in the Elite Eight.

7) Jaylin Williams Forward (Arkansas) – Jaylin Williams had an outstanding game in the Sweet Sixteen matchup versus Gonzaga. Jaylin ability to stretch the floor makes him so versatile and helped him in this game especially matching up with Gonzagas bigs. Jaylin had 15 points, 12 rebounds, 3 assist, and a block. Putting up a double double in a upset victory over 1 seeded Gonzaga to help Arkansas reach the Elite Eight was great for the Razorbacks.

8) Remy Martin (Kansas) – Remy Martin came up big time for the Kansas Jayhawks in the Sweet Sixteen. In this matchup versus Providence it was a tough game even though Kansas is a 1 seed doesnt mean it was going to be a cake walk. Providence gave their best effort but Remy was terrific. In this game Remy had 23 points, 7 rebounds, 3 assists, and a block. The tempo Remy plays with and his ability to be a floor general was key for him in this matchup. This is why he came to Kansas for the chance to play in these big games and he didnt disappoint.

9) Kyler Edwards (Houston) – Kyler Edwards transferred to Houston because he believed they could do something special this season. So getting to the Sweet Sixteen was special for him at his next school but he showed up big time when the Cougars needed him. Kyler dropped 19 points, 5 rebounds, 3 assists, and a steal. Kyler was shooting at a high clip in this game going 5-9 from three point. Kyler brings that energy that gets the cougars going and glad he could make it to the Elite Eight this season.

10) Jamal Shead (Houston) – Jamal Shead and the Houston Cougars came into the Sweet Sixteen matchup agains the 1 seeded Arizona Wildcats. Jamal put together an all around game for the Cougars in the upset victory scoring 21 points, 4 rebounds, 6 assists, and 2 steals. Jamal ability to get it done on the offensive side of the ball as well as defensively was huge for the Cougars. To Jamal and the rest of the Cougars this wasnt an upset they believed they belonged in the Elite Eight and they did just that.