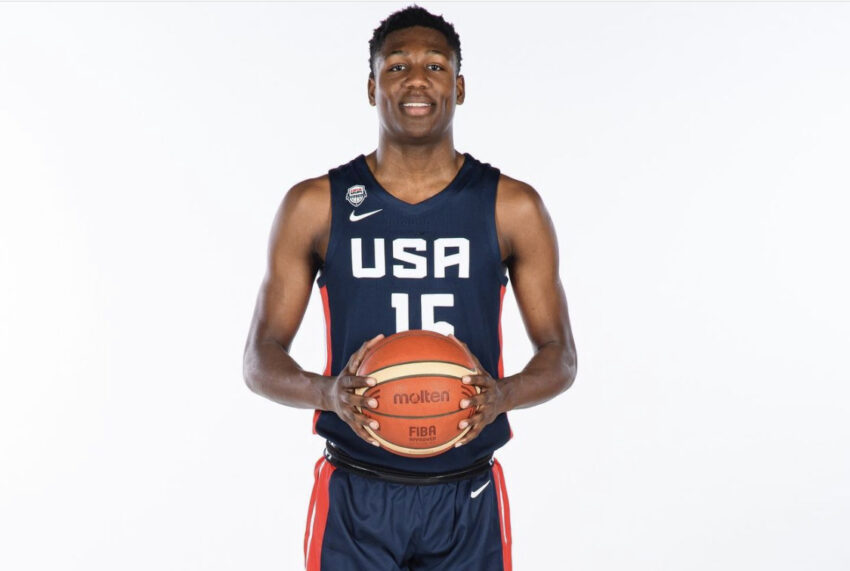 As I look at the current landscape of the high school ranks and future college and pro prospects. These next couple of years are pivotal for players’ development to continue on the path to success. With that Anthony Forrester, gives you his top 25 players from the class of 2023-2026.

1) GG Jackson (2023) – 6’9”, 210 – Forward – Ridge View, SC – North Carolina: GG Jackson’s size and length make him a force as he is still filling in his body. GG is slowly expanding his offensive game and it’s coming along really well. GG has a high motor and is a heartbeat for any team he is on.

2) DJ Wagner (2023) – 6’3”, 165 – Guard – Camden, NJ: DJ Wagner son of Dajuan Wagner is a prospect with incredible handles making him a tough cover. His ability to score is off the charts as he has the ability to score from all three levels. He’s lightning-quick with the ball and excels at taking his man off the dribble and getting to the rim.

3) Nassir Cunningham (2024) – 6’7”, 175 – Forward – Gill St. Bernard’s School, NJ – Overtime Elite: Nassir is a unique prospect who leaves his mark on the game every time he steps on the court. Nassir’s length and athleticism mixed together on the court make him a unicorn. He can score at the rim with ease and has a very good offensive game.

4) Ian Jackson (2024) – 6’5”, 180 – Forward – Cardinal Hayes High School, NY: Ian impacts the game on both sides of the basketball with his energy that compliments his overall game. His athletic ability allows him to be dominant in transition which opens other areas of his game and makes him a tough cover. Ian can score the basketball off the dribble as well as catch and shoot which makes him such a threat on the floor.

5) Robert Dillingham (2023) – 6’2”, 165 – Guard – Donda Academy, CA: Robert Dillingham is a guard that play makes well for his teammates. Robert’s speed and athleticism open up so many things on the floor when he drives in the paint. Robert has insane bounce and can finish at the rim at a high level.

6) Mackenzie Mgbako (2023) – 6’8”, 200 – Forward – Gill St Bernard S School, NJ – Duke: Mackenzie Mgbako is a versatile prospect he can battle in the paint and play on the perimeter. Still developing a consistent three-point shot that will help him at the next level.

7) Kwame Evans Jr. (2023) – 6’9”, 200 – Forward – Montverde Academy, FL: Kwame Evans Jr. is a very good prospect with great size. Kwame has a long wingspan which helps him on the defensive end as well as on the offensive end when it comes to finishing around the rim.

8) Ron Holland (2023) – 6’8”, 195 – Forward – Duncanville, TX: Ron Holland brings a defensive presence in the paint as well as being a force on the offensive end. Ron can handle the ball on the perimeter and that mixed with his athleticism makes him a force on the wing.

9) Isaiah Elohim (2024) – 6’4”, 185 – Forward – Sierra Canyon High School, CA: Isaiah Elohim is not a freak athlete but has good size, bounce, and all the physical tools. Isaiah is able to bully his way into the lane against the competition. Isaiah is a strong, compact, and aggressive shooting guard. Isaiah rises up smoothly for his jumper and has a great touch and an overall great feel for scoring the ball.

10) Matas Buzelis (2023) – 6’9”, 175 – Forward – Brewster Academy, NH: Matas Buzelis has a versatile skill set at his size. Matas’s passing abilities stand out when you look at his game. His handles and IQ make him a good playmaker.

11) Tre Johnson (2024) 6’4”, 180 – Guard – Lake Highland High School, TX: Tre is a very good jump shooter off the catch or utilizing the rhythm dribble and he loves the mid-range game. Tre is a long and lean perimeter prospect who shows a sweet stroke. Tre is tremendously skilled and has a good feel for the game.

13) Trentyn Flowers (2024) – 6’6”, 175 – Forward, Sierra Canyon High School, CA: Trentyn Flowers has the size, length, and vast skill set to legitimately fit in anywhere on the court. Trentyn is an elite athlete, a feisty rebounder on both ends, guards multiple positions, and plays with an unrelenting motor. Trentyn is like a swiss army knife. Trentyn can knock down shots from the perimeter as well as taking guys down to the post.

14) Justin Edwards (2023) – 6’7”, 180 – Forward – Imhotep Institute, PA: Justin Edwards has tremendous length which helps him be an effective defender. Justin can play out of the post as well as stretch the floor to the perimeter.

15) JJ Taylor (2023) – 6’8”, 185 – Forward – Donda Academy, CA: JJ Taylor is a player that shines when driving to the hoop. He has an elite first step that allows him to get in the lane and show off his athleticism as he finishes around the rim. JJ can stretch the floor with his ability to shoot from the outside mixed with his handles of the basketball.

17) Baye Fall (2023) – 6’10”, 205 – Center – Denver Prep, CO: Baye Fall is a big man who is athletic at the rim and his shot-blocking ability. He can defend well on the pick-and-roll and has been working on his touch. His length plays a pivotal role and runs the floor well for his size.

18) Tyrese Proctor (2023) – 6’4”, 170 – Guard – NBA Global Academy, AUSTRALIA – Duke: Tyrese Proctor is a high-level athlete that can make plays above the rim. Proctor is a natural scorer who can score in isolation and get into the lane at will. got a smooth jumper with deep range and a great ability to get his own shot.

19) Bryson Tucker (2024) – 6’5”, 180 – Forward -Mount St. Joseph High, MD: Bryson Tucker has a mature body and game, a smooth shooting stroke, and is as fundamentally sound as they come. Nothing in Bryson’s game seems to ever be rushed, he plays at his own pace. Bryson can make shots with a confident pull-up. He has great size to go with a natural basketball IQ.

20) Mikey Williams – 6’2”, 175 – Guard – Vertical Academy, NC: Mikey Williams is a combo guard who looks to score first and has an attacking style. He’s a scoring machine who can get really hot. He can shoot the outside shot, has a mid-range game, and really excels at using his elite burst to get into the lane.

21) Kylan Boswell (2023) – 6’1”, 180 – Guard – Compass Prep, AZ – Arizona: Kylan Boswell plays with a great pace and is controlled at the guard spot. Kylan is a playmaker especially out of the pick and roll. Kylan is the type of guard that set the tone on defense.

22) Ja’Kobe Walter (2023) – 6’5”, 180 – Guard – McKinney, TX: Ja’Kobe Walter is one of the consistently productive and fundamentally sound shooting guards in his class. He shoots a set shot but he is a consistent shooting threat from the three-point line. He does a good job on the defensive end with his ability to defend both wing positions given his size, length, and activity.

23) Cameron Boozer (2025) – 6’8”, 215 – Forward – Christopher Columbus High School, Florida: Cameron Boozer is a very good player in transition and finishes strong at the rim. When it comes to contact Cameron embraces it and still finishes through his opponent. Cameron is a good presence in the paint as he is a good shot blocker. Cameron plays above the rim and is a lob threat at any moment.

24) Koa Peat (2025) – 6’8”, 215 – Forward – Perry High School, Arizona: Koa Peat is a very crafty forward that finishes with authority at the rim. Koa can stretch the floor and shoot the three-ball well. Koa has the handles to dribble in transition and make a play. Koa’s length and instincts help him be a very good shot blocker. Koa is hard to stop when he attacks downhill.

25) Jayden Moore (2026) 5’10”, 170  – Point Guard – Hopkins, Minnesota: Jayden Moore is the best guard in his class and arguably the best player. Jayden is a very crafty guard that blows by defenders with his quickness. Jayden is a good three-point shooter in the catch and shoots and off the dribble. Jayden has a good IQ for the game and you can see that in his playmaking ability. Especially in the pick and roll and when headed to the paint, he attacks it with a purpose. Jayden is active on defense with his quick hands really disrupt offenses.