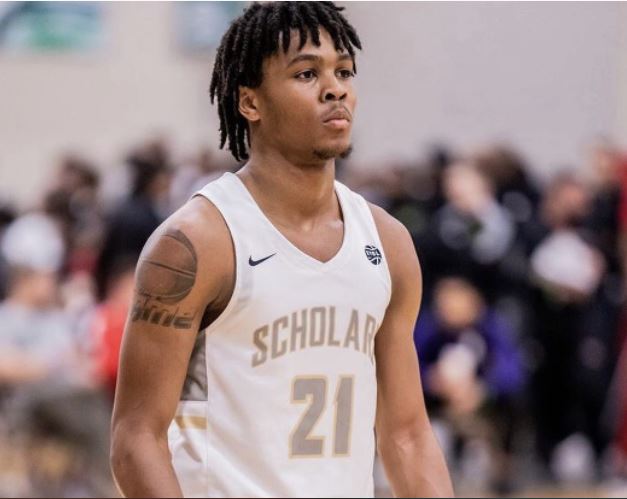 Here is our spring edition list of the Top 50 Recruiting Prospects from The Hoop Post for the Class of 2023.

1) DJ Wagner – 6’3”, 165 – Guard – Camden, NJ: DJ Wagner son of Dajuan Wagner is a prospect with incredible handles making him a tough cover. His ability to score is off the charts as he has the ability to score from all three levels. He’s lightening quick with the ball and excels at taking his man off the dribble and getting to the rim.

2) GG Jackson – 6’9”, 210 – Forward – Ridge View, SC – North Carolina: GG Jackson size and length makes him a force as he is still filling in his body. GG is slowly expanding his offensive game and its coming along really well. GG has a high motor and is a heartbeat for any team he is on.

3) Kwame Evans Jr. – 6’9”, 200 – Forward – Montverde Academy, FL: Kwame Evans Jr. is a very good prospect with great size. Kwame has a long wingspan which helps him on the defensive end as well as on the offensive end when it comes to finishing around the rim.

4) Mackenzie Mgbako – 6’8”, 200 – Forward – Gill St Bernard S School, NJ – Duke: Mackenzie Mgbako is a versatile prospect he can battle in the paint and play on the perimeter. Still developing a consistent three point shot that will help him at the next level.

5) Robert Dillingham – 6’2”, 165 – Guard – Donda Academy, CA: Robert Dillingham is a guard that play makes well for his teammates. Robert speed and athleticism opens up so many things on the floor when he drives in the paint. Robert has insane bounce and can finish at the rim at a high level.

6) Ron Holland – 6’8”, 195 – Forward – Duncanville, TX: Ron Holland brings a defensive presence in the paint as well as being a force on the offensive end. Ron can handle the ball on the perimeter and that mixed with his athleticism makes him a force on the wing.

7) Matas Buzelis – 6’9”, 175 – Forward – Brewster Academy, NH: Matas Buzelis has a versatile skill set at his size. Matas passing abilities stands out when you look at his game. His handles and IQ make him a good playmaker.

8) Marquis “Mookie” Cook – 6’7”, 200 – Forward – Compass Prep – Oregon, AZ: Mookie Cook has a nice frame that he is still growing into. He size makes him an intriguing prospect on the wing.

9) JJ Taylor – 6’8”, 185 – Forward – Donda Academy, CA: JJ Taylor is a player that shines when driving to the hoop. He has an elite first step that allows him to get in the lane and show off his athleticism as he finishes around the rim. JJ can stretch the floor with his ability to shoot from the outside mixed with his handles of the basketball.

10) Omaha Biliew – 6’8”, 200 – Forward – Link Academy, MO: Omaha Biliew is a stretch 4 that can open up the floor for his team. He can switch on the defensive end when needed. Omaha is scary in transition and in the open court.

11) Baye Fall – 6’10”, 205 – Center – Denver Prep, CO: Baye Fall is a big man who is athletic at the rim and has shot-blocking ability. He can defend well on the pick-and-roll and has been working on his touch. His length plays a pivotal role and runs the floor well for his size.

12) Tyrese Proctor – 6’4”, 170 – Guard – NBA Global Academy, AUSTRALIA – Duke: Tyrese Proctor is a high-level athlete that can make plays above the rim. Proctor is a natural scorer who can score in isolation and get into the lane at will. got a smooth jumper with deep range and a great ability to get his own shot.

13) Justin Edwards – 6’7”, 180 – Forward – Imhotep Institute, PA: Justin Edwards has tremendous length which helps him be an effective defender. Justin can play out of the post as well as stretching the floor the the perimeter.

14) Caleb Foster – 6’5”, 190 – Guard – Oak Hill Academy, VA – Duke: Caleb Foster plays with excellent poise and pace and makes sound decisions with the basketball. He makes open threes and pull-up jumpers. He has a mature floor game which is shown in his court demeanor and savvy. Foster is a tough and smart point guard with terrific size for the position.

15) Kylan Boswell – 6’1”, 180 – Guard – Compass Prep, AZ – Arizona: Kylan Boswell plays with a great pace and controlled at the guard spot. Kylan is a playmaker especially out of the pick and roll. Kylan is the type of guard that set the tone on defense.

16) Mikey Williams – 6’2”, 175 – Guard – Vertical Academy, NC: Mikey Williams is a combo guard who looks to score first and has an attacking style. He’s a scoring machine who can get really hot. He can shoot the outside shot, has a mid-range game and really excels at using his elite burst to get into the lane.

17) Stephon Castle – 6’6”, 205 – Guard – Newton, GA – UCONN: Stephon Castle is an excellent passer and does a good job of taking care of the ball and is a good decision maker. He thrives in transition where he has a knack for making the right play. Stephon plays downhill bully ball and his awareness on the offensive end is the most impressive part of his game.

18) Simeon Wilcher – 6’4”, 185 – Guard – Roselle Catholic, NJ – North Carolina: Simeon Wilcher is a combo guard and shows his ability to handle the ball, but also score from a variety of areas on the court when needed. Wilcher will often pick-up opposing players full-court and he is also very active in the passing lanes and creating fast break opportunities.

19) Ja’Kobe Walter – 6’5”, 180 – Guard – McKinney, TX: Ja’Kobe Walter is one of the consistently productive and fundamentally sound shooting guards in his class. He shoots a set shot but he is a consistent shooting threat from the three-point line. He does a good job on the defensive end with his ability to defend both wing positions given his size, length, and activity.

20) Reed Sheppard – 6’3”, 170 – Guard – North Laurel, KY – Kentucky: Reed Sheppard is a good athlete who can makes plays in traffic. Capable of attacking left or right and finishing with strength. Is a lights out shooter with perfect technique and a quick release.

21) Marvel Allen – 6’4”, 190 – Guard – Calvary Christian Academy: Marvel Allen can get to the basket with his quickness. Marvel likes the mid-range pull-up it something he gets to when getting pass defenders. On the defensive end he can really lockdown opposing guards.

22) Kanaan Carlyle – 6’2”, 170 – Guard – Milton, GA – Stanford: Kanaan Carlyle has an elite first step and blow-by ability and overall top end athleticism. Kanaan has a nice pull-up game and can score in 1 on 1 situations, taking defenders all the way to the rim or getting into his mid-range game. On the defensive end Kanaan really gets after it pressuring the ball and using his elite quickness to disrupt in the passing lanes.

23) Elijah Fisher – 6’6”, 195 – Guard – Crestwood Prep, ON: Elijah Fisher is a versatile player, able to play on or off the ball. Elijah is a above the rim player who can jump out of the gym and overpower opponents. Elijah shows good court awareness and heads-up passing ability while also being able to take over games with his scoring.

24) Taylor Bowen – 6’9”, 195 – Forward – Brewster Academy, RI: Taylor Bowen is a very skilled player. He has great handles for his size. He plays aggressive on the offensive end which helps him get to the line. Taylor has a nice shooting stroke for his size.

25) Isaiah Collier – 6’3”, 190 – Guard – Wheeler, GA: Isaiah Collier is one of the best in his class in his ability to make the assist. On the defensive side of the ball, he does a solid job of getting into ball handlers and keeping his man in front of him. Collier plays with a tremendous amount of confidence and is a point guard who is fun to watch when the momentum of a game is on his side.

26) Aden Holloway – 6’1”, 165 – Guard – La Lumiere, NC: Aden Holloway is a three level scorer and displayed that over the weekend from the three ball, to the floater, to maneuvering through traffic to get to the hoop. Aden is a traditional point guard that commands the offense and keeps the engine going for his team.

27) KJ Lewis – 6’4”, 185 – Guard – Chapin, TX – Arizona: KJ Lewia has good size and a chiseled frame. KJ is a plus rebounder for a wing guard and has all of the tools to be a big time defender. KJ loves to attack the rim in both the halfcourt and transition and once he gets their he finishes through with slams or has touch on various finishes in the paint.

28) Aaron Bradshaw – 7’0”, 210 – Center – Camden, NJ: Aaron is a 7-footer that plays with a high motor. His ability to bang in the paint and finish things around the rim are good. Aaron has a nice touch on his jumper especailly at his size.

29) Sean Stewart – 6’8”, 210 – Forward – Windermere, FL – Duke: Sean Stewart is versatile, athletic, plays with a high motor and makes for a multi-positional defender, an impressive rebounder and shot-blocker who can face-up and score on the offensive end.

30) Jeremy Fears – 6’1”, 165 – Guard – La Lumiere School, IN – Michigan State: Jeremy Fears plays with poise and composure but has a quick burst to the basket going either direction. Has a top notch ability to draw defenders and deliver a timely and accurate pass. Finishes well around the rim.

31) Taison Chatman – 6’4”, 170 – Guard – Totino-Grace, MN: Taison Chatman has an impressive combination of size and skill that is shining through so far. Taison is a player that will do whatever is needed of him the total team player.

32) London Johnson – 6’4”, 165 – Guard – Norcross, GA: London Johnson owns a solid skillset scoring the basketball from each level of the floor when the option is there. London plays with an even keel at all times as he is very cerebral and displays great feel as a passer.

33) Dra Gibbs-Lawhorn – 6’0”, 165 – Guard – Real Salt Lake Academy, UT – Purdue: Dra is a tough guard that has a chance to be special. His ability to control the game and take over when needed is key for him.

34) Kris Parker – 6’6”, 170 – Guard – Crossroad Academy, FL: Kris has Excellent length and ball skills for quick drives and jumpers. He utilizes his frame, creating for himself, as a playmaker for others and as a defender.

35) Jared McCain – 6’2”, 175 – Guard – Centennial, CA – Duke: Jared McCain is a lethal shooter with great range who has the ability to make shots under duress. He’s quick and shifty and adept at getting into the lane to make plays for himself and his teammates.

36) Miro Little – 6’4”, 185 – Guard – Helsinki Basketball Academy, Finland – Baylor: Miro Little is a fun player to watch. He does a little bit of everything on the floor, from the offensive side to the defensive side.

38) Wesley Yates – 6’4”, 200 – Guard – Beaumont, TX: Wesley Yates a tremendous scorer off the bounce, Yates can play on the ball and will be reliable at the next level as a secondary ball-handler. He also can play above the rim as he is all the more explosive with momentum on his back. Defensively, he guards with physicality and slides his feet well.

39) Assane Diop – 6’10”, 190 – Center – Denver Prep Academy, CO: Assane Diop has great frame and is only going to get stronger. He plays with a lot of effort and is always improving his game. Assane is going to be a name to remember.

40) Chris Johnson – 6’5”, 180 – Guard – Elkins, TX: Chris Johnson a gifted passer, Johnson has an excellent feel for the game and matching skills with great size. Defensively, Chris is known for being the ultimate competitor and it shows in the way he competes on that end. Chris is known for his work ethic, but also just knows how to play on both ends with a good natural instinct for the game.