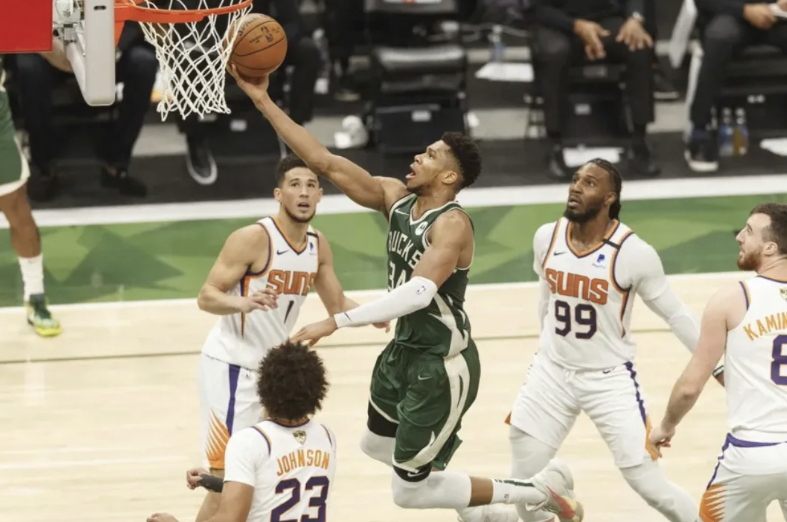 Reigning two-time NBA Regular Season MVP Giannis Antetokounmpo asked for a substitution just three minutes into the first quarter. In any other setting, such a request would be met with no critique whatsoever, especially given the lingering injury “The Greek Freak” had originally suffered just two weeks ago.

However, this was Game 3 of the NBA Finals. Not a Game 1, not a Game 2 but a Game 3 that was every bit pivotal in circumstance.

At the start of the NBA Finals, The Milwaukee Bucks — following a series clinching Game 6 victory over the Atlanta Hawks in the Eastern Conference Finals — looked to contend against a red-hot Phoenix Suns team coming in with an overall playoff record of 12-4. As previously alluded to, the Bucks superstar player in Giannis had sustained an injury in Game 4 of the Eastern Conference Finals against the Hawks, and had missed the final two games of the series.

This also made him a game-time decision for an NBA Finals Game 1 that had a two-day turnaround from the conclusion of the Hawks series; which, at no surprise, proved to be irrelevant in preventing The Freak from missing a moment like such.

The Bucks, who began the Finals equipped with their most valuable player, performed as if he was absent in Game 1. They were terrible on defense, misdiagnosing the pick-and-roll and over-helping on ball rotations. In turn, these out of position scenarios allowed for the Suns’ players to draw fouls, as Phoenix collectively had 10 more free-throw attempts then the Bucks did. This clearly was one of the differing factors in the game, as both teams put up a total of 88 shot attempts, the Bucks converting just one bucket fewer.

On offense, Milwaukee lacked the ability to create separation, or to even end a possession with a shot attempt — the Bucks doubled the Suns in turnovers with 18 compared to the Suns’ nine. Overall, they were stagnant running their offensive sets, most of the time checking to an all-too-often seen Giannis post-up in the mid to high-post area. Most of these possessions resulted in a hard dribble drive that failed to find the bottom of the net, or a kick-back to a shooter who was forced to create on his own late in the shot-clock. None of these types of possessions ended in made-baskets. Even when the Bucks went to a small-ball lineup with Pat Connaughton off the pine, they failed to utilize Giannis in any of the actions, allowing for Suns defenders to stunt or double, again, causing turnovers.

This was thought to have changed in Game 2, as Milwaukee had won two out of three of such matchups in the previous rounds of the playoffs. However, this was just simply not the case. The Bucks began the game playing drop coverage on pick and roll actions, most of them being when Brook Lopez was covering the drag screener. Lopez, who stands at a modest 7’0, was able to position himself better in the converges; however, playing drop allowed for creators like Paul and Booker to take hard dribble drives causing the defense to over-help, and in turn, resulting in corner kicks for made 3-point baskets. This is what kept the Suns in the game during the early stages as the Bucks were able to create some looks in the halfcourt for Giannis.

Nevertheless, this did not last long as the Suns outscored the Bucks 30-16 in the second quarter. At this point, the Phoenix Suns players were playing at their best, passing up a good shot for a great one and using the Bucks’ lack of defensive continuity to their advantage. One play that summed this up — very appropriately — was a ten-pass sequence that ended in an and-one opportunity; a laughable outcome by a Bucks team who’s calling card in the regular season was defense.

Throughout the game, however, Giannis Antetokounmpo shined. He was the one bright spot for the Bucks offensively, particularly in the third quarter when he scored 20 of the Bucks 33 points. The other “All-Star” caliber players in Khris Middleton and Jrue Holiday were nowhere to be found, shooting a combined 12-for-37 from the field (32.4%); and yet again, The Greek Freak was dominating on his own, maintaining the mindset that his team would not lose the game.

All of the scoring, the tough fadeaways off one leg, the hard dribble drives for potential and-one contact, the post-ups that ended in baseline jumpers, were no match for what the Bucks were really lacking from their star player: the ability to create for others.

In the case of a player like Giannis, this is not by any means a reference to having a 10-plus night in the assist department. Rather, it is referring to his natural ability to create for others by the position he puts himself in on the offensive end of the floor — where he’s catching the ball, how he’s catching it, whether he’s involved in the pick and roll action or not.

All of these intrigues are meritable, and Giannis, in a must-win situation during Game 3 of the NBA Finals, did exactly just that.

He was involved in the pick-and-roll, a lot of times acting as a screener at the top of the key and either rim-running, catching the pass to score, or catching it to look for a teammate on the drop-off. Not only was The Freak able to create looks out of the pick-and-roll by way of the pass, but also for the ball handler in these sets. In those types of situations, Giannis would attract the defense just by his sheer size and frame. The Suns’ having to overcompensate for Antetokounmpo’s scoring ability, would align disproportionately, allowing for natural spacing to be created on Middleton pull-up jumpers or Holiday dribble-drives. Even when the Suns went to a zone look — which cut the once 15-point halftime deficit to just four — the Bucks were able to string together key offensive possessions, springboarded by Giannis and the difference in his offensive approach.

Game 4 of the NBA Finals is soon approaching. The Bucks have not won back-to-back finals games since the 1971 NBA Finals when they won their first ever NBA Championship. If Game 3 was thought of as pivotal, then Game 4 is considered every bit of that and more. The outcome, undecided at the moment, remains uncertain; one aspect that is a guarantee, however, is that Giannis Antetokounmpo truly is the end all be all when it comes to the Bucks success. Hopefully, for the Milwaukee Bucks sake, he won’t need a sub.