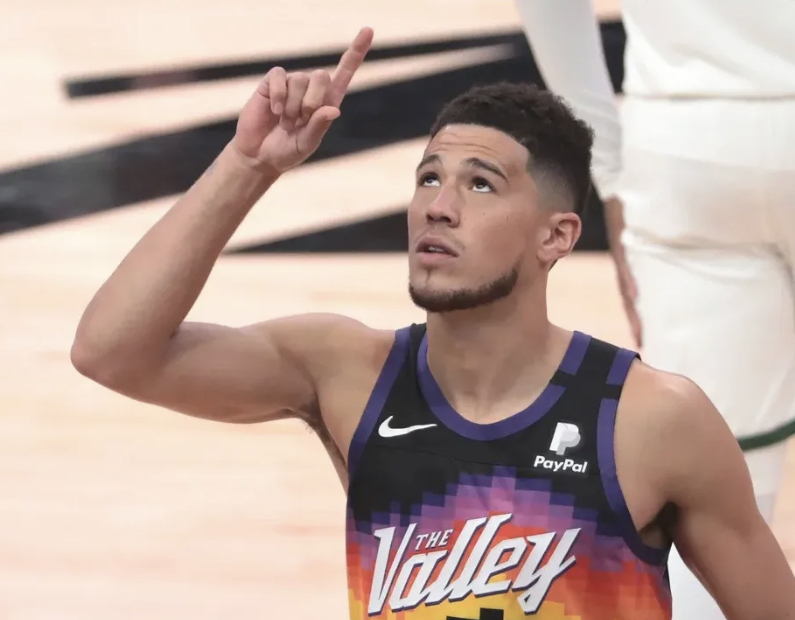 The Merriam-Webster’s dictionary definition for maturation is, simply put, “the process of becoming mature.” For some, this may be an adequate characterization of what it took Devin Armani Booker to become; being on the doorsteps of winning the Phoenix Suns franchise’s first ever NBA title at just 24-years-old. This is — frankly — an insult in its simplisticity, as it fails to truly portray what has transpired within Booker’s first six seasons of NBA basketball.

Perhaps, a more appropriate way to define Devin Booker’s growth is by looking solely at the per season win totals. In sequence, they are: 23, 24, 21, 19, 34, 51. If one were to plot these points, via a line graph or some other form of depiction, they would find that the image displayed closely resembles that of — ironically — a valley. With its definite middle-ground, a low of just 19 wins eclipsed in the 2018-2019 NBA season, it can be said that Booker has truly been at the bottom; and now — as a two-time NBA All-Star and leading scorer on a NBA Finals-bound Suns team — Devin Booker is overlooking the valley he’s climbed out of, at the top of its peak.

“It’s been a long time coming,” said Devin Booker after the Suns’ clinched their first NBA Finals appearance in almost 30 years — doing so with a Game 6 victory over the Los Angeles Clippers in the Western Conference Finals last Wednesday.

“We’ve seen the bottom — the bottom of the bottom for multiple years. Just keeping my head down waiting on this moment right here and Monty [Williams] coming in and building the culture, him leaving us with the ‘preparation meets opportunity’, and that was these moments right here and we took it and we ran with it.”

Booker — making reference to the post-game speech then first-year head coach Monty Williams gave his Phoenix Suns team last year in the NBA’s Orlando bubble after completing an 8-0 stretch — has done more than just prepare for this very moment in his emergent NBA career, he’s lived it.

When the COVID-19 pandemic preemptively ceased the 2019-2020 NBA regular season, the Phoenix Suns were just 26-39, having lost five of their last seven contests. In the Suns’ final game before the infamous March 11, 2020 shutdown, Booker shot an abysmal 36% from the field, going two-for-seven from behind the arc and compiling a box plus/minus of .4 — all of which came in a 16-point blowout to an intra-conference riva in the Portland Trailblazers. In any case, it looked as if Devin Booker — who was named to his first All-Star team as an injury replacement — was ending yet another season below the 30 spot in the win column.

However, as the NBA’s plans to restart began to take shape, the Phoenix Suns would soon find themselves with an opportunity; a chance to compete for a postseason spot in the Orlando bubble.

The Suns wouldn’t have even sniffed the No. 8 seed in the Western Conference had the resumption of play not taken form. Now, with a new “play-in tournament” format being debuted by the league — one that gave the No. 9 seeded team in each conference the chance to make the playoffs if they were two games back from the seed ahead of them –, the forlorned and hopeless feeling that seemed to always strike at seasons end for Phoenix was nothing but a distant memory; a pitfall for those who seek opportunity. Now, the only thing the Suns could do was rise up. All it would take was for Devin Booker to “be legendary” — a mantra that the late, great Kobe Bryant had signed onto Booker’s Kobe shoes, later tattooing on his right forearm after the Black Mamba’s untimely death.

In the bubble, Booker did just that and more. The Suns had to win all eight of their remaining regular season games to even provide a chance for them to make the allusive play-in tournament game. This seemed unreasonable for a team that had failed to win more than five straight games since the 2014-2015 NBA season, and yet Devin Booker understood what an opportunity this was; he was up for the challenge.

In the eight games he played in the bubble, Booker displayed a game that nobody truly had seen on a national stage, not even at the level at which he performed. In that span Booker averaged 30.5 points a contest, shot 50.3% from the field and had an assist to turnover ratio of 2.4 — all of which dwarf his career marks in comparison.

Not only did the counting and advanced stats paint the picture of this, but Booker’s play on the court as well. In prior seasons, Booker had to rely on his own scoring ability just to keep his varying Suns teams in the game. In the bubble, however, Booker was able to display his ability to find his teammates and create for others, and actually had the personnel in players like Mikal Bridges, Cam Johnson, Jevon Carter and Cameron Payne to knock down timely shots. Not only was his passing ability on full display, but also his ability to get any kind of shot when need be was also continuing to show through; only this time, Booker’s shots were much more timely, taking mid-range jumpers out of the pick-and-roll, not settling for long contested shots from behind the three-point line. The old Devin Booker — the sophomore version that scored 70 points in a 2016-2017 NBA regular season loss to the Boston Celtics — was nowhere to be found. No, this Devin Booker was the one that was always there. He was there in the losses, there through the coaching changes, there through the roster overhauls, there through the bottom. Now, he was at the precipice of another opportunity, something much, much greater.

After clinching a trip to the 2021 NBA Finals last week, Phoenix Suns head coach Monty Williams was asked about the moment in the Orlando bubble locker room last year following the Suns failure to make the NBA’s play-in tournament despite going 8-0. Most star players would have left such a situation, forcing a trade to be made and soon departing; but Booker stayed.

When asked how he feels specifically about Devin Booker as quote, unquote “a coach and a friend”, Monty gave this anecdote as reference, “[You know], it takes me back to our first conversation with him at a restaurant in Scottsdale. He looked me right in the eyes and said, ‘Coach, whatever you need me to do, I’ll do it,’ and that was the beginning. So to see him in his position is gratifying, but he be the first to tell you to enjoy it.” (Kellan Olson, Arizona Sports).

Game 1 of the 2021 NBA Finals against the Milwaukee Bucks begins in less than 24 hours. If Devin Booker wins this final series of a spectacular playoff-run, he would have his first NBA championship two years younger and one sooner than when Michael Jordan won his own back in 1991. Much like “His Airness”, Booker has already been through his own trials and tribulations in a young NBA career thus far. And just like Michael, Booker has had to scratch, claw and climb his way out of the metaphorical “valley” that can be the beginning to a legendary NBA career. Only time will tell if Booker’s future may hold the same as one such as MJ’s, but one thing is for sure: no matter what happens, no one can take away what Devin Armani Booker has accomplished thus far; and standing firm above a valley’s peak, the player he is now is the only definition that’s needed.