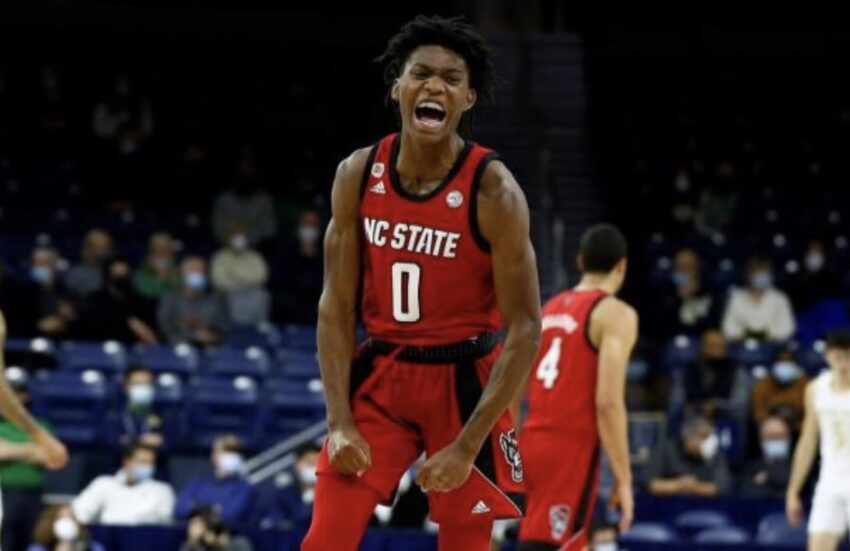 After withdrawing his name from the 2022 NBA Draft, North Carolina State standout Terquavion Smith, has returned for his Sophomore season at N.C. State University. This genius move has opened the doors to the possibility of a potential lottery pick. The native from Greenville, N.C., has had a standout Freshman year performance and now is looking to generate the same buzz during his second season with the Wolfpacks.

Smith was not considered a highly regarded prospect coming out of high school, nor did he garner much interest even though he won three state titles while attending Farmville Central High School. During his Sophomore year, Smith committed to N.C. State to pursue his collegiate career under Coach Kevin Keatts.

Looking back, the irony to Smith’s journey is that there was minimal interest in him as a basketball player. He accepted his first basketball scholarship offer which happened to be N.C. State. Only two other schools joined in his recruitment process, those being the High Point Panthers and East Carolina.

Smith played 25 of the 35 games during his Freshman year at N.C. State but did not become a household name until later in the season. The December 2022 game against Purdue highlighted this youngman’s b-ball abilities. Smith’s talents were front and center on the court that day and scouts took notice as NBA scouts eyed the Boilermakers guard Jaden Ivey. Ivey was in the middle of his dominant Sophomore year as he led his team to the No. 1 spot in the AP Poll.  This ultimately propelled him to become a top-five pick in the NBA draft.

Ivey was expected to play well during the game and although he did not disappoint with an overtime win, his 22 points and seven rebounds seemed to be a bit overshadowed by the rising star.  The N.C. State guard Terquavion Smith, caught the eyes of NBA executives attending.

and garnered their  attention.

Smith’s ascent onto NBA draft conversations for the remaining 2021–22 season was equally stunning. After a strong rookie season, he climbed into the second round of mock drafts, and after an impressive performance at the NBA draft combine, he had become a probable first-round pick.

Smith finished his season with 20 or more points in 12 of his final 21 games, which included the Purdue game. He reached the 30-point plateau twice as well as during that stretch. Additionally, he scored 19 against Duke’s Blue Devils, 34 and 20 against North Carolina in two games. He ended his season averaging 16.3 points over the course of his first year. Now that is impressive!

With those stats, why did Smith choose to return to college basketball when so many others in his shoes would have selected the NBA draft option. Smith explained his reasoning on staying another year rather than transferring or keeping his name in the draft saying, “The love for college basketball. You only get that once. I feel like I have more to prove. I feel like I stayed because I’m big on loyalty. They recruited me at the age of 15, they never switched on me or never lied to me about what I could do at N.C. State.”

With him returning another year, he has picked up right where he left off as he is averaging 18.7 points a game, which places him in the top 50 percentile in the country. Also after averaging 2.1 assists last year, Smith is up to 4.7 assists and 38.4% shooting.

Smith has had seven games this season scoring 20 or more points per game, with four of those coming off his last four games. He also had a season-high of 33 points this season which was against Coppin State in December 2022.

Smith is a frequent scorer but to perform at a top tier level and distinguish himself from others, he must learn to control the ball and carry the majority of the attacking load.

Looking forward, it will be fascinating to see if he can still contribute without making a lot of shots. Early in his future NBA career, Smith may not have the same success as he has had in his collegiate career.