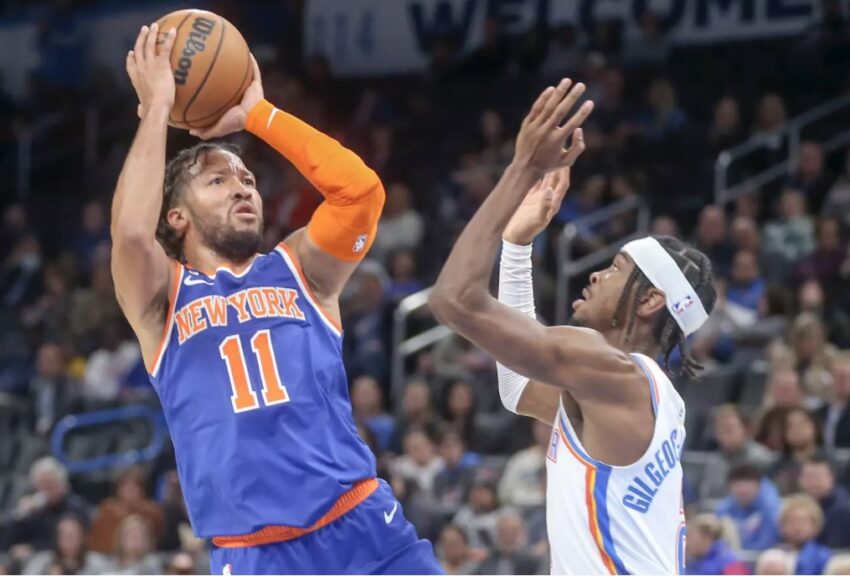 After signing a four-year, $104 million contract with the New York Knicks in the offseason, Jalen Brunson has been a key contributor for the team during the 2022-2023 season. The point guard is averaging 22.2 points, 3.6 rebounds and 6.5 assists per game, while shooting 47.3% from the field and 39.3% from beyond the arc. His leadership and playmaking have been crucial for the Knicks, leading them to a 25-19 record. With Brunson at the helm, the Knicks look poised to make a run in the Eastern Conference.

Last Season, Brunson was a great asset for the Dallas Mavericks alongside Luka Doncic. He averaged 16.3 ppg, 50% from the field, and 37.3 percent from the arc. Switching to the Knicks was the true test for Brunson as last season they were below .500 and didn’t have a super star like Luka for Brunson to play under.

With that being said Brunson has been part of the Knicks turning their program around. Many of that is due to head Coach Tom Thibodeau who also was the coach of Derrick Rose while he was in his prime. Brunson may have exceptional talent, however Thibodeau knows how to utilize his point guards, such as what he did with Derrick Rose, and propel them in a new direction.

Thibodeau excels when it comes to making his point guards useful, and we have seen that through Brunson. The New York Knicks offense revolves around Jalen Brunson’s playmaking abilities. He is a crafty and creative point guard who is adept at creating shots for himself and his teammates. The Knicks have been able to utilize Brunson’s skills by running an offense that emphasizes ball movement and player movement. This allows Brunson to take advantage of mismatches and create open shots for his teammates. The Knicks have also been able to utilize Brunson as a spot-up shooter, which has been a major factor in their success this season. The Knicks also have another threat at point guard which is Thibodeau’s old player Derrick Rose. This goes to show you just how crafty and knowledgeable of a coach Thibodeau is.

With Coach Thibodeau and Brunson attempting to turn this program around, the Knicks have gone from a 35-47 record from last year, to now having a record of 25-19 and being in contention for the playoffs as they are 6th in the Eastern Conference. This program can build a lot off of Jalen Brunson, and with the next trade deadline coming up we may see the program build plays off his skill.

Brunson has brought some life to what seemed like a dying program. There’s no shocker that he is one of many Candidates for the most improved player of the year. He has been noticed by wsn.com, hoopshabit.com, and others in terms as a possible favorite for the Most Improved player award.

Jalen Brunson may be having one of the best seasons he’s had, however he does have some serious competition when it comes to the most improved award. One notable favorite has to be Shai Gilgeous-Alexander, another point guard in the league who is showing serious improvements from his previous seasons.

While the Oklahoma City Thunder may still be a struggling team, Alexander has helped OKC reach some wins that they may not have been able to achieve without his presence. For example, Alexander put up 38 points against the Dallas Mavericks in the 6th season of the game. In that game he also shot 55.6% from the floor, and put up a whopping 9 ast, and 6 rebounds, which as a point guard takes a lot of talent.

Tyrese Haliburton is in the running for the Most Improved Player this season because he has significantly raised his level of play for the Indiana Pacers. He is averaging a career-high 19.4 points, 11.0 assists, and nearly two steals per game. He is also shooting an impressive 50.9% from the field and 43.9% from three-point range. Haliburton has been one of the most efficient and productive players in the NBA this season and is a major reason why the Pacers are in the playoff hunt. He has been a major factor in the Pacers’ success this season, and his play has made him one of the top contenders for the Most Improved Player award.

Each season, the NBA awards the Most Improved Player award to the player who has taken their game to the next level. This year, the Most Improved Player contenders include Anthony Edwards, Tyrese Haliburton, Jalen Brunson, Shai Gilgeous-Alexander, RJ Barrett, and Cade Cunningham. These players have made significant improvements to their game, and all of them have a legitimate chance of winning the award. The winner of the award will be determined by a vote of the media and will be announced at the end of the season. There are more candidates that could be discussed here as you can tell, which goes to show what an honor it is to be recognized for the Most Improved Player. If Brunson can continue his same numbers he’s put up in the last 10 games he may boost his chances of becoming the NBA most improved player. Alexander is most likely the favorite as his numbers are better than Brunsons, but Brunson will give him some competition.