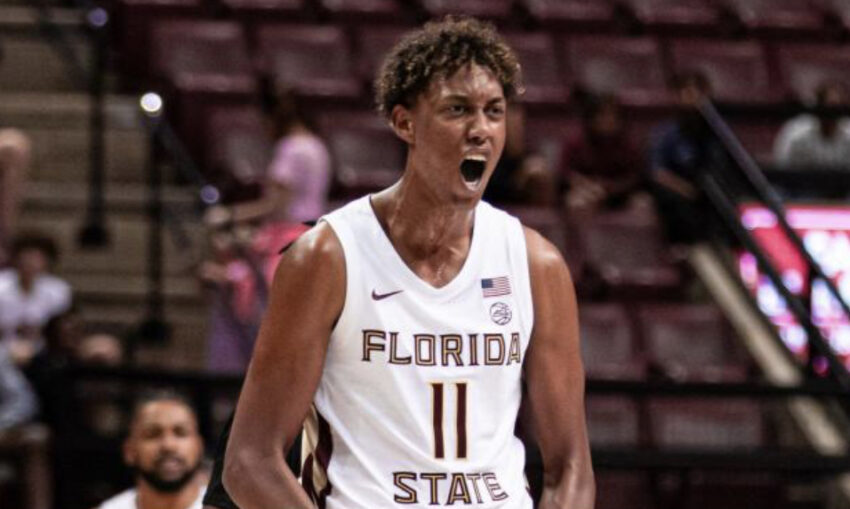 Florida State basketball is not off to the start they expected for this season. They currently are 5-13 overall, and 3-4 for the conference. They have lost every game away, and are 5-5 at home. They are on a two-game losing streak and face Notre Dame Tuesday evening on the road.

The Seminoles were hopeful for some newfound energy as their prized power forward, Baba Miller, was able to make his collegiate debut after missing 16 straight games due to an NCAA suspension. The Freshman played for 17 minutes against Wake Forest and picked up 4 rebounds and 4 points. While this was not the electric entrance Miller and company expected, the team is hoping the rust will detach and the lineup will fall into sync with Miller’s gameplay in the near future.

However, they might have to exercise a bit more patience, as Baba Miller had to miss Saturday’s game against No. 13 Virginia due to tonsilitis. Not a direct result, but the Seminoles did suffer their first home league loss. Florida State will need to adjust their play whether or not they have Miller on the court with them. Even if he has the shots and the skill, Miller lacks competitive experience which is crucial during this stage of the season.

Once Miller is healthy, head coach Leonard Hamilton will have to find a way to utilize him and make sure his presence is felt on the court. Coach Hamilton discusses his use of a short rotation when he says, “I’m starting to get really concerned about our guys psychologically. They seem to be pacing themselves to try and get through the heavy minutes that they’ve been challenged to play. I don’t think in my whole coaching career, I’ve never had a stats sheet where guys play 30, 40, 38, and 37 minutes and two guys played 32. I can’t imagine our players going into a game knowing you’ve got to play 40 minutes.”

So why are the Seminoles in this rut in the first place? Maybe their season would have had better outcomes at this point if Baba Miller was able to play during the first 16 games of the season.

Even experienced athletes need time to adjust to fast and aggressive collegiate play. No one is expecting the freshman to be the only answer to how Florida State expects to turn its season around. However, maybe if he had more time to adjust, and did not miss 50% of the season, then maybe their sequences would be more in sync and they could work to improve rather than play catch up.

In case you need a refresher, the Florida State Seminoles recruited Baba Miller from Spain and the 6-11 big had played in Real Madrid’s system for years. Head coach Hamilton had his eyes on the prize when he convinced Miller to join FSU over Gonzaga. While the Bulldogs have an extensive history of winning with talented international players, Miller wanted to play and knew he would have an immediate impact on a program like FSU to prepare for the NBA.

Unfortunately, Baba Miller and FSU were hit with some bad news just before the regular season started. It was announced that the freshman unknowingly committed an NCAA violation years ago. When looking to progress his development, Miller accepted an offer to come and participate in a basketball camp held in the United States.

To get to the U.S. Miller of course had to take transportation, which was offered to him for free. After learning that this free ride was not allowed, Baba Miller paid the two grand back in full. This still led to him fighting a double-ended sword, as the NCAA ruled Miller to miss out on 50% of Florida State’s season.

Baba Miller was only trying to better himself as a basketball player but ended up hurting his career in the process as a result of not knowing every single rule in a very concentrated and foreign rulebook. Was this a fair punishment for the freshman star? Most likely not, but rules are rules and it definitely has affected the Seminoles’ season to some degree thus far.

The freshman is a competitive athlete who is hungry to show his skills on the court. BM has great guard ability, with a consistent three-point shot. Miller creates opportunities for his teammates, and his study and big frame make him hard to defend. He runs fast after the ball, picks up boards comfortably, and is able to have an open vision of the court. Once he is healthy and has a few more games under his belt, there is no doubt that he will be a shining star for a somewhat dim FSU team.