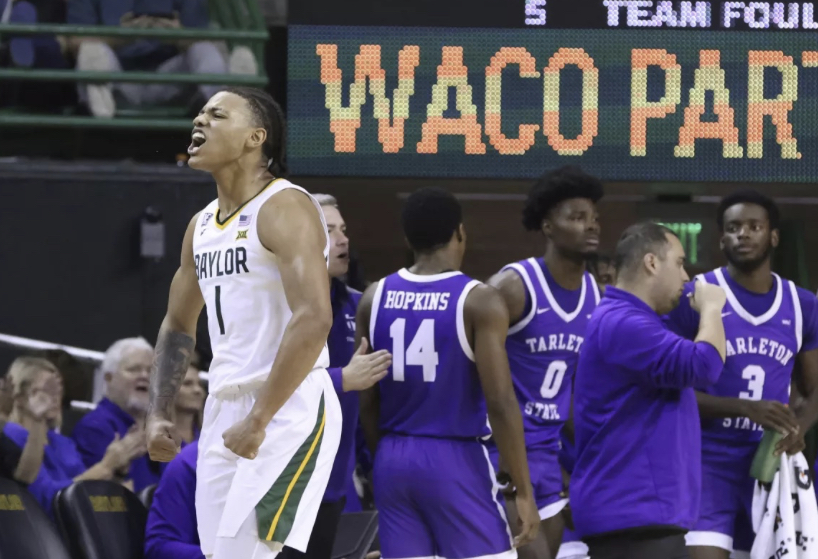 Baylor’s 19-year-old,  6’4”, and 185 lbs freshman shooting guard, Keyonte Darnell George is currently coming off a dominant game in which he flexed his wide variety of skills to help No.12 ranked Baylor knock off Tarleton in an 80-57 defeat.

This top recruit was born in Lewisville Texas and transferred during high school to attend IMG Academy in Bradenton, Florida during his Senior year. In 2021 he was named MVP after averaging 8.2 points per game and leading the U.S. to a Gold medal in Hungary with the (3x) 2021, 18-under World Cup Team.

While attending IMG Academy, he assisted his team in making the GEICO semi-finals during the 2021-2022 season. George was also ranked number six in the ESPN 100 for his graduating class of 2022.

In August 2021, George committed to playing under the guidance and leadership of Coach Scott Drew and the Baylor Bears of the Big 12 Conference in Texas. George also became a McDonald’s All-American player in 2022.

Prior to the start of the season, George received an honorable preseason Big 12 Freshman of the Year.  The preseason accolades rose George to prominence and paved the way for him as he looked to make new contributions quickly.

Although George is one of those players that can play and score at all levels, as a freshman, his shooting contributions to the team is currently averaging a total of 15.9 points a game while averaging almost 40% shooting from the field as he is aiming around 39.6%.

As an all-around player he averages 4.6 rebounds in 5.1 assists per game, is shooting 33.3% from three point range and 87% on the year from the free throw line.

During their December 6 win against Tarleton, George scored a combined total of 22 points, seven rebounds, and six assists. George showed great  athleticism on the defensive end of the floor as he stole the ball twice and pony up a block for the Bears.

George has had a pretty consistent season thus far as a collegiate basketball player. He may not be putting up crazy numbers on the court, but his diverse skill set has allowed him to help his team be a dominant force this season, as they moved up the ranks within the top 15 currently.

Currently ranked at No. 12 nationally, Baylor has a lengthy time off  before their next game on December 18 against Washington State. This time off will serve as time to recover for both George and his team as they look to shine on the national stage in mid December as part of the Pac-12 Coast-to-Coast challenge.

The Coast-to-Coast challenge will set the stage to allow George’s draft stock to go up. Currently he is projected to be a lottery draft pick in various mock drafts for the 2023 NBA Draft. He has the potential to rack up the number 10 overall pick.

Only time will tell for this Baylor Bear what spot he will land, but for now stay tuned on December 18!