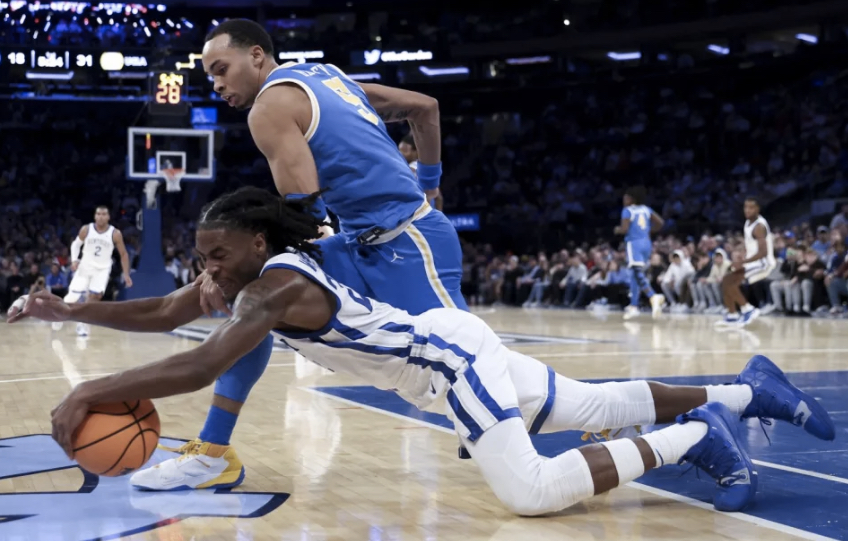 A potential late lottery pick, Cason Wallace is coming off a tough game versus UCLA.

Cason Wallace, a native from Texas, ranked 20th on the ESPN 100 right out of high school in the 2022 graduating class is a one of a kind athletic defender. This six-foot-four guard garnered attention from Universities such as Tennessee and Texas but finally decided to play under Coach Calipari for the University of Kentucky.

Wallace is one of the most well-rounded players at Kentucky. With near-perfect efficiency he makes it challenging to pinpoint any obvious shortcomings in his play. He may not always be accurate  but has made a huge impact for the Wildcats.

Currently, he is considered as the fourth leading scorer on his team as his stats averages 10.3 points per game. His shooting averages stand at around 46.9 % from the floor, while his  averaging 4.1 rebounds and  3.9 assists per game this season.

Wallace is now among one of the best combo-guards in his class. His athleticism, his scoring abilities, his defensive potential along with his stats has earned him a probable spot in the lottery draft.

Wallace is also being considered as one of the top players in the country.  He is a versatile guard who excels both on and away from the ball offensively. He has a decent range and can shoot the ball successfully from distance. Although his jumper is swift, smooth, and reliable, there is still room for him to continue developing as a distance scorer.

That being said, Wallace and the Wildcats are coming off a difficult game versus UCLA. He shot 15.4 % from the field and 66.7 % from the free throw line. In addition to those stats, Wallace scooped up a total of  an average of 14.3% of his three-point shots.

With those shooting numbers seeming less than impressive, it is pretty evident Wallace had a tough scoring game as he was only able to muster 7 points this time around. He also tallied three rebounds with no assists during this game. Although he had two steals during his defensive half, it wasn’t enough to keep the optimism a float.

Currently their record stands at 7-3 after this loss and they are currently tied for ninth place in the SEC.

Wallace, Calipari and the Wildcats have a few days off before their next game on the 21st against Florida A&M. Giving them several opportunities to improve their stats when they also host Kansas during the Sec-Big 12 Challenge on January 17th and the Texas A&M Aggies on January 21st.

During this time, Wallace ultimately expected to be the best 3-and-D guard and a crucial complementary player entering the draft this season. His unique defensive playmaking abilities won’t necessarily be the most eye-catching but his uniqueness to use his court vision and  create open shots will contribute to his team’s success thus making him a valuable pick.

Being one of the most fierce competitors in his draft class, his determination to succeed at all costs will land him as a lottery pick.