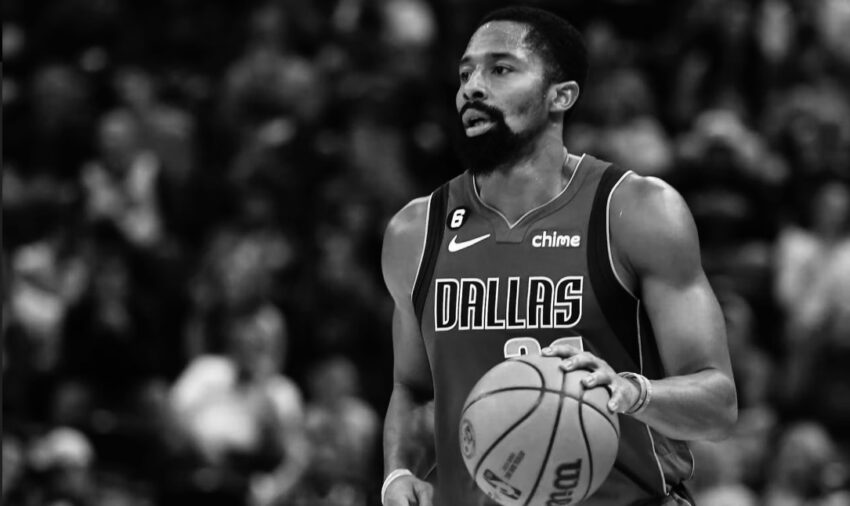 Spencer Dinwiddie has been on 4 teams in his 8 years as an NBA star. He was picked up by the Pistons in 2014 as a 2nd round pick, going 38th overall in the draft. The 29 year old played with the Pistons for 2 years, then spent some time with the D-League, and then was signed to the Brooklyn Nets and played with them for 5 years before his involvement with a sign-and-trade deal across 5 teams that sent him to the Wizards. He spent one season with the Wizards before being traded to his current team, The Mavericks, alongside Davis Bertans in exchange for Kristaps Porzingis.

Being with the Mavericks has been a successful switch for Dinwiddie. His game has evolved and he has adapted to the change of team quite well. Being alongside Luka Doncic has allowed Spencer Dinwiddie to capitalize his role as a shooting guard.
Dinwiddie is doing better with the Mavericks than he has done with any other team. With the Wizards Dinwiddie was a mediocre scorer. He put up a 37.6 FG%, 31 3Pt%, and a 44.7 eFG%. In Just 2 seasons with the Mavericks Dinwiddie has made a jump in his shooting. In his time with the mavericks he has a 47.7 FG%, 41 3pt%, and a 57.4 eFG%. He may not be Kristaps Porzingis, but he has filled the role of being the shooter– something the Mavericks need when Luka isn’t in the game.

Dinwiddie has improved in his time with the Mavericks, but he has fallen under the curse that many Dallas players fall under.
The curse: Inconsistency
Dinwiddie has had some explosive games this season including his 27 point performance against the Bulls where he had a 60 FG% and went fifty percent from beyond the arc. While Dinwiddie does put up some games where he contributes about 20% of the team’s points, he doesn’t do it on a consistent basis. As a starting shooter who earns a lot of minutes, he should have more than 15 points every game.

Dinwiddie has had 9 games this season under 15 points. 4 out of those 9 games resulted in losses. In those 15 games he played more than 25 minutes. A player who is earning 18.9 million dollars should be able to score in the double digits every game. He has had 2 games where he only has 2 points and that is unacceptable for a player at that caliber.

Dinwiddie may not be on the starting lineup for much longer if he doesn’t start playing consistently. On November 29th the Mavericks signed Kemba Walker to the team. Walker had suffered an injury that has put him out since February 16th of last season.

Kemba Walker has more experience over Dinwiddie, and he has several accolades and Dinwiddie doesn’t have any. Kemba Walker is not only a 4x NBA all star, but he also made the 2018-2019 all NBA team. Kemba Walker has averaged more than 15 points per game in all but his rookie season. He can contribute a lot to this Mavericks offense, so it will be interesting to see what Jason Kidd does with his team.

The Spread for Walker’s career shooting as well as Dinwiddie’s shooting is very similar. Dinwiddie has had a 41.6% on Field Goals, whereas Walker only beats him by 2 tenths sitting at 41.8%. They also have the same eFG% sitting at 44.8%. There’s two categories where Kemba Walker beats Dinwiddie in shooting: Free Throws, and 3 point percentage.

Both of these are the reason for some of the Mavericks losses. In the 1 point loss to the Bucks, the Mavericks went 10-24 on free throws or 41.7%. Dinwiddie went 75% from the free throw line, however if he would have just made one more the Mavericks would have been in this game. Dinwiddie is a player the Mavericks expect to contribute at least 15 points, however his average this season is only 16.4 points and overall in his career he is only averaging 13.3 points.

Another loss that was close for the Mavericks was the loss to Denver on November 20th, and Dinwiddie in this game failed to fill his role from beyond the arc. He went 1-8 from the 3 point line and the Mavericks had only lost by 1 point. One thing about Dinwiddie is that when he is on he is on, but when he is off…. well the whole team suffers.

This season is going to be interesting for the Mavericks as there will most likely be a shift in their starting lineups. As the season progresses Kidd will more than likely put Walker in as a starter alongside Doncic, Hardaway Jr., Finney-Smith, and we may see Christian Wood enter as a starter as well.
There still is hope for Dinwiddie, but I think his role will switch to coming off the bench for either Walker or Doncic when they need some rest. Dinwiddie is nowhere near a terrible player because he does have games where he contributes a lot, but his inconsistency and low scoring games is what’s going to get him moved to the bench.