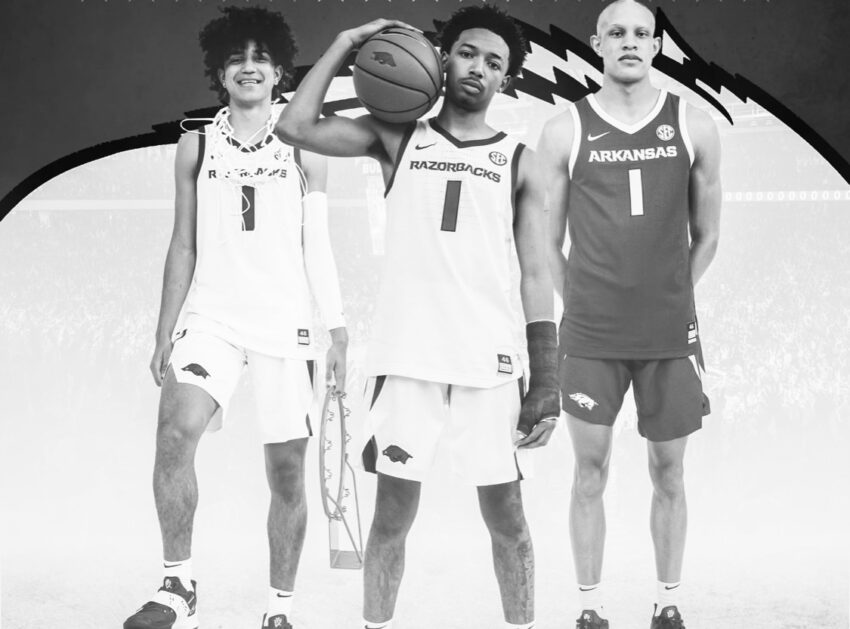 FAYETTEVILLE Ark.- The Chicago Bulls had Micheal Jordan, Scottie Pippen and Dennis Rodman. The Spurs featured Tony Parker, Tim Duncan and Manu Ginobli. The most notable of all big threes from the Generation Z community is Lebron James, Chris Bosh and Dwayne Wade with the Miami Heat.

These great assemblies of top names and premier talents have combined for more NBA awards, trophies, and titles than any single star centrally built roster. But, have we ever seen a big three at the collegiate level?

The better question might be do those big threes ever work out?

The most notable of the big three combinations at the collegiate level was UConn’s combination of Ryan Boatright, Shabazz Napier and DeAndre Daniels. The group, which many believe is the best backcourt ever assembled in college basketball between Boatright and Napier, won the NCAA National Championship in 2014. Although Boatright and Daniels never made a name for themselves at the next level, the group solidified themselves as arguably the most famous, and successful trio in college basketball.

However, there’s a new big three this season on the NCAA landscape from a place many wouldn’t expect.

Fayetteville, Arkansas isn’t the first program you turn to when thinking about historic college basketball programs. The Razorbacks have won one national championship all-time although making the tournament almost every other season. But, there’s a new basketball infusion into the small southern college town. His name… Eric Musselman.

He’s most commonly referred to as Coach Muss, but the high energy Musselman has seen his fair share of coaching miles. He’s had short head coaching stints in the NBA with Sacramento and Golden State, and most recently led Nevada to success before landing a job with Arkansas. In his first season with the Razorbacks they finished 20-12 before the tournament was canceled due to COVID-19. After the 2019-2020 season, the Razorbacks are yet to missout on the Elite Eight.

Musselman’s greatest strength has been his talent acquisition. The outgoing players coach is no stranger to bringing in top recruits as the 2022 recruiting class was second best in the nation only behind Duke per 247 Sports. Their three five star recruits now make up college basketball’s newest big three.

Nick Smith Jr. is the Lebron James or Micheal Jordan of the Razorbacks big three. Graduating from Little Rock High School, not far from the University of Arkansas campus in Fayetteville, Smith Jr. became the No. 1 ranked 2022 recruit by 247 Sports after Emoni Bates reclassified. The star combo guard who has decent size at 6-feet-5 and an ungodly long wing span could be the next premiere new age guard in the NBAl.

Smith Jr. will be no stranger to the limelight as he enters the Razorbacks program as the highest rated recruit in the state of Arkansas and the highest rated Arkansas recruit ever. Yes it draws Lebron James in Cleveland comparisons for the playmaking guard but Smith Jr. is ready to play in the hometown limelights.

Smith Jr. wasn’t bumped into the top prospect position until a breakout string of tournament play in the spring of 2021. He finished the Jordan Brand Classic All-Star game with a game high 27 points including a 5 for 7 line from three. In the McDonald’s All-American Game and Nike Hoops Summit, Smith was noted by many pro scouts for his shot creating ability and play off the pick and roll.

Early projections for Smith Jr. ‘s rookie campaign predicted a one and done lottery pick. He’s also popped up on award watches for SEC Player of the Year and SEC Freshman of the Year.

Call him a freak of nature, Anthony Black would shrug it off and concede to your bizarre assertion of his talent. The 6-foot-7 point guard is anything but normal and increasingly crucial in the ever changing landscape of the point guard position. His eloquent confidence handling the ball and running the offense at the point is one of the true basketball marvels of our time.

Don’t let that take away from his on court production. Black is the complete package when it comes to basketball players in the sense he can do it all. With a bigger frame he can drive to the rim, rebound, and defend. With an extraordinary basketball IQ, Black can pass and set up high percentage looks for his teammates and himself.

The Duncanville, Texas native was a reach for Arkansas throughout the recruiting process in 2022. College basketball juggerknots, most notably Gonzaga, came knocking on Black’s door, but in the end it was Coach Muss who exited the summer as the victor.

Musselman later commented that it was easy to recruit Black as his family was welcoming and happy to accept the Arkansas coach into their home. This close bond between Musselman and the Black family solidified not only Black’s intent to play for the Razorbacks, but Musselman’s recruitment savvy.

However, it never stopped with Dwayne Wade, Scottie Pipern, or my collegiate example of Nick Boatright, a big man is always needed to play with the guards.

The last piece of the puzzle is Jordan Walsh. A five star stretch four that will likely find a place on the wing, Walsh has little to no holes in his game. The largest threat to Walsh’s playing time this season is his three-point shooting. While an excellent free-throw shooter which bodes well for developing range, Walsh has struggled consistently from the arch.

It’s not only Walsh that struggles from deep. Outside of Smith Jr.’s ability from range, the entire Razorback squad has had their fair share of woes from deep. Last season the Razorbacks finished the regular season just above 30% behind the arc which ranked No. 328.

Defensive prowise was able to carry the team to their second straight elite eight appearance, but if the Razorbacks plan to make a run to the Final Four this season, they need to be more consistent from deep.

The 2022-2023 season has started off on a high note for the Razorbacks. They’ve beaten both their opponents by 15-plus points, and have shown they’re ever more driven on defense, not allowing a team over 60 points in one game.

Still the three point shot lacks consistency as Arkansas shot just 12.5% (2/16) from three in their win against Fordham.

For Smith Jr., he’s been sidelined with a back injury and is yet to see the court in his freshman season.

Anthony Black and Jordan Walsh both struggled in their first game at the collegiate level combining for a mere seven points in 48 combined minutes but recovered against Fordham to put in solid showings. Under Musselmen, and with the addition of Smith Jr., the trio will only continue to improve as the No. 10 ranked Razorbacks will be a team to beat in the highly contested SEC.