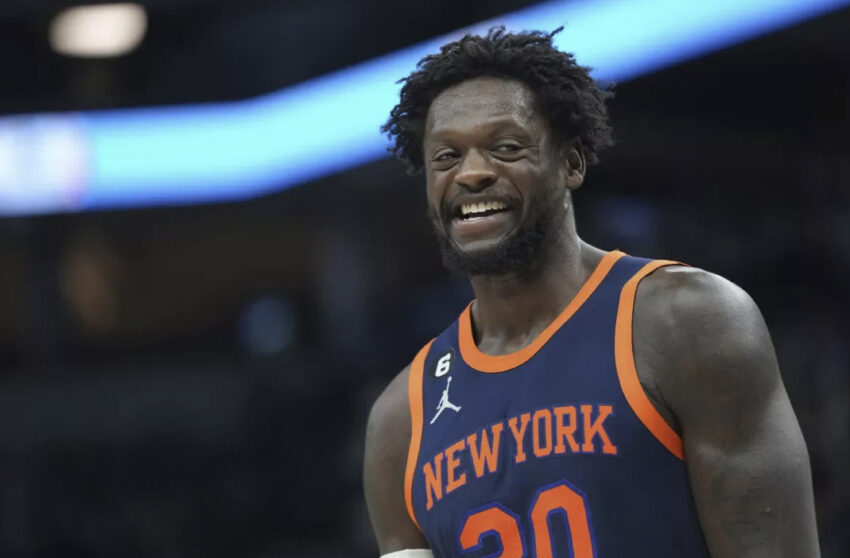 It’s the fourth season as a Knick for the nine-year veteran Julius Randle and fans wait to witness a year of redemptionfrom him. Prior to the 2021-22 season, Randle had a break-out year to push the Knicks into the playoffs (first appearance since 2013), finishing as the fifth seed in the eastern conference. Twelve games into this season, Randle is averaging 20.1 points, 8.9 rebounds, and 3.3 assists. Not off to a terrible start, but there are areas of improvement that’ll need to occur for Randle to bring the Knicks into the playoffs after coming up short last season.

​Playing in New York can endure a lot of pressure for players that are put in the spotlight, such as Randle.

Underperformances on a nightly basis can cause an uproar in the fanbase, and in a city like New York, fans will make sure their voices are heard. Last season for Randle was a year he’d rather put behind him––battling shooting struggles on all three levels on the floor, dropping in percentages and points. Due to the decline in his performance, fans chanted boos at Madison Square Garden as their way of expressing their displeasuretowards him. Randle has spoken out about hearing the boos of the fans and how he acknowledges that it’s a part of playing in New York.

The Knicks’ franchise views Randle as their leader, the player that will help them reach the next level to contend in the eastern conference. But there are times the lack of consistency brings doubt. Randle shows glimpses that he can still play the way he did back in 2020, then goes back to poor shot selections, turnovers, and bad body language. Last season, Randle showed a lot of bad body language where you’d question his effort in wanting to win. In his breakout year, Randle displayed constant hustle––fully engaged in every play on both ends of the floor. Fans are still unsure about Randle this season, but there’s still a chance he can regain their trust.

For the past three seasons, Randle had to carry the load of playmaking while also being the main contributor toscoring and rebounding. Now, since the Knicks signed point guard Jalen Brunson in the offseason, Brunson has taken that weight off him, making more of his focus around scoring. Randle has the ability of getting his teammates involved, but everything revolved around him, if he wasnot producing, nobody else was either. With Brunson in the lineup and being the new primary ball handler, this draws some attention off Randle, allowing him to move better off the ball and getting better looks. This should be a relief for Randle since Brunson is a dual threat in scoring and playmaking.

This year is going to be a big season for the 6’8 forward, as many have written him off as the guy to lead New York. In the twelve games the Knicks have played, Randle is averaging 20.5 points, 9.0 rebounds, and 3.4 assists, still identical numbers to last season––just more efficient. Knocking down the easier looks below the three-point line has increased his two-point percentage,compared to the previous season, from 45% percent to 54%. In the last four games, Randle has had the hot handfor the Knicks, putting up 26.3 points, 9.0 rebounds, and 3.3 assists, while finding his touch in 3-point range, shooting at a high clip of 42%. Only good things wait for New York if Randle can continue this high level of play on a more consistent basis.

Preparation before games is a vital part of an athlete’sperformance, and for Randle, that has been meditation. 30-45 minutes before a game, Randle takes that time to put his mind at ease. He says every game it’s a different message and that he wants to have fun with the game ashe did when he was a kid. Unlike what was stated earlier, this season, his energy levels have risen to more what we are used to seeing, getting back to hustling––even showing an occasional smile. Displaying good energy and hustle on the floor for Randle can lead to a contagious effect for the team to come out with more energy.

Starting with an overall record of 6-6, there’s more optimism than disappointment in New York. Currently,there are six teams in the top ten seeds who have at least six losses, so it’s safe to say that the east is more forgivingwhen teams lose. The Knicks don’t have the most competitive roster and they must work a little harder on both ends to make up for where they lack, which is the offensive talent and not having primary defenders. Winning games for the Knicks will have to stem from collectiveness and cohesion instead of going 1-on-1 in the half-court set.

If the Knicks organization want longevity with success, it’s going to take more than two players. What they are missing is a true franchise-caliber type of player on top of the current talent. Randle needs more than Brunson and a slow developing R.J. Barrett to become contenders. The co-leadership of both Brunson and Randle is a step in the right direction, but they are a player or two short of grabbing the league’s attention. There are moments in games where it seems like only Randle and Brunson have the capabilities to scoring the basketball. Additions to the roster for more firepower is something the organization should be consideration.​

​For a Thibodeau-coached team, where he is known to have a reputation for teaching defense, the Knicks have nothing to show for it. During that stellar 2020 season for the Knicks, they finished the season tied with the Lakers for the No.1 spot in defense, allowing 104 points. Althoughthe following season was disappointing, they averaged106 in allowed points and ranked sixth in defense. Falling way behind this season, they are currently ranked 20th in the league in allowed points, giving 120 points per game. Not many wins will come to any team that allows a high volume of points; coach Thibodeau is still in search to solidify a rotation that will offer the most on the defensive end.

Projections for the Knicks this season sits at the tenth seed in the eastern conference, making them qualify to play in the play-in tournament. The eastern conference has too many competitive teams that will win more games from seeds one through eight, making it too difficult for New York to secure a playoff spot. Making it into the playoffs from the play-in seems unlikely as well since this team does not execute down the stretch and allows teams back in games. This Knicks roster is filled with youngplayers who lack experience, and it was shown in a 4-1 first-round exit against Atlanta in the 2021 playoffs. Aplayoff-environment Madison Square Garden atmosphere was an experience the players were not prepared for, this Organization still has work to do before they can envision a playoff run.