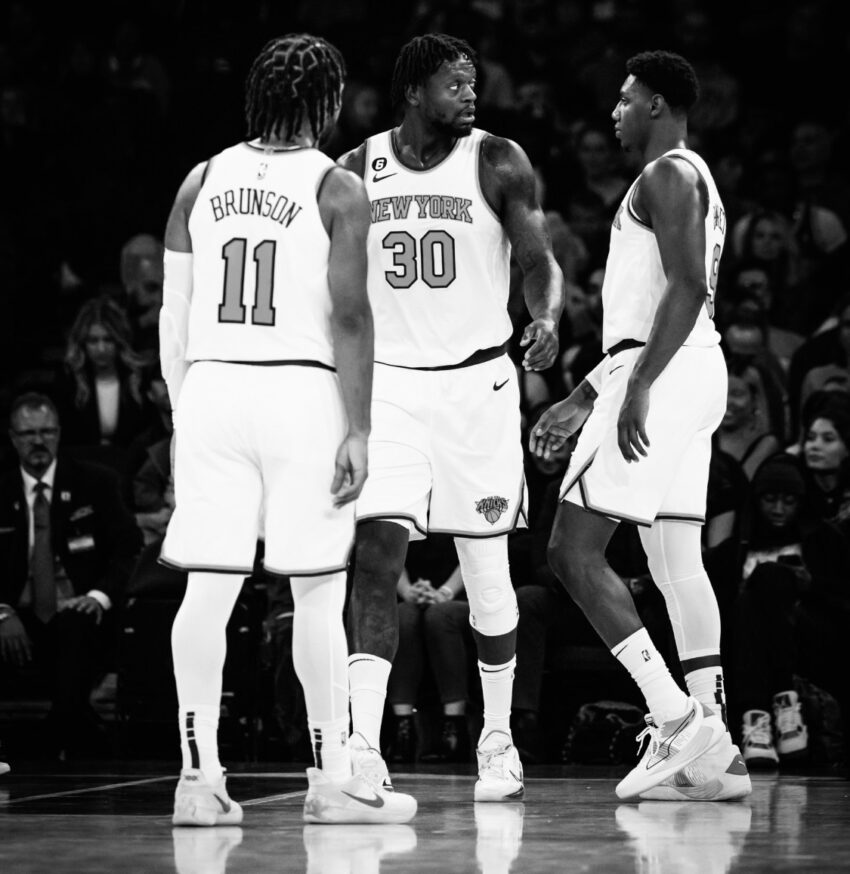 It’s safe to say that the New York Knicks have emerged from the dark days of the mid to late 2010s. However, after a promising 2020-2021 season, the Knicks took a step back last year, failing to even make the play-in tournament. The offseason allowed the Knicks to revamp their team a bit, losing some veterans like Alec Burks and Nerlens Noel, but adding a talented point guard in Jalen Brunson. While the Knicks have put themselves in position to fight for a playoff spot this year, it’s clear that they aren’t a championship contender just yet. Here are 5 ways the Knicks can become true contenders in the playoffs.

This is the obvious and at the moment, most important step for the Knicks to take. RJ Barrett is developing into the face of the franchise for years to come. The 22 year old averaged 20 points, 5.8 rebounds and 3 assists last season in a year which saw some personal growth for the young wing. The young duo off the bench which consists of Immanuel Quickley and Obi Toppin saw their roles grow last season, which has continued so far early into this year. Quickley is the first guard option off the bench for coach Tom Thibodeau, while Obi Toppin brings unmatched energy and pace to the game. Mitchell Robinson is a premier shot-blocking rebounder at the center spot, but his problems with fouls have limited him a bit thus far in his career. Cam Reddish is a sneaky acquisition for the Knicks as well. If these four or five young guns for the Knicks can continue to grow in their roles a bright future should await.

The Knicks are one of the most valued franchises in all of sports. While that should draw attraction for players around the league, it has failed recently. Since the Knicks have had some success in the past couple of years, creating some cap space for the future should be important. Trading a player like Evan Fournier, who is under contract through 2024-2025, or even the aging Derrick Rose would clear space in the payroll for the Knicks to sign that big star.

Patience is key for the Knicks in many ways. Let the young guys develop, but also don’t rush into a bad trade or signing. The 2023 NBA free agency pool isn’t exactly a strong one, but 2024 is much more promising, being headlined by Celtics star Jaylen Brown, and Raptors star Pascal Siakam. Two proven stars who have made their way deep in the playoffs could help boost this Knicks team into contenders… if they just wait for the right time to sign them.

4. Match the style of the modern day NBA

The Knicks made the playoffs in 2021 thanks to their superb defense. However when it came down to it in the playoffs, they struggled mightily to score, and their defense didn’t match that of the regular season. This season, the Knicks currently lead the league in field goal attempts per game at 96. Fast pace play means a run and gun style of offense, which has helped the Knicks immensely thus far in the season. Strong defense and a high volume of shots is the recipe for success in the NBA, and the Knicks will look to continue with that trend.

The leader of this Knicks team is 2021 all star Julius Randle. Randle certainly can put the ball in the basket, but sometimes his shot selection can hurt the Knicks. If Randle has an off night shooting the basketball, he takes away shots from players like Jalen Brunson and RJ Barrett who could provide the Knicks with an offensive spark. Regardless, Randle is a phenomenal rebounder and a threat on the offensive end of the floor no matter what. He should have some trade value as soon as this trade deadline, or more likely after this season. The Knicks could unload him for some future picks, or a few more pieces to help contribute to a win now mentality.

The New York Knicks are a team at a bit of a crossroads at the moment, but that may not be a problem. This season is still so young, and the Knicks have proven themselves to be quite competitive so far. Making the playoffs is a must this season in terms of development, but a championship is at least a few years away in terms of a realistic goal. Keeping the young core in tact, while adding in an effective offseason in 2024 could put the Knicks in a serious position to contend for a championship in three or four years.