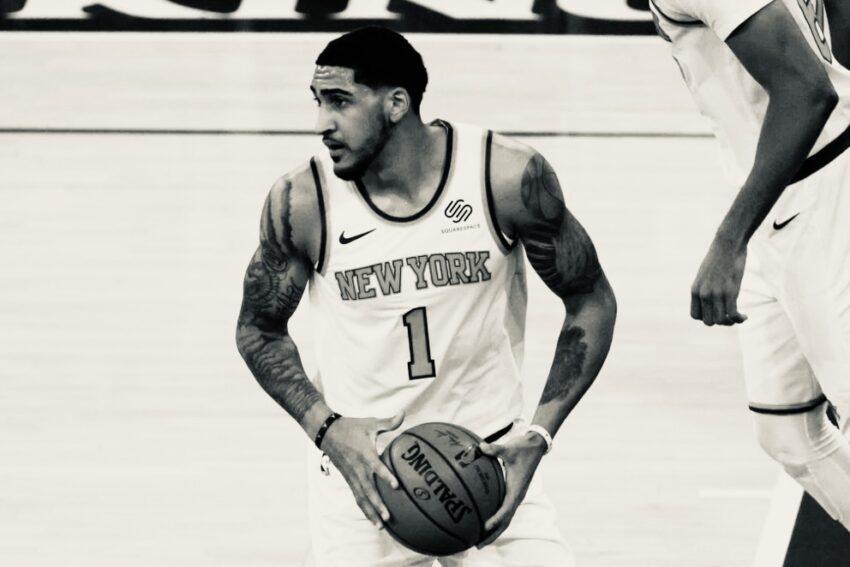 It’s been three years since the New York Knicks drafted the 2020 National College Player of the Year in Obi Toppin. Selected 8th overall in the 2020 NBA draft, Toppin has drawn a lot of praise and criticism so far in his young career. The 6 ‘8 forward has explosive athleticism, which allows him to compete in today’s fast pace, run and gun NBA game. However, his defensive capabilities have been faulty while his shooting has been a bit streaky as well. Let’s take a deeper dive into the career and future of Obi Toppin with the Knicks.

​Toppin’s rookie year was tampered with due to the surprising success of the Knicks in the 2020-2021 season. Oftentimes if a team is successful, they are led by their stars, (Julius Randle) and key role players (RJ Barrett, Derrick Rose, Alec Burks). Because of this success, Toppin’s minutes were a bit limited. During his rookie season Toppin only averaged eleven minutes per game, shooting the ball just over three times per game as well. While Toppin flashed signs of potential, and weakness in his limited minutes, this sample size simply wasn’t big enough to draw any sort of true conclusion as to how he would fit into this Knicks squad.

​Toppin’s second year in the league saw less team success for the Knicks, which meant more time for him and other younger players to show what they can do. Obi’s minutes went up from eleven per game to seventeen per game from his rookie to sophomore season. His points per game number jumped from four to nine points per game as well. Toppin was really given his moment to shine toward the end of the season, once the Knicks were eliminated from playoff contention. In their last five games, the Knicks had a 3-2 record. Obi Toppin led the way scoring for the Knicks in two of those wins with a 35, 42 point performance during that run. Toppin flashed some scoring potential, but questions still remain with his defense.

​Entering his third season this year, Toppin’s role within the team has remained the same. He still plays seventeen minutes per game, and is averaging one more point per game this season than he did last year. A large part of why Toppin can’t crack the starting lineup, or even play over twenty minutes a night is because of his defense. He’s a bit of an in between player. A forward who plays a bit like a big man and a bit like a wing can be a versatile weapon for any team, if they have the right skillset as well. On offense Toppin can score through lobs toward the rim and offensive rebounds. His shooting comes and goes, but it’s clear that Toppin’s main offensive weapon isn’t his perimeter shooting. Defensively, Obi struggles to guard small, quick guards, but also is undersized trying to guard big men in the paint. Some sort of work or adjustment needs to be made on his end if he wants more playing time.

​Toppin’s future with the Knicks seems certain for at least another season. After the rumored Donovan Mitchell trade fell through, Toppin’s name stopped swirling around on the trading block. He’s under contract with the Knicks through 2024, meaning he has almost two full seasons to continue to prove himself in the NBA. If the Knicks are successful this year, Toppin’s minutes may again be limited, causing him to perhaps consider looking to another team for a contract in the future.

​However, Toppin is a hometown kid, playing in his native state of New York seems to fit him well. If the team is successful it also may sway Toppin to stay right at home while his team is playing well. If the team performs poorly, Obi should see the floor more like he did at the end of last season, which is exactly what he needs to continue to show his worth. His ceiling? Probably a reliable starter who will serve his role on a team. Unfortunately I think it’s safe to say Toppin isn’t blossoming into a star in this league, and considering he turns 25 in March, saying he’s “still young” is a bit of a stretch in today’s NBA.

Toppin’s floor? It could be as bad as a benchwarmer, or perhaps even out of the league in 5-10 years if his athleticism decays or if he gets injured. It’s safe to say Toppin will sign another contract once next season is over, however it is a question if that contract will be with the New York Knicks, or with another team. Optimistically speaking, expect Obi Toppin to stick around in New York, with a chance to break into the starting lineup, or at least become a crucial role player for a contending Knicks team for years to come.