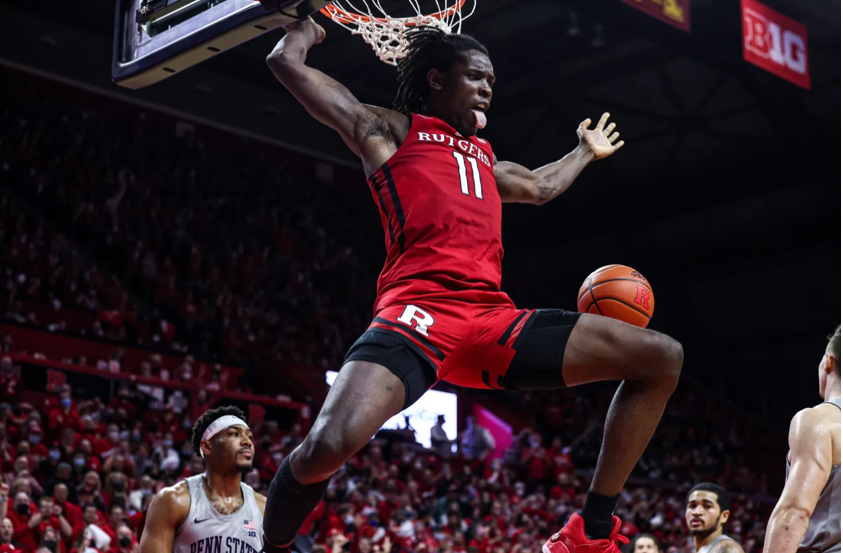 November is here, so this is your friendly reminder to get a head start on all of your yard work, as there won’t be as much time after the college basketball season commences early next week. If you are from New Jersey, those leaves are ready to go and so are the Rutgers Scarlet Knights.

The last few seasons of Rutgers basketball have been incredible to watch. If you have been able to attend a game at Jersey Mike’s Arena, formerly known as The RAC, you can attest to the electric energy emulating from all around the court. The Scarlet Knights are back this season, and they are hungrier than ever for greatness. After 3 consecutive years (Yes, I am counting the covid year) of qualifying for the NCAA tournament, this might be Rutgers basketball’s most important year yet to solidify their ongoing appearance at the big dance. One Scarlet Knight in particular is ready to seize the court and solodify his reign as our Nation’s dunk legend: Clifford Omoruyi.

Year 3 is underway for star center Cliff Omoruyi as he is expected to be the focal point of Rutgers offense this season. “Big Cliff” is no stranger to Big Ten play and he will be a strong force for the Scarlet Knights this season. After starting in all 32 games during his sophomore year in 2021-22, Omoruyi enters this season with more confidence and experience than ever before. He is one of the biggest guys in the league, and he is hungry to be the best.

This season, Rutgers basketball had some big shoes to fill as two of its team’s biggest scorers, Ron Harper Jr. and Geo Baker, will no longer be on the court in Piscataway. The Scarlet Knights are confident that Cliff Omoruyi, along with his teammates, will be able to take care of business.   “Players always say that they want a bigger role,” Rutgers’ head coach Steve Pikiell says. “For Cliff, here it is. I wish we could have guys like Ron (Harper Jr.) and Geo (Baker) stay forever, but that’s not the way things work. When people leave, it opens up opportunities for others. That’s what Cliff has this year.” Cliff was just announced as Rutgers team captain, along with Paul Mulcahey and Caleb McConnell.

An international student from Nigeria who attended Roselle Catholic High School, Cliff Omoruyi is no stranger to hard work and dedication. The 6-11 competitor has proven his talent throughout his last 2 seasons with the Scarlet Knights. Cliff has a strong impact within the Rutgers University and New Jersey community both on and off the court. While he is praised for his monster alleyoops, he can slso be seen volunteering at The Salvation Army Newark’s “Books and Basketball” program. This year it is his time to solidfy his legacy.

During his freshman year, Cliff played in 23 games with six starts, averaging 3.8 points and 3.9 rebounds. Last year, Omoruyi had his breakout campaign as starting center and improved his career highs in points (11.9) and rebounds (8.2). Cliff entered the NCAA Tournament last season leading the country in dunks and ended the season as a Big Ten Sportsmanship Honoree and an All-Big Ten Honorable Mention.

This year, Omoruyi is getting the recognition he deserves. Big Cliff was selected to the 2022-23 All-Big Ten Preseason Team and has also been chosen as a member of the watch list for the 2023 Kareem Abdul-Jabbar Award. This award is given to the best center in the country, truly an honor which Cliff could very well represent.

The Rutgers Scarlet Knights will enter this season with confidence knowing Cliff will be the starting center on the court for his 2nd consecutive year. If Big Cliff can improve and become more consistent in his three-pointer abiltiy, the big man will be dangerous to the point of unstoppable this season.

While Omoruyi oozes natural athleticism, he still pushes himself harder each and every day to be the best man on and off the court. During the off season, Cliff was relentless when it came to training and conditioning. While he continues to be a huge threat at the rim, his goal of the off season was to work on his defense, shoot more threes, and refine his outside and midrange game. If Cliff can find success in these areas, in addition to his skilled agility and athletic build, he will be a force to be reckoned with throughout the entiery of the season.

Last Sunday, Rutgers played Fairfield in charity exhibition game for Team Eric Legrand. Fans were welcomed back to Jersey Mikes and they were ecstatic to see the see how the team has developed in the off season. Paul Mulcahy, Cam Spencer, Mawot Mag, Aundre Hyatt, and Clifford Omoruyi were on the floor for tip-off, with the defensive star Caleb McConnell not suited up due to a healing knee injury. While not an official game in the Knights’ schedule, there still was a ton of buzz about how the team is looking.

Omoruyi definitely showed up and demonstrated his success from all of his hard work in the off season. Leading the team with 19 points, nine rebounds, and two blocked shots, Cliff dominated the court with long, fast strides and an explosive energy. Fairfield coach Jay Young says no one has a chance at defending Cliff when he is making threes. “He is the quickest guy I believe in the country from the floor to the rim. A lot of guys jump high, but it’s the explosion and velocity he gets off the floor with,” Young added. Cliff has worked hard in the off season to polish up his finishing ability and be the best center possible. Last year’s success at the rim will be fatal for other teams when he is also dropping buckets from step backs and three-pointers.

Fans of Rutgers basketball are filled with anticipation for the official season to begin on Monday, November 7, in Piscataway against Columbia. Jersey Mike’s Arena will once again be a huge threat to away teams as the program officially sold out of season tickets and broke the program record for the second consecutive year.

That being said, it is inevitable that the first Big Cliff dunk will cause a surge of pandemonium throughout the arena. This season will play a monumental role in Big Cliff’s future and will be a stepping stone for him becoming an NBA-caliber big man.