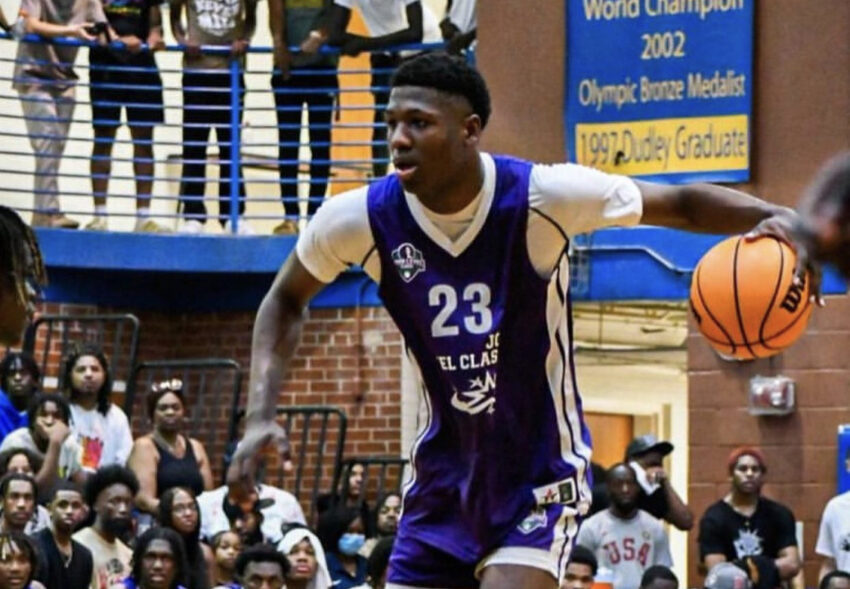 1) GG Jackson (2023) – 6’9”, 210 – Forward – Ridge View, SC – North Carolina – GG Jackson’s size and length make him a force as he is still filling in his body. GG is slowly expanding his offensive game and it’s coming along really well. GG has a high motor and is a heartbeat for any team he is on. GG Jackson has all the tools to be an NBA player. A year at UNC will get him ready for the league.

2) D.J. Wagner (2023) – 6’3”, 165 PG/SG – Camden, NJ – DJ is an elite scorer with an effortless ability to put the ball in the basket. He’s got a great feel for the game and an advanced skill-set on the offensive end. At 6-3, he’s undersized by NBA 2-guard standards but has enough playmaking ability to run some point and such a good feel for the game and for scoring the ball that he’ll fit into any offense. Shooters and scorers of his caliber come along only so often and he seems destined to be a big-time bucket-getter at the NBA level.

3) Koa Peat (2025) – 6’7”, 190 – SF/PF – Gilbert, AZ – Koa is a 6-8 powerhouse of a forward with a silky smooth game. He’s got an offensive package that is beyond his years and he looks almost pro-ready. He’s a big-bodied forward with wing skills, good length, and obvious natural talent. Expectations are sky-high for Koa. He looks like a natural on the court. He might not ever be a big-time run/jump athlete but with his size and talent, it won’t matter.

4) Ian Jackson (2024) – 6’5”, 180 – Forward – Cardinal Hayes High School, NY – Ian impacts the game on both sides of the basketball with his energy that compliments his overall game. His athletic ability allows him to be dominant in transition which opens other areas of his game and makes him a tough cover. Ian can score the basketball off the dribble as well as catch and shoot which makes him such a threat on the floor. Ian has the size and speed to be an NBA guard.

5) Robert Dillingham (2023) – 6’2”, 165 – Guard – Donda Academy, CA – Robert Dillingham is a guard that play makes well for his teammates. Robert’s speed and athleticism open up so many things on the floor when he drives in the paint. Robert has insane bounce and can finish at the rim at a high level. Robert’s quickness is different and will allow him to flourish in the NBA.

6) Mackenzie Mgbako (2023) – 6’8”, 200 – Forward – Gill St Bernard S School, NJ – Duke – Mackenzie Mgbako is a versatile prospect he can battle in the paint and play on the perimeter. Still developing a consistent three-point shot that will help him at the next level. Mackenzie is an intriguing prospect but will get the development he needs to make sure he’s an NBA prospect.

7) Kwame Evans Jr. (2023) – 6’9”, 200 – Forward – Montverde Academy, FL – Kwame Evans Jr. is a very good prospect with great size. Kwame has a long wingspan which helps him on the defensive end as well as on the offensive end when it comes to finishing around the rim.  Kwame has good size and will fit perfectly in today’s NBA.

8) Ron Holland (2023) – 6’8”, 195 – Forward – Duncanville, TX – Ron Holland brings a defensive presence in the paint as well as being a force on the offensive end. Ron can handle the ball on the perimeter and that mixed with his athleticism makes him a force on the wing. All the tools Ron possess make him an NBA prospect and on teams’ radars.

9) Isaiah Elohim (2024) – 6’4”, 185 – Forward – Sierra Canyon High School, CA – Isaiah Elohim is not a freak athlete but has good size, bounce, and all the physical tools. Isaiah can bully his way into the lane against the competition. Isaiah is a strong, compact, and aggressive shooting guard. Isaiah rises smoothly for his jumper and has a great touch and an overall great feel for scoring the ball.

10) Matas Buzelis (2023) – 6’9”, 175 – Forward – Brewster Academy, NH – Matas Buzelis has a versatile skill set at his size. Matas’s passing abilities stand out when you look at his game. His handles and IQ make him a good playmaker. Matas has the shot-making to potentially be an NBA player but will see how his development goes these next two years.

11) Tre Johnson (2024) 6’4”, 180 – Guard – Lake Highland High School, TX – Tre is a very good jump shooter off the catch or utilizing the rhythm dribble and he loves the mid-range game. Tre is a long and lean perimeter prospect who shows a sweet stroke. Tre is tremendously skilled and has a good feel for the game.

13) Trentyn Flowers (2024) – 6’6”, 175 – Forward, Sierra Canyon High School, CA – Trentyn Flowers has the size, length, and vast skill set to legitimately fit in anywhere on the court. Trentyn is an elite athlete, a feisty rebounder on both ends, guards multiple positions, and plays with an unrelenting motor. Trentyn is like a swiss army knife. Trentyn can knock down shots from the perimeter as well as take guys down to the post.

14) Justin Edwards (2023) – 6’7”, 180 – Forward – Imhotep Institute, PA – Justin Edwards has a tremendous length which helps him be an effective defender. Justin can play out of the post as well as stretch the floor to the perimeter.

15) JJ Taylor (2023) – 6’8”, 185 – Forward – Donda Academy, CA – JJ Taylor is a player that shines when driving to the hoop. He has an elite first step that allows him to get in the lane and show off his athleticism as he finishes around the rim. JJ can stretch the floor with his ability to shoot from the outside mixed with his handles of the basketball.