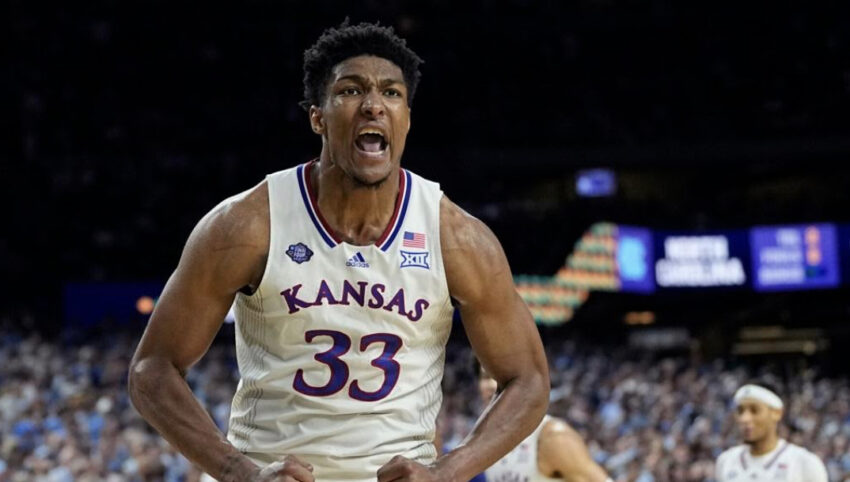 1. David McCormack (Kansas) – David McCormack is a beast in the paint and is a man amongst boys on the court. With David’s size and aggressiveness, he is an unstoppable force at times. In the Final Four, David and the Kansas Jayhawks defeated the Villanova Wildcats 81 to 65. In that victory, David put up 25 points, 9 rebounds, an assist, and a steal. David’s presence was felt in the paint on the offensive side finishing almost everything he put up while making a difference on the defensive side by making it tough on players to score in the paint. David followed that up with 15 points, 10 rebounds, a steal, and a block in the National Championship game. David got in foul trouble early but got back on track in the second half. David’s impact was felt once again in the paint and made a game-sealing shot in that area at the end of the game as the Jayhawks beat the North Carolina Tar Heels 72 to 69.

2. Ochai Agbaji (Kansas) – Ochai Agbaji is the best player on this Kansas Jayhawks team and displayed that throughout the tournament. In the Final Four, the Kansas Jayhawks faced the Villanova Wildcats. In this game, Ochai put up 21 points, 2 rebounds, an assist, and a block in an 81 to 65 victory. Ochai was lights out from three-point range hitting 6 out of 7 shots from long range. Ochai is an aggressive player that plays the game the right way. In the National Championship game, Ochai had a tough night against UNC but still managed to put up 12 points, 3 rebounds, an assist, a steal, and a block. Even though he didnt have a huge night numbers-wise his presence on the court is a factor for the Jayhawks. With Ochai’s performance, he was named Most Outstanding player after the National Championship game. Ochai is a future pro and will do well at the next level.

3. Armando Bacot (North Carolina) – Armando Bacot has been the best player on the North Carolina Tar Heels all season and some believed he should have been ACC player of the year. In the Final Four, he kept up the level of play he has been playing with all season. In a win over Duke, he put up 11 points, 21 rebounds, a steal, and a block. Armando is a rebounding machine and is the engine for the Tar Heels unfortunately in the Final Four he sprained his ankle pretty bad but they held off Duke 81 to 77. Going into the National Championship Armando was not 100% but he still gave it a go. Even with a badly sprained ankle, Armando put up 15 points, 15 rebounds, 2 assists, a steal, and a block. Armando gave it all he had until late in the second half when he sprained it again. No matter the result Armando and the Tar Heels should be proud of an amazing season under first-year head coach Hubert Davis.

4. Caleb Love (North Carolina)– Caleb Love is a future pro and a very good player for the North Carolina Tar Heels. Caleb has stepped up for the Tar Heels time after time making big-time shots. In the Final Four, Caleb had a game for the ages in a classic game against Duke in Coach K’s final season. Caleb put up 28 points, 4 rebounds, and an assist against duke in an 81 to 77 victory. Caleb put the nail in the coffin on the Blue Devils by hitting a late-game three-pointer over Mark Williams. Caleb is so versatile on the offensive end from his ability to finish at the rim as well as stretching the floor to hit big-time shots from three-point. In the National Championship game, Caleb cooled down and struggled from the field. In a loss to the Kansas Jayhawks Caleb only put up 13 points, 3 rebounds, 2 assists, and a block. It was a devastating loss for the Tar Heels after such a great run in the tournament. This was a wonderful season for the Tar Heels under Coach Hubert Davis in his first season.

5. Christian Braun (Kansas) – Christian Braun is a key piece to the Kansas Jayhawks and they know that very well. When Christian steps on the court he is an X-factor because he impacts the game in so many ways. In the Final Four against Villanova Christian Braun put up 10 points, 3 rebounds, 5 assists, a steal, and a block. His impact was felt in the second half when he hit two key three-pointers that were crucial at that part of the game to keep the momentum for the Jayhawks as they defeated the Villanova Wildcats 81 to 65. The X-factor showed up again in the National Championship as the Kansas Jayhawks beat the North Carolina Tarheels 72 to 69. Christian put up 12 points, 12 rebounds, and 3 assists. Christian Braun was key for the Jayhawks bringing energy on the defensive end making shots tough for the opposing players. Christian was impactful on the offensive end while being aggressive on the glass for rebounds.