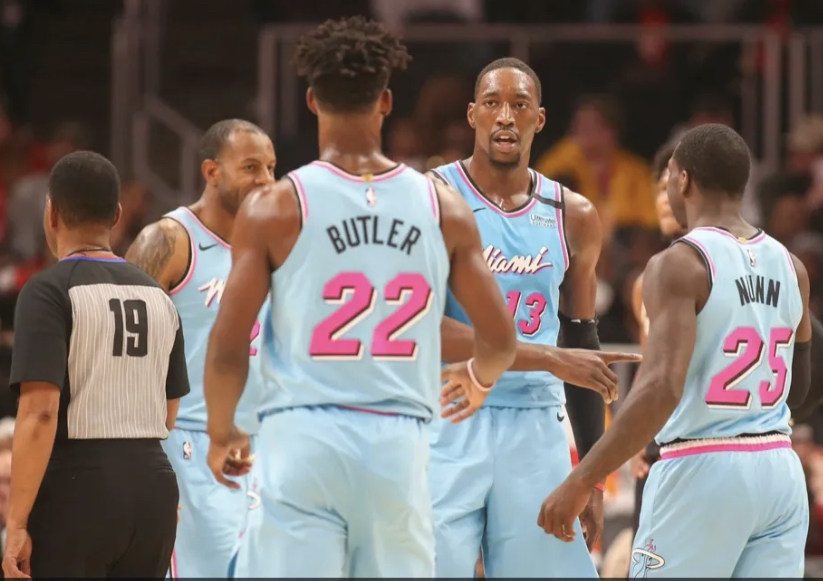 The Miami Heat enter the offseason with a lot of questions after their swift exit from last season’s playoffs. Many of those questions revolve around not just the possibility of adding new players, but also cap space. There have been many names attached to the possibility of taking their talents to South Beach in the rumor mill, which leaves Miami with a lot of avenues to explore.

Yesterday, the Heat picked up the $19.4 million option on Goran Dragic’s deal to utilize him as part of a sign and trade deal. Many signs point to the Heat trading Dragic to the Toronto Raptors for Kyle Lowry, whom the Heat has shown high interest for. The Raptors would want something extra along with acquiring Dragic in exchange for Lowry, however.

One such possibility would be Miami adding Precious Achiuwa into the trade package. Another possibility would be seeing prospect KZ Okpala being added with Dragic. Either way, the Raptors are looking towards the future with Pascal Siakam and will need a veteran and a prospect to build around him. As for the Heat, adding a point guard to take the load off Jimmy Butler and Kendrick Nunn will be beneficial.

It should be noted that during the midseason trade deadline last season, Lowry was still on the Heat’s radar, but in order to pull off the acquisition, they needed the Dallas Mavericks as part of the deal. The Heat were looking to trade Dragic to the Mavs, but were unable to work out any deal. Looking forward from this, Dallas may regret not being a part of this deal, which could’ve helped their star, Luka Doncic, a great deal.

While on the subject of sign and trade deals, the Heat have also explored the possibility of bringing in DeMar DeRozan. Unlike the previous sign and trade scenario, this scenario won’t involve Miami having to trade away a player, though that option is still in the air. Should Miami look to reunite DeRozan and Lowry, they could give DeRozan a mid-level exception deal, which is a three year deal up to $5 million dollars.  This deal would certainly be beneficial for both parties, especially for Miami, which will allow them to go after top free agents.

The aforementioned Mavericks, however, look to also acquire DeRozan. The reason why Dallas is trying to acquire DeRozan is not only to bring help for Doncic, but to also redeem themselves after going through the midseason trade deadline and not getting a second star. While there are several options out there, the Mavericks will have to do more if they want to keep Doncic happy.

As for the top free agents in this year’s market, there is no one agent more coveted than Kawhi Leonard. Leonard, who sat out during much of the second round and the conference finals for the Clippers’ playoff run, has declined his $36 million dollar option of his $39 million-dollar deal. While it is expected that the Clippers look to retain Leonard, other teams are going to make a push to sign him, more specifically Miami and the Los Angeles Lakers.

Recently, the Lakers acquired Russell Westbrook through a sign and trade deal that sent Kyle Kuzma, Montrezl Harrell, and Kentavious Caldwell-Pope to the Washington Wizards. While a big three in Hollywood is exciting, the chance of seeing Kawhi in a Lakers uniform is a can’t miss opportunity. Same could be said for seeing Kawhi in a Heat uniform. Miami has a reputation for being a defensive-minded team and adding Kawhi can strengthen the team’s defense.

Other free agents that Miami have had their eyes on are Damian Lillard, Jeff Green, and Bradley Beal. With Lillard, Miami will have another star that can help the Heat as a floor general, but that would also mean giving up a star player in exchange to Portland, which the Heat don’t want to explore.

With Jeff Green, the Heat will have a bench player who can do the dirty work with decent minutes. As for Bradley Beal, the Heat have been linked to the Wizards shooting guard for a long time, however, Beal wishes to stay with the Wizards, who are looking more and more like a team going through a rebuild. Should the Heat look to bring in Beal, it would be through a sign and trade that could include some young players and a draft pick.

There are a lot of options for Miami to look into before the start of the free agency market, but will they get the big star they want? Will they find a way to keep certain players while also bringing in additional talent to boost their core? Will they also keep or trade Victor Oladipo? The only person who knows all those answers is Pat Riley.