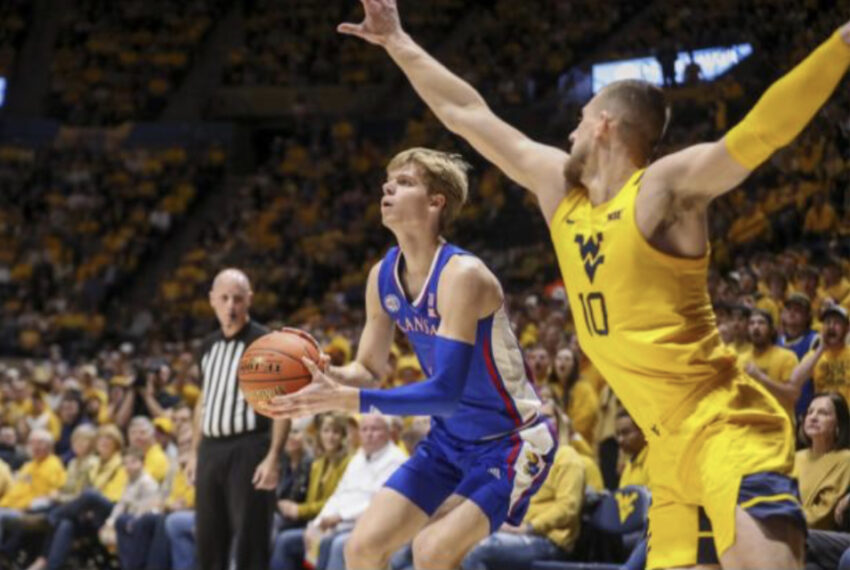 Kansas guard Gradey Dick has become one of the best scorers in the country. The 6’8” Freshman from Wichita, Kansas, is shooting around 47% from the field and 47.8% from the deep. This percentage is what has driven him to the potential top 5 pick.

Dick is capable of making triples, given a spot-up opportunity, he is also efficient when moving the ball around the court. The Jayhawks Freshman can fade away from his defender in any direction to free up space, or when playing off of a screen for a fast catch-and-shoot, or off the bounce.

In his last five games, this talented Freshman has also been averaging around 13.2 points per game, which at the moment it’s just below his season tally of 14.8.

During his last game, Dick shot 57.1% from the field, while shooting 66.7% from deep. Those numbers allowed him to score 16 points during the 26 minutes he spent on the court.

Not only did he make his presence known in the scoring category during the game, but  also managed grabbing five rebounds and dishing out two assists in their 76 to 62 win against their in-conference rival the West Virigina Mountaineers.

As a Jayhawk Freshman player, he has dominated in the arena of leadership. Gradey Dick is a natural leader and facilitator on and off the court. Dick demonstrates his passion for the game consistently. He genuinely plays to win, and he has always had his team’s best interests at heart. This characteristic was evident during his Senior year at Sunrise Christian Academy, where he was the number one option against some of the top high school teams in the nation.

During his Senior year he guided his team to the championship and earned the prestigious award as the Gatorade Boys Basketball Player of the Year. This accolade along with the ability to control and move the ball depicted him as one of the main players for the top collegiate teams in the nation.

Though he can be categorized as being a proficient scorer, Dick does however possess weaknesses in his b-ball game. One of his biggest weaknesses is that he lacks the explosiveness and innovative maneuvers necessary to elude skilled opponents when driving the ball.

He prefers to drive straight and uses his strength and power to get to the rim. That has been effective up until now as he is currently playing at the collegiate level, that being said, this kind of play will probably hinder him at the pro level. When comparing him to some of the other guards in his class, his power can be a detriment.

Although he may not be a particularly excellent individual defender at the point of attack, his confidence, athleticism, his great size and agility is beneficial to his game play as he continues to establish himself at the collegiate level.

When analyzing Dick as a player, you come to realize that he is a coachable and knowledgeable team defender who is familiar with rotations and game plans. He is capable of taking hits and receiving and frequently finds himself in dominant positions on the defensive end. That ability has allowed him to obtain multiple charging calls.

Dick and the Jayhawks host their next game against the Oklahoma Sooners at home. This game will continue to indent a notch into the top picks of the mock drafts for Dick while simultaneously mastering the court!