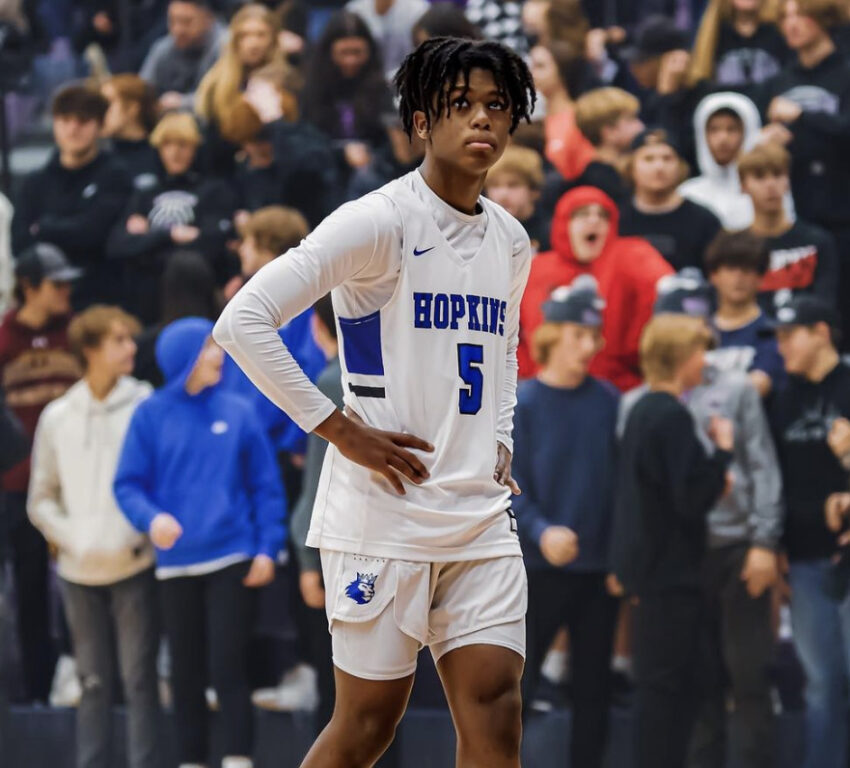 1) Jayden Moore – Point Guard – Minnesota: Jayden Moore is the best guard in his class and arguably the best player. Jayden is a very crafty guard that blows by defenders with his quickness. Jayden is a good three point shooter in the catch and shoot and off the dribble. Jayden has a good IQ for the game and you can see that in his playmaking ability. Especially in the pick and roll and when headed to the paint he attacks it with a purpose. Jayden is active on defense with his quick hands really disrupts offenses.

2) Brayden Fogle (6’4”) – Forward – Ohio: Brayden Fogle has good size and feel for the game. Brayden attacks the rim strong and finishes through traffic. Brayden has bounce and will poke it when given the opportunity. Brayden is very good on the defensive end with his ability to use his active hands to get steals and contesting at the rim.

4) Marcus Johnson (6’1”) – Guard – Ohio: Marcus Johnson is a shooter and a confident one at that especially from three point range he pulls from deep. Marcus can pull up off the dribble and hit the three pointer as well as catch and shoot. Marcus is a guard with nice handle in the open court and makes plays in transition. Marcus is a smart defender and creates turnovers.

5) Caleb Holt (6’5”) – Forward – Alabama: Caleb is an explosive forward that can finish at the rim or use his floater when driving to the hole. Caleb shoots the three very well making him a triple threat on the offensive end. Caleb has very good defensive instincts.

6) AJ Dybansta (6’7”) – Forward – Massachusetts: AJ Dybansta is an athletic forward that has good size and length for his age. AJ is a shot blocker in the paint. AJ can go up and get lobs and putbacks anytime he is around that rim. AJ has the ability to dribble off the bounce and finish at the rim. AJ can step out and knock down the three point shot.

7) Chris Washington (6’7”) – Forward – Florida: Chris Washington has a long skinny frame but doesn’t play like it the forward is athletic. Chris is active around the rim when it comes to rim protection. On the offensive side Chris is a lob and put back finisher. Chris has a nice pull up jumper in the midrange and can stretch the floor by hitting the three ball pretty well.

8) Tim Winkler III (6’8”) – Forward – Illinois: Tim Winkler III has a nice frame and can rebound very well. Tim has a nice touch around the rim and can add it up in a hurry. Tim can score in the mid range and extend it to the three point line.

9) Jermel Thomas – Guard – New York: Jermel Thomas is a very skilled guard that is ready for the big moments. Jermel is a smart player which makes it easy for him to playmake for himself and others. Jermel is a strong guard and displays that when he drives to the hoop. Jermel is a knockdown shooter so dont leave him open it.

10) Latrell Allmond(6’7”) – Forward – North Carolina: Latrell Allmond is very active on the glass and rebounds and put backs a lot. Latrell can finish at the rim and doesnt attack lightly. Latrell can hit the three ball as well that helps stretch his game and makes him a real threat.

Honorable Mention) Sam Funches (6’9”) – Forward – Mississippi: Sam Funches has a long frame that makes him versatile. Sam has a nice jumper and can knock down pretty consistently. Sam can push the tempo and handle the ball in transition and make plays.