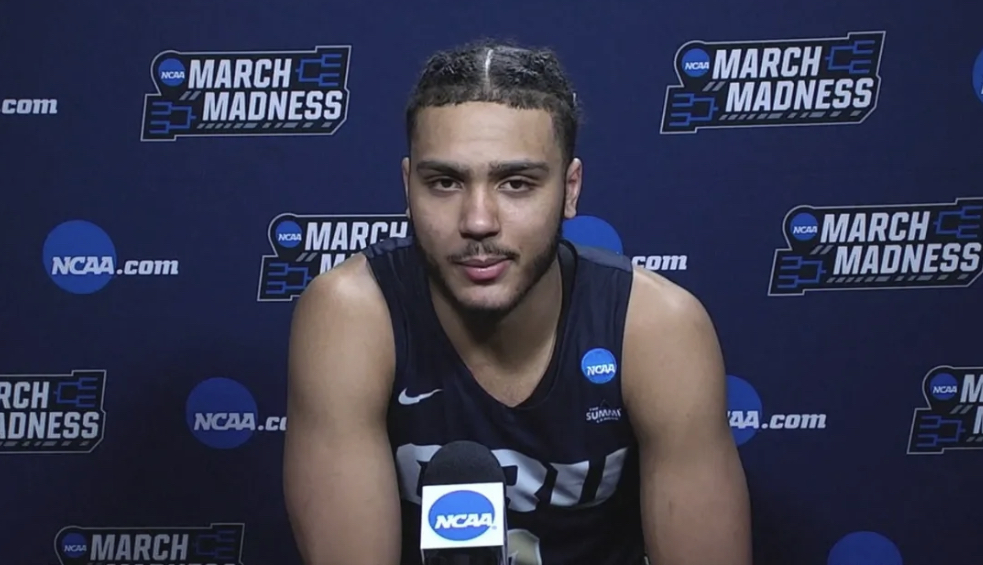 We are witnessing the most upsets in NCAA March Madness history. With that, Anthony Forrester takes a look at his top performers in the tournament so far.

Kevin Obanor entered the tournament with his team, Oral Roberts, as a 15 seed in the NCAA tournament. With the odds not in his team’s favor, Kevin and the Golden Eagles busted many brackets when Oral Roberts upset Ohio State in the first round. Kevin exploded for 30 points and 11 rebounds vs the Buckeyes. Kevin followed that performance with his second double-double of the tournament in the second round vs the Florida Gators. In that game, the stretch forward put up 28 points while hitting four 3’s, grabbing 11 rebounds, and getting it done on both ends with four steals to upset the Gators in the second round. Kevin looks to keep the Golden Eagles dancing in the tournament as they face Arkansas in the Sweet Sixteen.

Max Abmas leads the nation in scoring and didn’t allow the NCAA tournament to faze him as he has continued to score the basketball at a very high rate. In the first round, Max dropped 29 points, 5 rebounds, and 3 steals in the upset win over Ohio State. In the second round, Max scored 26 points while dishing out 7 assists and 2 steals vs the Florida Gators for the Golden Eagles’ second upset victory in the tournament. The sophomore guard has shown he belongs on the big stage and looks to lead his team to another victory when the Golden Eagles face Arkansas in the Sweet Sixteen.

Buddy Boeheim came into the tournament shooting 39% from 3 for the regular season and he has continued to build on that as Syracuse entered the NCAA tournament. Buddy scored 30 points in the first round of the tournament shooting 7-10 from 3 point range in a victory over San Diego State. Buddy stayed on fire from 3 in the second round when he dropped 25 points 6-13 from 3 point range while adding 2 steals in an upset victory over a tough West Virginia team. Buddy looks to keep a hot hand as Syracuse one of two ACC teams remaining (Flordia State) faces Houston in the Sweet Sixteen.

Luka Garza is one of the best players in all of college basketball and in the NCAA tournament he didn’t disappoint. Entering the first round Luka did a little bit of everything vs Grand Canyon he scored 24 points, grabbed 6 rebounds, 2 steals, and 1 block. Luka is the type of player who impacts the game in so many ways when he steps on the floor. Luka had a challenge in the second round when his Iowa Hawkeyes faced a well-balanced Oregon team. Luka gave everything he had vs Oregon scoring 36 points 3-4 from 3 point range and 9 rebounds but it was not enough to defeat Oregon in the second round. Lukas and Iowas NCAA run might have been cut short but his legacy in college basketball will live on.

Justin Smith, the University of Indiana transfer has been a great addition to the Arkansas Razorbacks. The 6’7” forward has been outstanding this tournament for the Razorbacks. Going into the first round Justin showed how he can be effective on both ends of the floor putting up 29 points, grabbing 13 rebounds, 5 blocks, and 2 steals in a win vs Colgate. Justin followed that performance up with 20 points and 6 rebounds in a nail-bitter win vs Texas tech. The grad transfer set a new record already with Arkansas by scoring the most points 49 in his first two tournament games combined with the Razorbacks.

Cameron Thomas averaged 23 points per game this season as a freshman in the SEC. As the LSU Tigers entered the tournament as an 8th seed Cameron showed his talents in the tournament. In the first round, the Tigers played vs St Bonaventure where Cameron went off for 27 points while adding 4 rebounds and 3 assists. Going into the second round the LSU Tigers will face a big challenge going up against the 1 seeded Michigan Wolverines. In the Second round Cameron put up 30 points but it wasn’t enough as the Tigers came up short vs the Wolverines. LSU might have lost the game but Cameron showed he is one of the top freshmen guards in the country.

Jeremiah Robinson Earl has been solid for the Villanova Wildcats all season. Entering the tournament Villanova selected as a 5 seed faced Winthrop in the first round where Jeremiah filled up the stat sheet with 22 points, 11 rebounds, 6 assists, 1 steal, and 3 blocks. Jeremiah’s ability to do so many things on the floor makes him an X factor for the Wildcats. In the second round, Villanova faced North Texas a bracket buster team that beat Purdue the round before. Versus North Texas, Jeremiah did a little bit of everything once again racking up 18 points, 6 rebounds, 6 assists, 1 steal and, 1 block. Jeremiah looks to keep the Wildcats alive as they face the Baylor Bears in the Sweet Sixteen.

Javion Hamlet and the North Texas Mean Green entered the tournament out of  Conference USA. Javion led the Mean green to a first-round upset vs Perdue in that game he averaged 24 points, 12 rebounds, and 5 assist. That win versus Perdue was North Texas first win in the NCAA tournament. After making history the Mean Green faced Villanova Javion scored 25 points had 6 rebounds and 4 assist as the mean green came up short vs Villanova. The cinderella story might have come to an end but Javion showed he can play with the best of them.

Ethan Thompson and the Oregon State Beavers faced Tennessee in the first round of the tournament. Ethan put up a double-double in the win versus Tennessee with 13 points, 10 rebounds, and 6 assists. In the second round, the senior guard faced Oklahoma State in a matchup vs Cade Cunnigham a projected top 5 pick in this upcoming NBA draft. Ethan came out on top with 26 points, 7 rebounds,1 steal, and 1 block as he helped lead Oregon State to the Sweet Sixteen for the first time in 39 years. Ethan looks to keep up his solid play in the tournament when the Beavers play Loyola Chicago in the Sweet Sixteen.

Cameron Krutwig played in the Final Four as a freshman for Loyola Chicago and now returning to the tournament as a senior. In the first round, Loyola defeated Georgia Tech in that game Cameron scored 10 points and had 5 rebounds. After defeating Georgia Tech Loyola had to face who most had to win the whole tournament the Illinois Fighting Illini. In the second round Cameron came up big like he always does for Loyola dropping 19 points, 12 rebounds, 5 assist,s and 4 steals. The leadership and energy Cameron has are contagious and his teammates play better when Cameron is playing at the highest level. Cameron and Loyola are still dancing as they face Oregon State in the Sweet Sixteen.