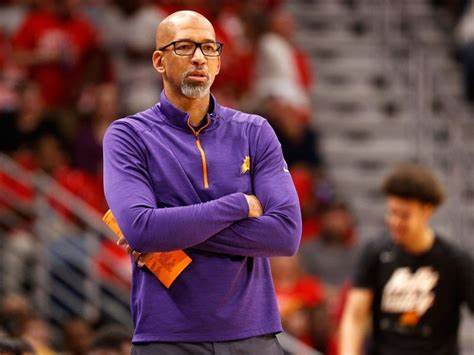 From the #1 seed in the 2021-22 and making the NBA tournament, to now being the 7th
seed in the Western conference, it’s time we discuss what is going wrong with the Phoenix
Suns. They started the 2023 season off pretty strong after Losing to the Mavericks last year in
game 7 of the Western Conference Semifinals, winning 15 out of their first 20 games of the
2022-23 season.

Since then they have faced some injuries like big time guard Devin Booker and they
have now lost 9 of their last 12 games. Clearly things have taken a turn for the worst for the
Suns. With that Being said it’s time to discuss 5 takeaways from the Suns losing streak.

1: The Suns are a lost Cause without Devin Booker.

Devin Booker is a key to this Phoenix offense, and without him, it’s evident that the Sun’s
struggle. Booker is a big contributor to this team as he totals for 27.1 PPG and does so
effectively with a 47% FG%. He also generates plays for the other guys on the team and gets
them open shots as he averages 5.6 assists per game. They may have Bridges and Ayton, but
those two aren’t enough to carry this team.
Booker has been out since the December 27th game against the Grizzlies due to an
injury, and him being out has definitely taken a toll on this team. Since he went out, the Suns
record has been 4-9. This is most likely due to how effective Booker is for the team. When he is
in, other teams focus on putting their best defender on him, but he still knows how to make
plays. With him out the Suns aren’t only missing their most effective playmaker, but they are
also missing the guy they rely on to score, pass, and ultimately missing their leader. The closest
person in terms of leading this team, could be Chris Paul, but he is out as well, and that’s not
going well for the team either.

2: The Suns Turnovers have cost them games

In the Suns last 10 games, it hasn’t been shooting, rebounding, or even fouling that has
been costing them games. The team is without Guard Devin Booker, and Chris Paul’s
comeback did help them get the win over the Grizzlies but the problem with this team is
turnovers.
In the last 10 games the Suns are averaging 16 turnovers, compared to their opponents
only averaging 12.The cause of this is because The Suns are not playing disciplined basketball.
They are throwing one-handed, left-handed passes, and trying to make interior passes against
teams that clog the paint when a 3-point shot would be a better option. They are also not
attacking the offensive glass and waiting for the ball to come to them, allowing smaller players to
be the aggressor and go after the ball. Furthermore, they are allowing too many points off of
their turnovers. The only loss that they have had that was a horrible loss was the 30 point Loss
to the Grizzlies, but other than that the games have been close enough to where the turnovers
actually have impacted the game.

There are numerous moments from this season that make the Suns look like a
completely different team then what they were a year ago. Firstly, the tensions between Ayton
and Williams have been up and down all season, and videos have circulated showing Ayton and
Williams getting into it on the bench throughout the games. This tension not only obviously
makes Ayton seem uncoachable but it also causes tensions with his teammates as well.
Secondly, The Phoenix Suns have struggled with consistency this season due to their
lack of depth and the fact that they haven’t been able to put together a streak of wins that would
make them a serious contender. They have gone through multiple stretches of wins and losses,
including periods of three or more straight losses and three or more straight wins. This
inconsistency has been compounded by the fact that the team has been without its star player,
Devin Booker, for multiple games, which has further hindered their ability to find a rhythm and
build momentum. As a result, the Suns have been unable to make a case for themselves as a
legitimate championship contender this season. They also went from being #1 in the West, then
dropping to 4th, and currently they are #7.

4: Chris Paul has passed his prime

Chris Paul has officially entered the category of being Washed. He has been in the
league for 17 years, and let’s face it, he is no Lebron James. His Longevity has passed and
while he is a good asset to have alongside Booker, he isn’t the man you think of when you hear
the Suns.
Chris Paul is 37 years old and is in the twilight of his career. He has seen a decline in his
scoring ability over recent seasons and his usage rate, which measures the percentage of team
plays in which a player is used, has also dropped. Furthermore, his career high in points per
game is 22.8, which was set a full decade ago and he has only averaged more than 20 points
twice in his career.He currently is averaging his lowest points per game at 13.4 and He is
shooting a career-low 42.2 percent from the field, and his overall play has been hindered by the
physical demands of the game. As he has gotten older, he has become less agile and less
explosive, which has decreased his effectiveness on the court. All of these factors have
contributed to Paul being passed his prime. After this season, it may be time for him to retire.

5: Deandre Ayton Needs to Step up as a leader for this team

One of the Many reasons that the Suns were the Number one seed last year was
because of the Booker to Ayton Duo. Ayton Without Booker has failed to show up as a leader
for this team and that has been visible throughout the season. He needs to accept the coaching
from Williams and he needs to find a way to get this team under his wing to win some games.
Ayton is a good inside player and while Booker is out he should Work with Cameron
Johnson. Ayton is a good option for the Screen and Roll option and the Suns team needs to try
and Capitalize on that. Ayton needs to be the threat for the Suns to execute with, but he
struggles with his inconsistency and he causes tension within the team