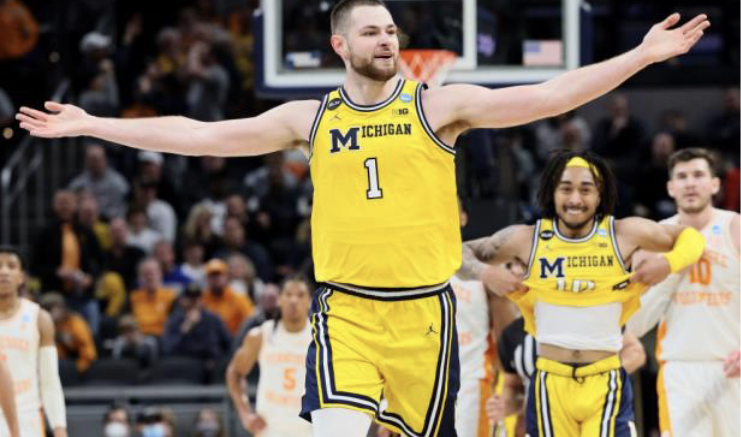 Michigan basketball’s numbers look decent on paper. They are 10-8 overall and 4-3 in conference play. However, they suffered three tough losses to Big Ten opponents, Iowa, Maryland, and their rivalry, Michigan State. Rival losses are competitive games, but the defeat could hurt their resume for the NCAA tournament.

The Wolverines picked up some momentum after winning at home against Northwestern. But it was quickly burnt out as Thursday night they faced a tough road loss against the Terrapins in College Park. This season so far has been a bit of a rollercoaster for the Wolverines, and they are only halfway through.

In this league, every game during conference play takes 100% from every player. I’m not quite sure Michigan can hold up its end of the bargain. The Wolverines continue to struggle to make stops, rebound consistently, and create offensive opportunities during the transition.

At this point, Michigan is 77th in the NET, and 53 in KenPom. If the Wolverines want to have a serious chance at Dancing this year, they will need to pick up the pace to prove to opponents they are a sturdy and consistent contender to fear playing in this gauntlet of a conference.

The Wolverines have a noteworthy, but young, roster. Freshman Jett Howard put up 16 points against Northwestern and a whopping 34 points against Iowa. Sophomore Kobe Bufkin and freshman Dug McDaniel have had some impactful games, putting up big numbers, especially in rebounds and assists. However, turnovers continue to be a problem for the Wolverines. Junior Hunter Dickinson needs to step up as Captain to get his team fired, and even more importantly, cleaned up.

Michigan needs to do better at protecting the ball. The Big Ten is packed full of defensively competitive teams, and if they want any chance at dominating on the road, they will need to get focused. The Wolverines need to lock in and keep the ball in their zone.

Hunter Dickinson is no stranger to being an outspoken leader for his team, so it is time for him to turn it on and get his squad fired up for the rest of the season. They still have a long way to go, and they are teetering on the edge of an NCAA tournament bid. However, the Wolverine’s season is not over yet, and there is still time to flip on the gas.

HD is a tough player. He reads the defense well and can capitalize on their mistakes. Dickinson can sink shots from an array of spots on the court, and even from both hands. He creates space by setting screens, then getting open for the jump hook shot. Dickinson leads his team in ppg (17.8) and averages 30.8 minutes per game. He is a rock-solid force to have on Juwan Howard’s roster.

But can the Wolverines’ offense remain in control when their opponent’s main goal is to double-team the threat that Dickinson poses? That is the blueprint that Big Ten teams have followed thus far. Dickinson is one of the few on Michigan’s roster who is trusted to create his own looks consistently, however, if he doesn’t sink the shots then the Wolverines will continue to be tested.

Hunter Dickinson was expected to be The Guy for Michigan basketball. At this point, it is unclear whether he is ready to meet that standard. He has amazing potential, and the Wolverines will need his confidence and guidance in the upcoming weeks as they work to improve their tournament resume.