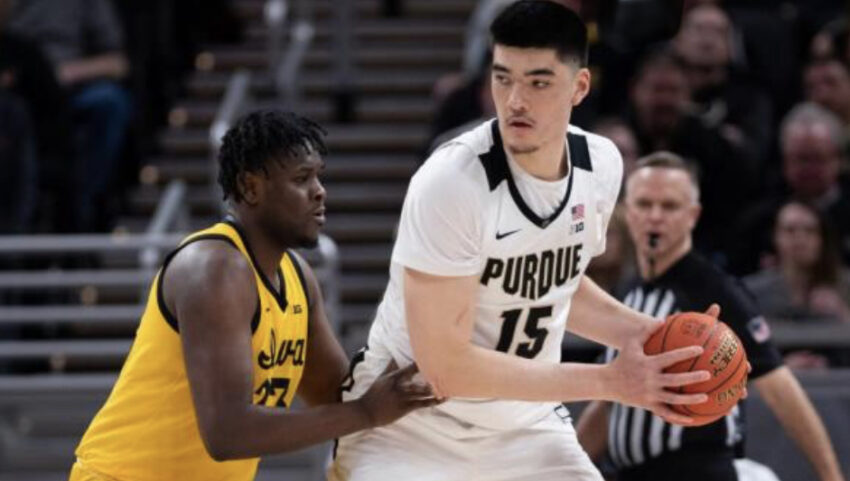 Purdue’s Zach Edey is a junior towering over his competition at 7-4 and 290 lbs. While he is built like a basketball star, the Canadian native did not pick up the sport until his junior year of high school. That means this season is only his 5th year playing basketball, but you would never know it based on his fluid strategies and intimidating athleticism.

During his high school senior season, Edey helped lead IMG Academy (Fla.) to the Under Armour Rise Championship. He was also ranked as one of the top-five players in Canada and competed on the Northern Kings AAU team. Although heavily recruited, Edey ultimately decided to be Boilermaker based on the team’s culture and prevalent history of developing big men similar to him.

Edey was nothing short of impressive during his breakout season for Purdue. He appeared in all 28 games, earning accolades such as Big Ten’s All-Freshman Team, freshman All-American team, and Big Ten Freshman of the Week in the very first and last weeks of the season.

He averaged 8.7 points and 4.4 rebounds during his freshman year while shooting at a remarkable 59.7% from the field. This is the second-best percentage by a freshman in school history. Considering his height you might doubt his free throw ability, but Edey was able to shoot from 71.4% at the line.

Following this remarkable season, Edey competed in the summer of 2021 with Team Canada at the FIBA U19 World Cup in Latvia and led his team to a bronze medal. Edey went on to be named to the FIBA World Cup All-Star 5 team and his rebounds per game (14.1) are the third most by a player in the U19 World Cup history.

Returning to Purdue for his sophomore year, Edey had a monumental season for the Boilermakers. Edey shot 64.8% from the field and led the Big Ten and third nationally in field goal percentage. He also collected 11 double-doubles throughout the season, which is most impressive figuring that most of those were recorded in under 25 minutes.

Based on his progress, development, and natural ability, Zach Edey might be one of the best centers in college basketball. In the summer of 2022, ZE competed with Canada’s National Team in its FIBA World Cup Qualifiers. Edey is a huge asset to the Boilermakers, and head coach Matt Painter is lucky to have him on his roster for another season.

Zed is having nothing short of a fantastic 2022-23 season. Opposing teams, players, and coaches analyze his gameplay hoping to find a weak link in his skills and athleticism. Unfortunately for them, Edey can work around the pressure and dominate in the paint. He will be sure to make you regret a mindless mistake when he capitalizes with a swift dunk after towering over his competition.

On January 4th, The Wooden Award released its 2022-23 midseason watch list and Zach Edey was among the top 25 players to receive this honorable recognition. This is huge for the big man, as his talent has only been fostered for a few years, yet he is making statements louder than most players do in decade-long careers.

The Boilermakers suffered a tough loss at home to the relentless Rutgers Scarlet Knights on Monday evening. Up next they will face two grueling matches on the road against Ohio State and Penn State. Purdue will need to utilize Zach Edey’s size and skill to knock down the competition and remain a consistent threat throughout the rest of the season.