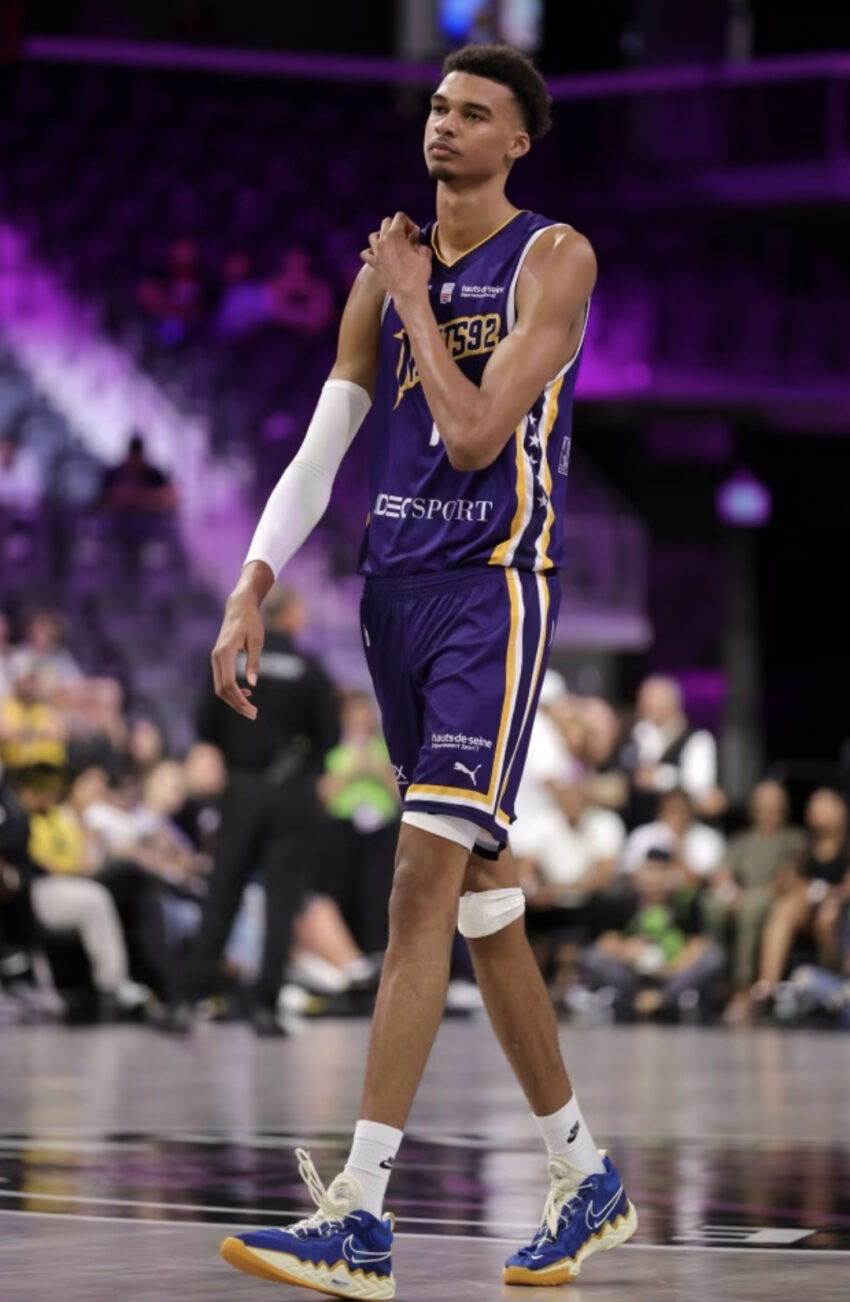 This year’s 2023 NBA Draft holds one of the most exciting prospects of this generation, seven-foot-four French native Victor Wembanyama. At the age of eighteen, his talent is levels beyond the rest of his draft class and is projected to get drafted No.1 with no doubts about it. There are many positives in his game that Victor possesses, but here are the notable skills he obtains that have NBA scouts raving over.

​Throughout the history of the NBA, players that stood over seven feet, were very limited in terms of skill and ability on the floor. Victor is one of the very few that can move exceptionally laterally and vertically at his size. When watching how he moves on the court, at the speed that he does, Victor has no issues keeping up with guards on the defensive end. that’s a huge upside for teams to have in this era of basketball because of the constant screening and switching defenses encounter every possession. NBA star Giannis Antetokounmpo was very impressed watching Victor play for the first time in Nashville.

“…The way he can move, he’s extremely fast for his size. He can block shots, can be a threat on the defensive end, he’s unbelievable.”

LeBron James of the Los Angeles Lakers also expressed his thoughts about Victor, saying he’s more like an alien than a unicorn.

“Everybody’s been a unicorn over the last few years, but he’s more like an alien. No one has ever seen anyone as tall as he is but as fluid and graceful as he is on the floor.”

“He’s for sure a generational talent. Hopefully, he continues o stay healthy. That’s the important thing for him.

Along with Victor’s massive height that helps him score over defenders and being able to defend anywhere on the floor, his length is just as notable. The eight-foot wingspan allows him to chase down blocks and can cover a lot of ground. The size and length Victor obtains truly makes him un-guardable, which only leaves you to pray that he has a cold night against you. The Orlando Magic have their own seven-foot plus “do it all” in Bol Bol, but speculations say that Victor does it better in all departments.

Most teams in the NBA run a four-out offensive set, fully utilizing the big men for their ability to shoot, which Victor has displayed in his arsenal of ways to score. Not only does he have the ability to knock down the open shot but can also make shots off the dribble while fading. Watching a player at his height sizing up defenders, fading away, or stepping back is unmatchedat the center position. Currently, he is shooting 31% from three-point range, which is not bad among centers in the NBA. Victor’s versatility on the offensive side of the ball will make him an easy fit for any team that’s lucky to draft him.

One of the more outstanding parts of Victor’s game is the fluidity and control he has with dribbling the basketball. He is completely comfortable with chaining moves together without losing control. There are moments in games where Victor isolates his defender beyond the perimeter and combos dribbling moves like a guard. There aren’t any centers in the NBA who isolate above the three-point line, doing consecutive between-the-legs dribbling moves to get by their defender like Victor. Not many centers can defend beyond the free-throw line, making Victor a match-up nightmare.

Being that Victor is stellar on both ends of the ball, on top of his size, makes him a lock for No.1 for this year’s upcoming draft. He is currently dominating overseas averaging 23 points, 9 rebounds, and three blocks. At eighteen years old, Victor shows a major understanding of the game, he knows how to use his body and get to his spots to score the basketball. With all the hype going around him, there’s no doubt that NBA teams will look towards Victor as a new face for their organization to further build around him.

People all over the league are excited when Victor joins the NBA––even the players. The NBA has received players from France that have made successful careers while playing, such as Tony Parker Joakim Noah, Evan Fournier, and Nicolas Batum. If Victor holds up to the expectations that were given to him, his name can be up there with all the other international greats that played in the NBA. Teams that have qualified for lottery picks for the 2023 draft will be on the edges of their seats the day of the NBA lottery for a chance for the first pick. This kid is a big deal this summer and I’m sure NBA fans can’t wait to see how Victor will pan out come September.