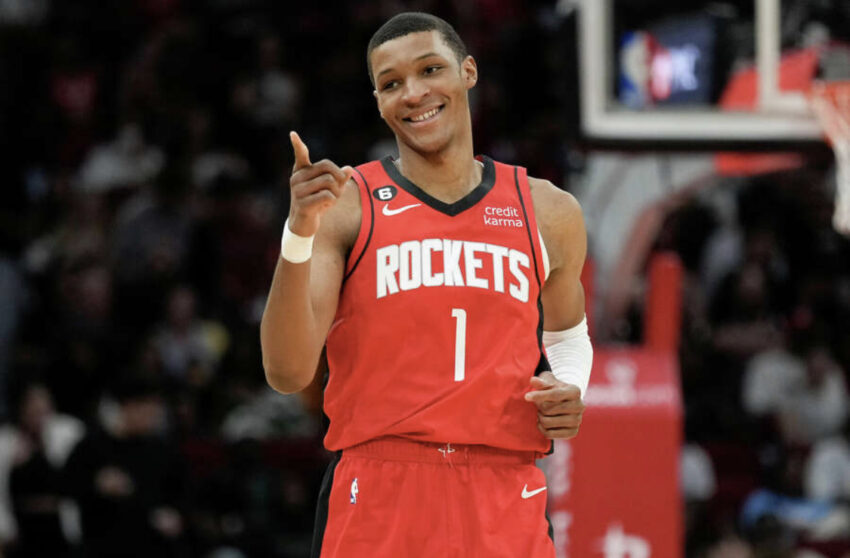 The third pick of this year’s draft, Jabari Smith Jr., continues to stay among the leaders of the rookie class after a slow start. Being a rookie in the NBA can have its ups and downs, as for Jabari, he has played fairly consistent all season––displaying the effects of his “3 & D” playstyle. The Rookie Of The Year award doesn’t look like it’ll fall to Jabari, but being top of his class still shines a bright light on his future.

Being a new face in the NBA can be challenging for a lot of players, even the top picks in the draft. Trying to figure out how to fit in the new system, wanting to prove yourself, and upholding the expectations can all add pressure to a young player. Jabari had a bit of a struggle in his first 12 games as a professional, averaging 10.3 points, 6.8 rebounds, and 1.1 blocks on 28.6% shooting from 3-point range. Shooting is one of his strengths on the offensive end, so scoring can be difficult for him if his shot isn’t falling since he isn’t a solid finisher around the rim. Soon after experiencing a rough start to his career, an improvement in his play showed why he was a top prospect in the draft.

Since those first 12 games up until the first week of December, the six-foot-ten forward tallied 14.3 points and 7.1 rebounds on 44% shooting from 3-point range. Smith had a run of six games with at least three 3-pointers in that stretch, which was the second-longest such streak by a rookie. Smith is currently ranked second in his class in three-pointers made with a total of 65, only five three-pointers behind the leader, Keegan Murray.

“Nothing’s really different,” Smith said in an exclusive interview with Jackson Gatlin of “Locked on Rocket”. “I’ve just been working on my craft a lot more off the court. I’m just trying to get up extra shots and get in extra work. I’m trying to find my rhythm, find where I can get my shots from, and find my niche to help this team.”

Smith had a career night against the Spurs on Thursday, December 9th. He finished the contest with 23 points, four rebounds, and one block. Smith also had a season-high making nine of thirteen field goal attempts including 4-of-7 from three-point range. The Rockets struggled the majority of the game, but Smith was one of the few that produced for Houston in efforts to try and carry them to a win––despite the loss.

“He was great,” Rockets coach Stephen Silas said. “When the ball moved, he got good looks. I put him at the five-some, he got some pick and pops, which were good. He played a good game.”

Among the rookie class, Smith is a top-ranked name in multiple stats, leaving Houston fans with no worries about him. He occupies the fourth spot in scoring, second in rebounding, second in double-doubles, and third in blocks. Within the last five games, Smith’s numbers have dropped a few spots, making him seventh in points and rebounds, and tied for sixth in blocks. Stats will continue to flocculate for Smith due to the assumption that’ll have stretches of being hot and cold, as most rookies deal with.

In Saturday’s loss against the Knicks at home, Smith had a quiet performance, only tallying 10 points from 3-of-8 shooting. The three field goals came from deep shooting 3-of-6, displaying his ability to be a threat behind the arc for defenses. Smith brought down just two rebounds in 20 minutes of work. His rebounding at the professional level is inconsistent, where will get 12 rebounds in a game, then only get four rebounds the next. The Rockets now fall to 10-29 of the season, the loss snapped the Knicks’ eight-game losing streak, pushing their record one game above .500.

While Houston has been going through tough seasons trying to rebuild, they have promising pieces on their roster, like Jalen Green and Jabari Smith Jr. Smith fits well in offenses in today’s game by stretching out the floor and being able to guard players on the perimeter. At 6’10, he can move with the ball smoothly and bring it up the court for a pull-up jumper. Smith’s shot creating in the mid-range is what also helps him stand out. He can back down smaller defenders, or forwards that are his size, and make a turnaround shot. Smith has a lot of game to him already, he and Jalen Green will be the main guys that Houston plays to build around in the years to come.

“We’re growing together,” said Smith, whose presence is also growing as a defender and rebounder. “he’s telling me to trust the work through the struggles. Trust what I’ve done to get here, and trust that I belong here. He keeps giving me that encouragement, because you know how his rookie season went. He’s always uplifting me.”

The Houston Rockets are a young team with promising talent in players like Kevin Porter Jr., and Alperen Sengun around Jalen Green and Jabari Smith Jr. A lottery pick will likely be in Houston’s hands being that they’ll end the season as one of the bottom seeded teams in the western conference. Adding another elite talent to their youthful roster will only make the organization’s future brighter than before. As for Smith, working on the weaker areas of his game will be vital in this off-season, so he can leap forward to make a greater impact for his team. He and Jalen Green can be a heavy one-two punch for Houston because they will only get better when they really understand the game at the pro-level.