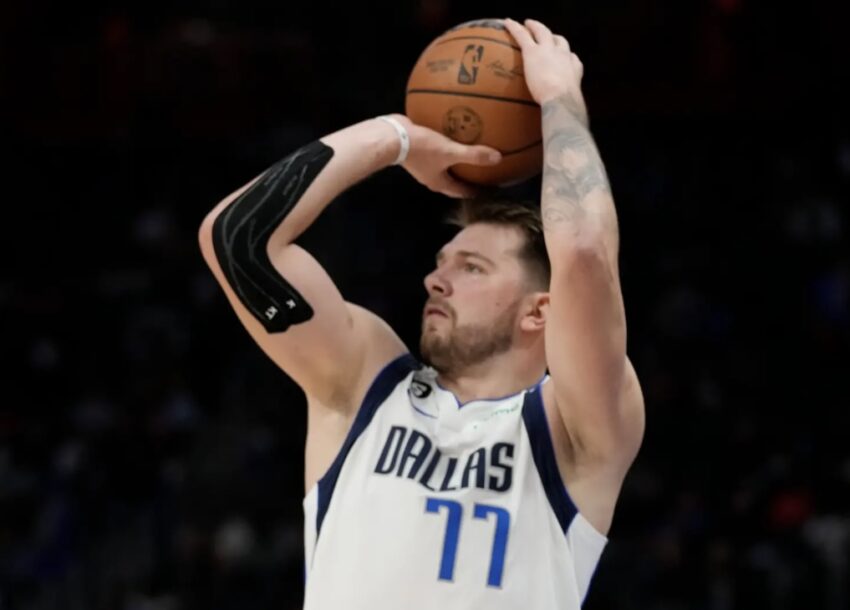 Luka Doncic is officially a quarter of the way through his 5th season and may be the most sensational player that has ever come through Dallas, alongside Dirk Nowitski. Luka has shown his talent, and has evolved his performance this season. With multiple 30+ point games under his belt, an explosive performance against previous NBA Champions, The Golden State Warriors, and a tie in “40 point games” record with 2011 champion, Dirk Nowitski, it is safe to say the 3 time all-star is a true contender for being named MVP.

Luka is currently putting up the best performance we have seen from him since his drafting in 2018. He is top 5 in multiple categories including #1 for points per game, number 3 in total points (1 point behind Stephen Curry), number 4 in assists, number 3 in total assists, and defensively he is number 4 in steals. He is also leading the NBA in Player Efficiency with a 31.61 rating. It’s definitely going to be the season to watch, with really only one other player who
may beat Luka in the race for MVP. This Player: Giannis Antetokounmpo.

Why Giannis is the favorite Over Luka
Both Luka and Giannis play big roles on their team and on paper Luka looks to be the better player right now, however many NBA analysts are putting Giannis in that number 1 spot. However, if Luka is doing better on paper, why would Giannis be the favorite for MVP?

The answer is simple: Winning.

Even with Luka’s amazing performances this season, the team overall isn’t doing as well as fans would have hoped. The Mavericks are currently 10th in the Western conference, sitting at a 11-11 record with a win over former teammate Jalen Brunson and the Knicks. This puts analysts in a predicament, as this placement doesn’t put them in contention to make the playoffs and there has only been one case in NBA history where the MVP didn’t make it to the playoffs (Kareem Abdul-Jabbar 1975-76 season).
In contrast, Giannis has been playing well, putting up 31.2 points per game, 11.5 rebounds per game, 5.5 assists per game, and he has a PER of 28.8. Giannis has put on some weight since he first joined the NBA and that has only helped him improve his game. As a 7 foot power forward, he has become a player that many fear to go up against. After all, he is Nicknamed “the Greek freak.” Luka has given Giannis his credit stating, “He’s the best player in the NBA right now. He’s almost impossible to stop. It’s really fun to see him play, but it’s not that fun to go against him.” Analysts share that same mindset with Luka as there aren’t many players that can shut Giannis down. Giannis continues to instill confidence in his teammates, and if the Bucks can keep winning, we may see Giannis grasp his third MVP in just 10 seasons.

The Bucks are currently second in the Western Conference with a 15-5 record, and they are currently 1st in their division. The Bucks also have a statement win over the Cavaliers, who had a great start to the season and also compete in the Bucks division. With that in mind, looking at an analyst’s point of view it would be hard to give Luka the MVP if Giannis is leading his team to victory and putting up these numbers.

Hopes For the rest of Luka’s season
While winning the MVP may be just out of arm’s reach right now, there is still hope for the young athlete if the Mavericks as a team can achieve the same results as last year. In the 2021-22 season, the Mavericks were off to a similar start when it comes to the first 20 games, and most of that comes from players finding their roles and getting that off-season rust off. The Mavericks were 11-9 in their first 20 games, however they bounced back and made it deep into the playoffs, losing to the Warriors who would go on to win the NBA finals.

In terms of Luka, his performance in those first 20 games last season doesn’t even compare to how he is doing this year. Last season he only had 5 games with over 30 points in the first 20 games, whereas this year he has 14 games where he has scored over 30. Not to mention 5 of those 14 games have been 40+ point games. Last season, Luka had 10 triple doubles, and this season he is projected to have more as he already has 5 in just 20 games. Overall, Luka this year seems stronger, faster, and overall just more explosive.

What has changed for Luka?

Luka slimming down was the best thing he could have done to prepare for this season. Even an out of shape Luka has had a history of having exceptional games, but multiple people have commented on his weight in the past because they believed it was limiting just how talented he could be. They knew that if an out of shape Luka can produce great numbers, then an in shape Luka would be scary. This includes Hall of Famer Reggie Miller, stating “He’s got to trim down a bit.” With the young athlete coming into his fifth season, it was time to change the way he spent his offseason to reach his full potential.

Entering the 2022-23 season many people noticed that Luka had a change in his build, appearing much slimmer. This was due to Luka taking his workouts more seriously in the off- season and partnering with two year trainer, Anze Macek.

Macek commented on Luka and his fitness over the summer stating “shortly after the end of the season, he contacted me and said that he wanted to start fitness training immediately.” Luka did go on vacation, but still remained active, and even asked Macek for a workout plan, even though most players would just take that time to relax. He has become scary for those who have to compete against him.

As the rest of the year goes on Luka has a chance to gain several accolades. He just recently matched Wilt Chamberlain’s record to score at least 30 points in the first seven games for the first time in 60 years. He also has a chance to pass Dirk Nowitski’s 40 point game record with their win over the Warriors, and has a big chance of winning MVP. If Luka can continue to dominate without risking burnout, and the tide changes for the Mavericks, analysts will probably shift from Giannis to Luka. Even Stephen A Smith has Doncic Favored for MVP. Luka also is in a transition from young athlete to experienced veteran, so he will more than likely step up as a leader and turn this team around. No one truly knows the future for Luka but if he continues playing at this pace he will leave a lasting impact for the Mavericks organization.