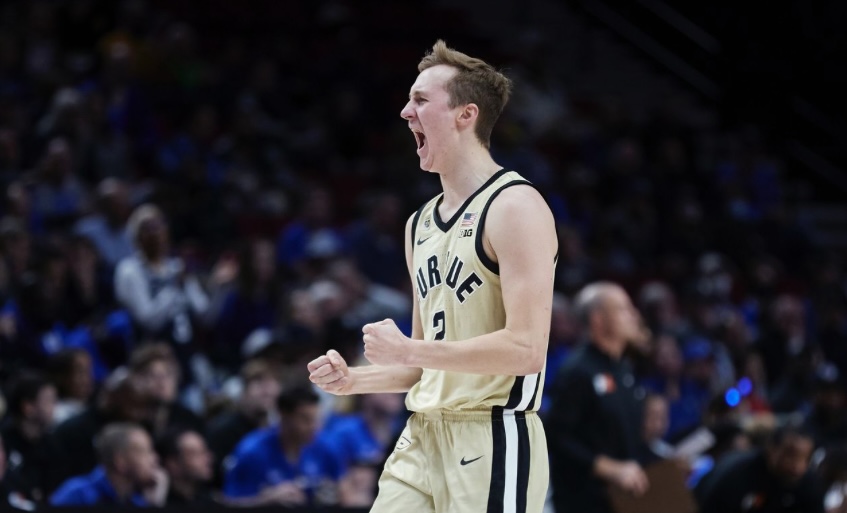 Purdue skyrocketed 19 spots in this week’s AP Top 25 College Basketball Poll to smoothly land themselves at a solid No. 5 ranking. The moon is the limit when a team is cooking ranked top 10 opponents twice in one week.

It must help when you are Purdue’s head coach Matt Painter and you have a dynamite freshman like Fletcher Loyer on your squad. Loyer started the season showing potential, but during the Phil Knight Legacy he turned on the gas and the court could feel his presence. His growing pains are quickly evolving into consequences for all of Purdue’s opponents.

This week Fletcher Loyer from Purdue earned freshman of the week honors as he had a standout performance in a complete two-game stretch resulting in huge wins over Gonzaga and Duke. Last Friday Boilermakers had an impressive win against the Zags in the Phil Knight Legacy (84-66). Loyer set a career-high during the game with 5 assists and 14 points while going three for six at the 3-point line.

Loyer’s impressive performance was topped a couple of days later in the event’s championship against Duke. Breaking his career high with 18 points, and once again going 50% at the 3-point line; Loyer played a key role in helping the Boilermakers take down the Blue Devils (75-56).

These wins are early, but nothing short of exceptional, as this was the first time a team has secured two victories against the top 10 teams of 18 or more points in the same week. The last team to do so was UCLA during the 1968 Big Dance, and they were in the Final Four.

Purdue is a huge threat this season, especially when Fletcher Loyer is sniping threes on the court.

Purdue freshman Fletcher Loyer is a 6-3 shooting guard. He was Indiana’s Gatorade Player of the Year in 2022 and committed to play at Purdue in 2020. He chose to be a Boilermaker over receiving offers from Nebraska, Michigan, Notre Dame, Utah,and Missouri.

During his senior year at Homestead High School, Loyer set the school’s single-season scoring record of 726. He made 73 3-pointers and a record-breaking 179 free throws. During the season he averaged 26.9 points, 5.3 rebounds, and 3.6 assists per game.

Loyer is the only player in Homestead history to have two seasons of 600 or more points. He finished his high school career with 2,163 points (803 at Clarkston High School in Michigan; 1,360 points at Homestead).

Loyer won the National High School 3-point Championship in New Orleans after his senior year. The Purdue Boilermakers are eager to see how fatal Loyer’s shot will be to their competition this season.

Loyer was named the Big Ten Freshman of the Week by averaging 12.3 points, 2.0 assists, and 1.7 rebounds in three games to help Purdue win the Phil Knight Legacy Championship. Purdue is now No. 5 in the nation and 7-0 on the season with victories over Gonzaga, Duke, and Florida State.

The Purdue Boilermakers will take on the Minnesota Golden Gophers at home in their first game in Big Ten play on Sunday, December 4th at 5 pm.