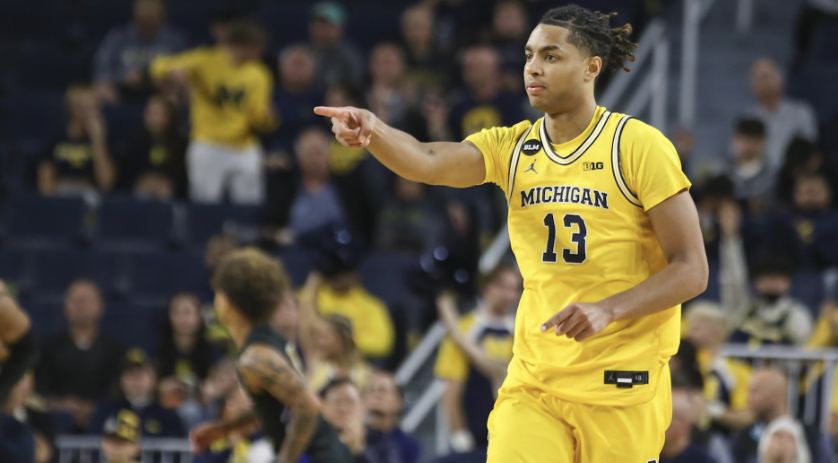 Michigan basketball Juwan Howard has been the head coach at Michigan since 2019 and he now has two of his sons on his roster: Jace and Jett Howard. Jett Howard is a freshman on theWolverine roster, joining the squad alongside his brother Jace, who is a junior and guard.

While some familiar names are returning to Michigan’s team, Jett Howard is one of Michigan’s five incoming freshmen and one of the nine new roster players.

Miami native Jett Howard is a top 100 recruit from the Class of 2022 earning himself many accolades and titles throughout his high school career at University School and IMG Academy in Florida. During his senior year, he averaged 13.5 points, 2.6 rebounds, and 2 assists leading his team to the semi-finals of the GEICO Nationals.

Howard is a versatile player with a unique skill set and overall athleticism. His lethal combo of size, shooting, and transition scoring allows him to be a big threat all over the court. Howard plays all three perimeter positions, opening the court and executing plays successfully. He is a confident player who capitalizes on big plays, making him the perfect addition to Michigan’s roster as someone they can look to in big games and moments.

Howard is a strong defender who brings fresh momentum to the court. He reads plays well and can think ahead of his competitors. As a freshman, he is already proving himself among the notorious and fierce Wolverine team.

The multitalented guard has been an influential part of Michigan’s starting lineup so far this season. Howard is averaging a career-best of 15.1 points per game and shooting 42.4% (25-for-59) from three. He is a strong asset, averaging a career-high 30.2 minutes per game.

Howard has shown an ability to score from all over the court and has especially been impressing the crowd with his success from beyond the arc.

Jett Howard earned Big Ten Freshman of the Week after showing he has a strong vision and impactful athleticism on the court. Despite his youth, Howard has already proven to be a leader on the court for the Wolverines. He is often seen directing his teammates and making smart decisions with the ball. His poise and maturity have been a welcome addition to Michigan’s lineup.

Head coach Juwan Howard praises his player and son for his attitude and approach to the game. “Jett is a special player and a special person,” Coach Howard said. “He is always striving to get better and is a great example for his teammates.”

As the season continues, Howard will look to build on his strong start and help lead the Wolverines to success. With his talent and drive, it is clear that Howard has a bright future ahead of him in college basketball.