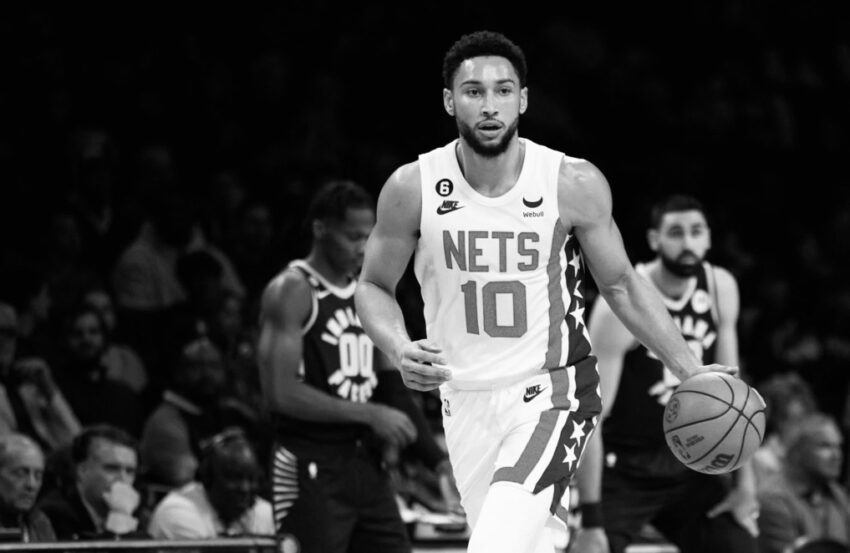 The Brooklyn Nets started the season off at 11th seed in the east, with a losing record of 4-7.  With all going on in the Nets franchise right now, Ben Simmons is not to blame.  Ben Simmons is averaging 5.6 points, 6 rebounds, and 6.6 assists.  He has also been efficient on the court while shooting 43% from the field in 29 minutes.  He has only played seven games, but the Nets are definitely going to turn things around with a big help from Ben Simmons.

When asking the question, what should the nets do with Ben Simmons? You have to take in all that Ben has as a player.  Ben Simmons is 6’10, 240 pounds, who can guard the 1 and 5, has great speed and athleticism, and great defense.  He gives the Brooklyn Nets the ability to push tempo and run in the fast break. Without Kyrie Irving on the court, Kevin Durant is the obvious biggest threat for the Nets.  Ben Simmons being able to push tempo makes it harder for other teams to get into their rotations and find those preferred matchups for Kevin Durant.  Ben Simmons can also play both sides in the pick and roll, being the screener or the roller.  The Brooklyn Nets have utilized his athleticism and positioned him in dunk spots on Kevin Durant isolation plays.

This gives defenses less help on the weak side with the way Ben Simmons can finish at the rim.  The Brooklyn Nets lacked a strong forward who could guard the other teams’ best forward.  With Ben Simmons on the court, the Brooklyn Nets have someone guarding guys like Giannis Antetokounmpo, Paul George, Lebron James and much more.

As many assets Ben Simmons has, like every play, he also has his flaws. The one big concern with Ben Simmons is his lack of confidence in his shooting ability. The fear of attempting a jump shot has defenders playing completely off him. This takes away spacing for scores and allows extra help for defenses.

The Brooklyn Nets started the season off without Seth Curry and Joe Harris in the lineup.  Putting Ben Simmons around the best two shooters on the Brooklyn Nets and Kevin Durant, you are sure to see progress.  The Brooklyn Nets should go to more screens with Ben Simmons handling the ball.  This will create more mismatches for their scorers and even himself.  He needs to get more in low post isolations with these switches. He will not be a threat outside the perimeter, then you have to use his skills inside.

Ben Simmons has gone to that running hook shot quite a few times this year and should add in some post fadeaways. He was seen working on his jump shot this offseason, and just need to have the confidence to use it.  Ben Simmons is surrounded by great offensive players, main ones being Kevin Durant and Kyrie Irving when he returns.  When you take in consideration of the double teams and traps these players get, they are going to need Ben to be more aggressive to take pressure off them if they want to make a run in this year’s playoffs.

With most teams playing in drop coverage and leaving Ben Simmons uncovered, the Brooklyn Nets should go to more screens with Seth Curry and Cam Thomas. Having Ben Simmons screen for Kevin Durant makes it easier to double and get it out of his hands early. When you put the ball in someone else is hands who can score like Cam Thomas and Seth Cutry, it makes defenses have to hedge or switch matchups to discourage the drop coverage.

With all this being said, the matter of fact is that Ben Simmons need to be more aggressive. Having all these skill sets and then putting a disability on yourself is crippling.  Ben Simmons career average is 15.9 points, and this season it is down to 5.6.  The difference is his confidence. Maybe playing in New York is something he can’t handle. Maybe playing alongside hall of famers is too much for him. As true fans of the sport, we understand that Ben Simmons is a gem, but when he limits himself, the question starts to become: does he understand he’s a gem? As the season continues and the Brooklyn Nets find their niche, I am a firm believer that Ben Simmons will play a big role in that!