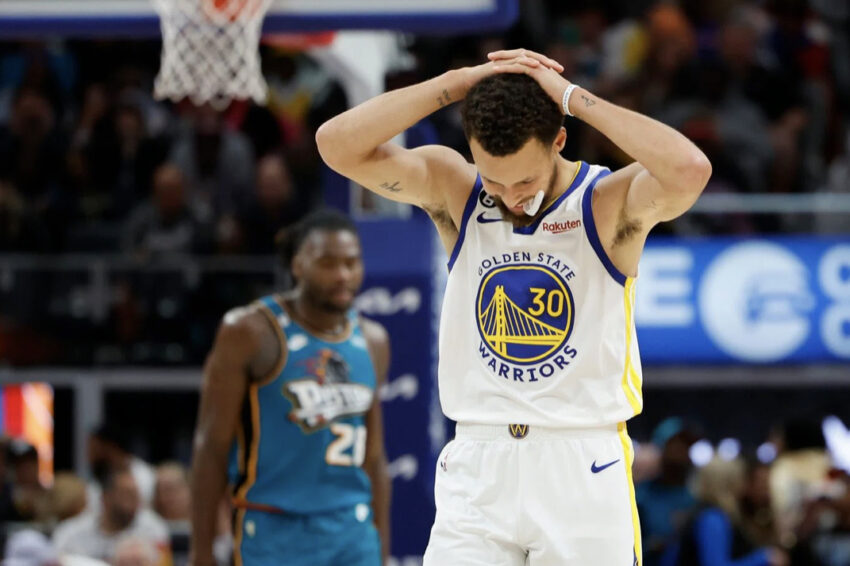 The Warriors made history to begin the season, but not in the way they had hoped, becoming the first team in NBA history to start 0-6 on the road after winning the championship the previous year.

Basketball fans would assume that the 2022 NBA Champions would continue their winning ways with a similar roster and outstanding play from their star player Steph Curry, but the Warriors are currently a shockingly,  bottom-three team in the west with a measly 4-7 record.

After going on a 5 game losing streak, the Warriors won their first game in 10 days with  Steph Curry putting up absurd numbers of a season high 47 points, 8 rebounds, 8 assists, and zero turnovers against the Sacramento Kings that made him the first player to put up these numbers since Larry Bird in March of 1990.

Last year’s Champs have looked like a shell of their last year team, and we could be looking at the end to one of the best NBA dynasty teams of all time.

Draymond Green, who is notorious for causing problems but always finds a way to make up for his bad boy behavior (Poole practice punch) by his play on the court, looks like a corpse of his former self. This All-NBA defensive genius who was amazing at distributing and in the pick and roll looks sluggish and is  averaging an all-time low in rebounds, assists, blocks, and steals. Green has dealt with defensive struggles in the past, but this time the age and athleticism looks like it’s catching up with him and with him already being an offensive liability, the triple single machine doesn’t look like he’s gonna get that big money deal in the offseason he expects.

The other star on this team, Klay Thompson, does not help with Draymond’s struggles. With two season ending injuries in 2019 and 2020 Thompson returned last year slowly, but found  himself in the postseason putting up 20 ppg and showing the world that Klay Thompson was back. This season, the 43 million dollar 32 year old who is considered one of the best 3 point shooters of all time, is shooting 32% for 3 point range off 3-10 attempts per game, which is 9% lower than his career average. A former all defensive player, who has had 2 major injuries looks like he’s on the way into the back 9 into his career.

Young players like James Wiseman need to step up for this team to succeed, but the 7 foot lefty who it always feels like is on the trade block or is about to take the next step… can’t find his way into the rotation, averaging 13 minutes per game so far. In his time on the court, he has shown flashes of being that impact center who can run the floor, but injuries have slowed the stud from Nashville down in his early career.

These could be overreactions and my guess is that Steph Curry and the former champions will turn it around to make the playoffs, and dare I say win another championship, but right now this looks like one of the most expensive messes of all time.

The Golden State Warriors have the most expensive payroll in NBA history with a staggering 202 million dollars in total cap, which is 78 million dollars over the Cap minimum and 50 million of the Luxury Tax Threshold.

With the Warriors winning the 2021-22 title, and generating more than $800 million in total revenue, an NBA record, It was an easy decision for owners Joe Lacob and Peter Guber to do whatever it takes to get the same team to run it back, even if this meant spending around 704 million in total contract value for their starting 5 alone.

There offseason re-signings of rising superstar Jordan Poole (4 year/128 Million), and 2021All Star starter Andrew Wiggins (5 year/ 147 Million) were supposed to solidify this team around the backbones of their team Klay, Steph, and Draymond, but the only player who looks like a backbone is Steph.

The short answer is no, you can spend all the money you want, but your chances are no better than those of a team with a bottom 50% payroll, who has won more championships in the 2000’s (4) than the #1 payroll has (3).

With a talented, star studded league, and the west feeling deeper than it has felt in a long time, it looks like the start to the end of an era.