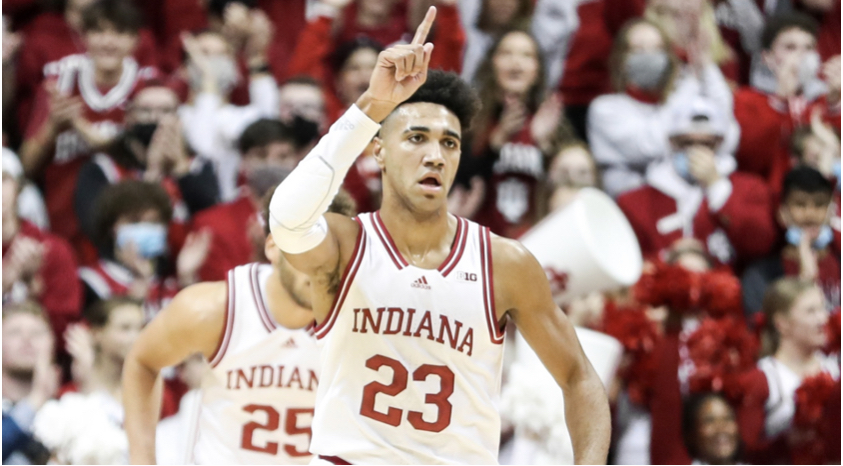 College basketball is unique in that a single player can change the culture and leave behind a legacy all of its fans will never forget. This is the case for Indiana Hoosiers senior Trayce Jackson-Davis, who is a Big Ten Player of the Year candidate.

Trayce Jackson-Davis’s fourth and final season with the Indiana Hoosiers is about to begin. For Indiana, this is not something they were expecting, but they are ecstatic. For other teams, players, and coaches? They are shaking in their jerseys knowing the NBA-ready star will be returning to leave his mark on the program and college basketball history.

Indiana basketball has produced greatness before, and the hallmark players have made a huge impact on the program and culture. Just to name a few: Don Schlundt helped Indiana to win its second national championship in 1953. Calbert Cheaney led the program to a 105–27 record, led his team to the NCAA Tournament all four years, and even a Final Four appearance in 1992. Isiah Thomas played only 2 seasons with the Hoosiers but left his mark after taking IU to win a national championship in 1981.

TJD is on his way to solidifying his legacy amongst these notable athletes, but one thing might be missing.

The Center Grove High School alumni made a huge splash during his freshman year with the Hoosiers. Jackson-Davisfinished second in the league in field goal percentage (56.6%), seventh in blocked shots (1.9), and rebounds (8.4). This electric year set the tone for what the future of the program would expect out of the young star. With Jackson-Davis’s help, the team almost qualified for the NCAA championship in 2020. Unfortunately, it was canceled due to Covid that year, leaving the Hoosiers hungry for redemption.

During his sophomore year, Trayce Jackson-Davis returned with vengeance. After starting in all 27 games, TJD finished the season as fourth in the Big Ten in scoring (19.1), second in rebounding (9.0), and third, in minutes played (34.2). While he continued to shine as the Hoosier’s best player, it still was not enough to deliver the wins they needed. Although he was still a young player at the time, Jackson-Davis carried the responsibility heavily as he knew the team was capable of more.

It was obvious Trayce-Jackson Davis was frustrated after this season. There was speculation about him entering the transfer portal or NBA draft after head coach Archie Miller was fired from the program.

Then came head coach Mike Woodson. A former Hoosier legend, IU fans were excited to see what the program could do with him leading the squad. Woodson was no stranger to wins, as he managed to collect 2,061 points over four seasons at IU (fifth in school history) and led the 1979 team to the NIT title. Woodson played a vital role in convincing Trayce Jackson-Davis to stay with the team. Woodson was confident that he and TJD both needed each other to bring success to the program.

Woodson wanted to help Jackson-Davis elevate his gameplay, and that is exactly what he did. During TJD’s Junior year with the Hoosiers, the court opened up even more opportunities than ever before. Trayce had already proved his greatness with the team, but he was finally given the reigns under Coach Woodson to take his game to the next level.

Jackson-Davis was proficient in analyzing the court and roaming around it the way he saw it to be the most beneficial. This allowed him to be more of a threat where necessary, moving freely and blocking shots consistently. Woodson encouraged TJD to keep expanding his offensive game. Without putting a cap on his ability, TJD shined brighter than ever before. He was unstoppable.

That year the Hoosiers finished the season 21-14 overall, ending its losing streaks to Purdue, Michigan, and Illinois. Even more impressive was advancing to the semifinals of the Big Tentournament, which they have not done since 2013. The Hoosiers were even more excited to hear their name be called on Selection Sunday for the first time since 2016.

Under Woodson, the team was able to capitalize on more opportunities. This was TJD’s best season yet. The team captain finished sixth in Big Ten in Scoring (18.3), sixth in rebounds (8.1), fourth in FG percentage (58.9%), and second in Big Ten in blocks (81). A monumental year, worthy of making the record books for Indiana University’s basketball program.

After such a successful year, Trayce Jackson-Davis was ready to leave on a high note and enter the NBA draft. Unfortunately, he tested positive for Covid and was unable to attend the NBA combine. Although it was disappointing, Trayce had to figure out his next move. TJD switched gears and redirected his attention back to the Hoosiers. If he was going to spend another year with IU, he was going to make it worth it.

The support and encouragement for Trayce Jackson-Davis from the Hoosier fanbase can be felt all across Indiana and the Nation. Fans are more confident in the team than ever, with big man TJD leading the way during his fourth and final year at Indiana University.

The season is finally here, and Trayce Jackson-Davis is ready to bring the heat.

Indiana played their first regular season game against Morehead State on November 7th. Both teams came out strong, hitting points from either side. IU pulled ahead with the lead, but MSU clawed their way back up halfway through the first half. Almost effortlessly the young Hoosiers synced up and regained momentum. By the second half, IU had locked down the Eagles and dominated the scoreboard. It was a balanced effort from all players, with six Hoosiers having eight or more points apiece. Indiana finished with an 88-53 win over Morehead State.

Overall, TrayceJackson-Davis looked solid. However, his thumb injury restricted him in terms of minutes and shooting ability. He mostly dribbled with his left hand and avoided using the injured thumb around the rim and the boards. Although he seemed frustrated to have his hand wrapped so heavily, TJD’s gusto and hustle were anything but lacking. By leading the floor and opening the court with an explosive but controlled pace, Jackson-Davis managed to grab seven boards and 15 points.

Looking forward, the Hoosiers have a few things to clean up, especially free throws, rebounds, and retaining momentum for afull 40-minute game. While the Hoosiers were able to keep their high preseason ranking, they will need Trayce Jackson-Davis as healthy as possible come time for conference games.

That being said, it might be a good idea to give the younger Hoosiers more minutes and experience during the beginning of the season, while the competition is less risky. Sources confirm TJD’s thumb is not broken, but he could use this time to rest and heal. Indiana will need Trayce Jackson-Davis in good shape to bulldoze the competition this season.