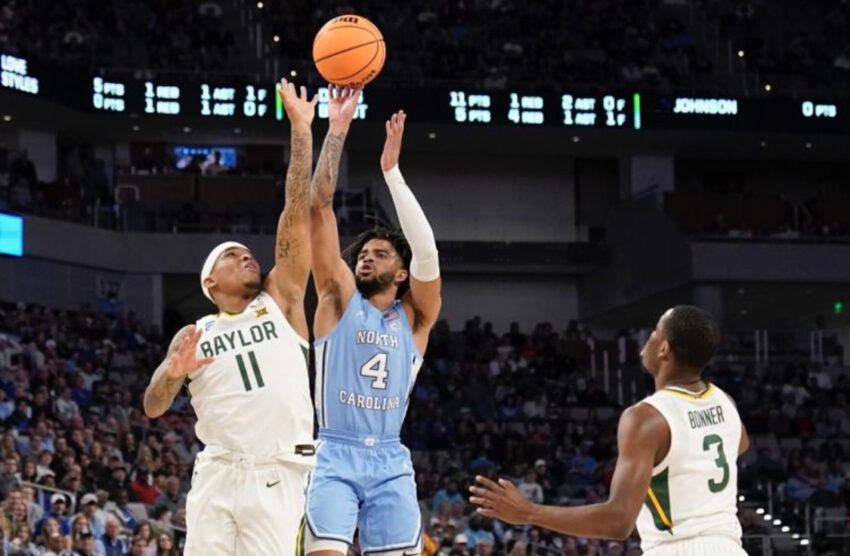 North Carolina hanged on to beat top-seeded Baylor in overtime to win 93-86 and dethrone the NCAA Champions. The Tarheels led Baylor by 25 points with approximately ten minutes to go in the game. They led by 13 point at halftime in which they build on it early in the second half. Brady Manek score 13 points within a three minute span to give the Tar Heels their biggest lead of the game.

However in the second half, Manek was ejected after being whistled for a flagrant foul in which it was an elbow to Baylor’s Jeremy Sochan. Baylor rattled off an 11-0 run and Caleb Love fouled out with 6:15 remaining. Baylor cut the lead down to single digits with 5:22 to go in the game.

Hi Baylor pull it into three with 1:48 left in regulation.

Armando Bacot was able to score and draw a foul to put UNC back up by five with 1:37 to go, and he added a free throw to put the Tar Heels up by six. Bacot missed two free throws and Akinjo converted a three point play with 16.7 to tie the game and North Carolina fail to score on the final possession in regulation which send the game into overtime.

In overtime North Carolina scored the first four points and Baylor tied it on a layup by Sochan with 3:02. After that North Carolina was able to pull it away and seal the deal to end Baylor chances of winning.

R.J. Davis led all scorers with 30 points, including arguably the game-deciding three point play in the overtime. Brady Manek ended up with 26 points before his ejection and Armando had 15 points and 16 rebounds. Adam Flagler led the Bears with 27 points.

Northern Carolina survived this game with 21 turnovers in which 16 of them came into the second half and overtime. UNC advances to the East Region’s Sweet 16 next weekend in Philadelphia. The Tar Heels will play the winner of No. 4 seed UCLA and No. 5 seed St. Mary’s on Friday night.