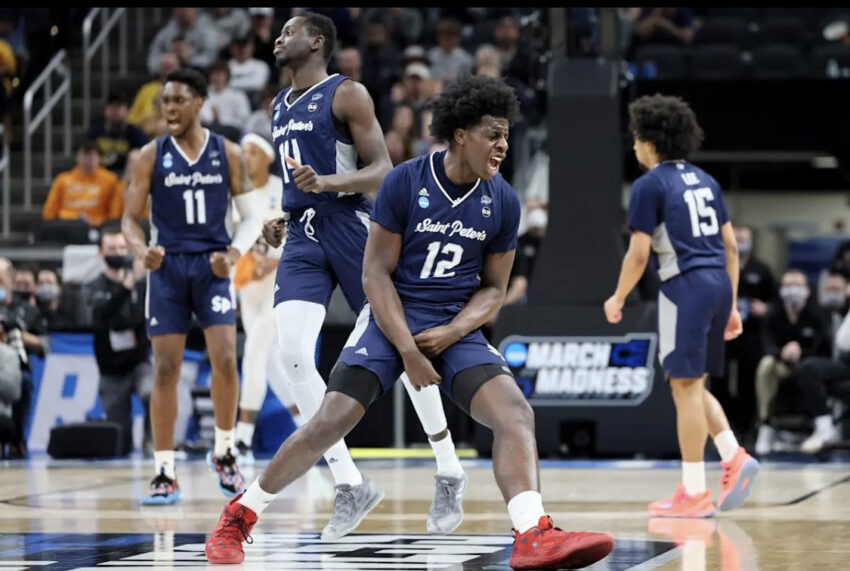 The St Peter’s Peacocks Cinderella run continues as they beat the Murray State Racers 70-60 in Saturday’s second round. The Peacocks ended Murray State 21 game winning streak and advance to the Sweet 16 to take on the winner of today’s Texas vs Purdue matchup.

The Peacocks never trailed the Racers in the second-round showdown. St. Peter’s grabbed a 22-21 advantage on a KC Ndefo free throw at the 5:23 mark of the first half, and the Peacocks wouldn’t relinquish that lead the rest of the way. St. Peter’s stretched its lead to as many as 13, but Murray State made several runs to cut into Saint Peter’s lead and made it a 59-57 game with just over four minutes remaining.

Just as the Peacocks did all second half, St.  Peter’s had an answer. Doug Edert responded with a three pointer and a layup on consecutive possessions to push St. Peter’s lead to seven and held on to the victory. Ndefo led the way for St. Peter’s with a dominant two-way effort by racking up 17 points, 10 rebounds and six blocks. Edert scored 13 points off the bench to help with the victory.

St. Peter’s is the third 15th seeded team to follow Florida Gulf Coast (2013) and Oral Roberts (2021) into the history books. Also, it will be the first Sweet Sixteen appearance in school history. The Peacocks are also the first team from the Metro Atlantic Athletic Conference to advance to the Sweet 16.