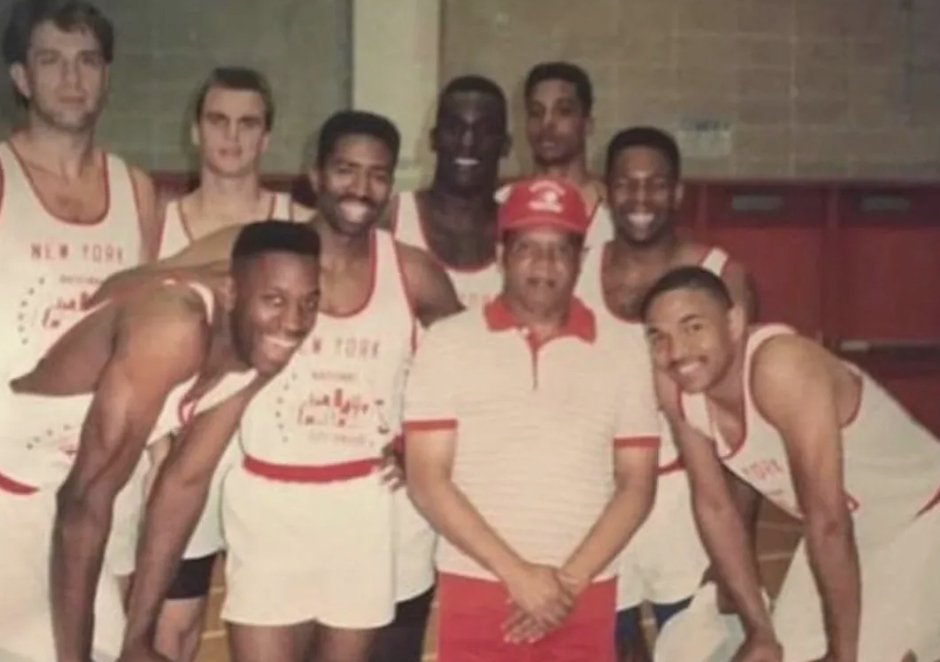 Back in 1983 I went to IS 227 and Lost Battalion Hall in Queens New York where the NBA Pro Am began with Mr Cecil K Watkins starting it up. At that time Mr Watkins was the supervisor of basketball officials for the NBA. It was a springboard for people who want to become a NBA Referee. At that time the league was playing at Springfield Gardens HS and Hempstead High School in Long Island.

With me being a teenager at that time and it was far to give the guys a helping hand. It all started back in 1985 when I was up at PS 127 formerly the site of the Ray Felix Tournament in East Elmhurst New York in my neck of the woods.

Derek Pinnock who was on the Board and Treasurer of Pro Am ask me to come and give them a hand at the NBA Pro Am All Star game which was a Harlem Week event at City College for two days. I assisted Cecil Watkins and Steve Martin a former star at Georgetown who at the time worked for the NBA. That weekend got to see Kenny Patterson, Ed Pickney, Ken Bannister, and a few NBA players. On that Sunday in August 1985 Patrick Ewing who was the newest member of the New York Knicks and John Thompson came by to watch the games.

By then I got the pleasure to be a part of the Pro Am for many years experiencing the cold days at Roberto Clement State Park, Brandies HS, and IS 227. Also experienced the summers at City College, Columbia, Riverbank, and the Gauchos gym.

Here is the players and coaches who became legends of the Pro-Am League:

Jim Couch – Coach of Dyckman who became a mentor of the youth and shown concern about their education as well. His son Sean who became a player in the Pro-Am and was a star at Columbia in which he graduated in 1987. He was drafted by the Indiana Pacers in the third round. He also had coach some of the best NBA players in the Pro-Am League with the likes of Mark Jackson, Kenny Smith, Rodney McCray, Felipe Lopez, Conrad McCrae, and Lloyd Daniels.

Mark Jackson – Pro Am was the place for him to get him prepare for his upcoming rookie season in 1987. It paid off for him by winning NBA Rookie of Year in 1988. Then the next year he became an All Star. He will continue to play every summer staying in shape.

Chris Mullin – Mullin spend a few seasons playing in the Pro-Am in which he will average over 30 points per game.

Rod Strickland – Rod was a crowd favorite at City College and had rivalries with Mark Jackson for who’s the best Point Guard in New York city at the time.

Anthony Mason – Mase will come play every Summer for Primetime. He will give 20 points per game and his inside presence have always become a key factor.

Kenny “The Jet” Smith – Smith played with Mark Jackson on the Dyckman team. Smith will become a factor in helping Dyckman have one of the best team in the Pro-Am.

Steve Burtt – Yes he was one of the best to play in the Pro Am during the Summer and Winter league. Burtt was drafted by the Golden State Warriors, played in the NBA for the Phoenix Suns, Los Angeles Clippers, and Washington Bullets.

James Ryans – Coach the Primetime team and they were one of the best in the Pro-Am for numerous seasons. His talent consists of Anthony Mason, James “Speedy” Williams, and other talented players on his team.

Mario Ellie – Mario had good summers and played in the Pro-Am before breaking through in the league. He played with Harlem USA, Primetime, and other Pro Am teams at CCNY.

Tony Hargraves – Tony was a long time Pro-Am player and became a standout. He will give you 20 points per game at times.

Ed Pickney – Ed was a loyal Courtsmen AA who played for Ted Jones in the Pro-Am during the off-season.

Sam Worthen – Another Pro-Am legend who played several seasons during the Winter and Summer seasons. Also a former NBA player with the Chicago Bulls and Utah Jazz.

Ted Jones – I have say a Pro-Am coaching legend. He coach the Courtsmen to numerous Pro-Am championships back in the 80’s. His team was stack up with Charlie Criss, Jim Bostic, Ed Pickney, Trent Tate, Ed and Ron Duncan, Kurt Joseph, Michael Thompson, Sam Worthen, and other star players.

Sid Jones – Another coaching legend from United Brooklyn, which assemble some outstanding teams. Sid was one of the nicest guys on the sidelines and his players gave him the upmost respect. Some of his players were Seth Marshall, Lloyd Daniels, Carey Scurry, Bettle Washington, and George Johnson.

Elmer Anderson –  Another sensational player who put up big numbers in the Pro Am league in the Summer and Winter time. He was a part of the Pro Am team that played in the National Championships nationwide.

St. John’s Alumni – I have to show love for the Redmen (now Redstorm). The Pro-Am produced some of the best players who participated is Felipe Lopez, Shelton Jones, Zendon Hamilton, Lamont Middleton, George Johnson, Billy Singleton, and Ralph Menar who coach the Sweeny team in the Pro-Am.

Felipe Lopez – Played for Dyckman back in 1994 before he step on the court at St John’s. Felipe had the fan base at the Gauchos gym rocking in which he was averaging over 25 ppg. He became a standout in the Pro-Am for a few seasons.

Bill Motley – Coach for Harlem USA was loaded with talent. They were led by Anthony Rogers who averaged 30 points per game a few summers at City College. Mario Ellie became a factor on Harlem USA as well. Also David Maxwell, Sam Worthen, Mike Henderson, and other players who was on his squad.

Floyd Lane – Coach different teams and had a talented group of players from CCNY in which he coach at. Gus Williams and other NBA players played for coach Lane.

George Johnson – An outstanding player at St John’s and played for different teams back in the 80’s and 90’s. Johnson played in the NBA for the Indiana Pacers.

I will like to thank Mr Watkins RIP, Doc Lustig RIP, and also Jesse Williams for giving me to the opportunity to have fond memories of the Pro-Am League. I enjoyed the journey for ten years.