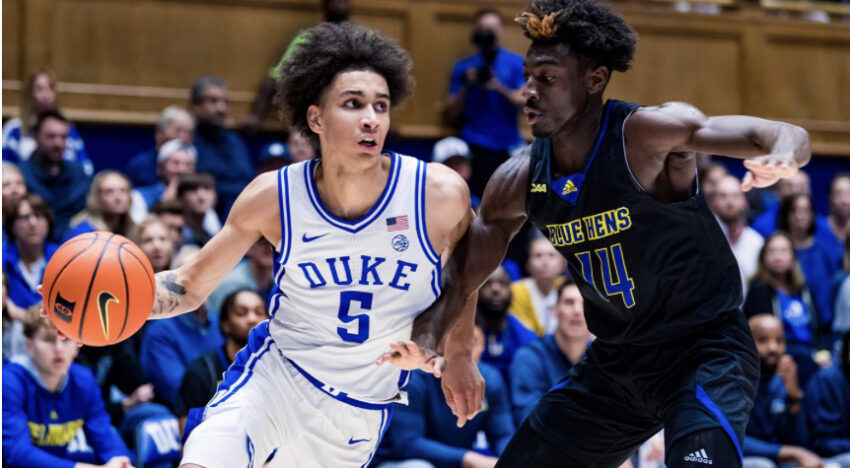 Tyrese Proctor is a five-star guard who left his high school on the other side of the world early to join Duke as a young freshman for the 2022-23 season. Proctor chose to be a Blue Devil over Arizona, Arizona State, Oklahoma, and Tennessee offers. The Sydney native is just one of three Blue Devils from Australia, the others being Jack White (2016-20) and Kyrie Irving (2010).

Freshman year is tough for any student, but it especially can weigh heavy on one who is enrolling a year early and moving across the world. Proctor is wise beyond his years in the way he can regulate himself and manage these stressors to minimize any distractions getting in the way of performing at his best for Duke basketball. Proctor says, “I try not to get too into my emotions. Being a leader on the floor, you’ve gotta do that, hold everyone accountable and just play your game.”

Proctor is a quick, agile guard who drives to the basket and distributes the ball to his teammates. He also has a strong shooting touch and is capable of scoring from beyond the arc. Proctor is a smart athlete, anticipating the competition’s movements and staying one step ahead of the next play.

Although we are still in the early stages of the 2022-23 season, Proctor has already begun making an impact on the Blue Devil’s roster.  Despite being a young freshman, the combo guard has quickly earned a spot in Duke’s starting lineup. Proctor has played a key role in the team’s early success, averaging 9.7 points, 3.4 assists, 2.3 rebounds, and 26.7 minutes per game.

Tyrese Proctor is dedicated to improving his craft, which makes his potential for success even greater. Off the court, Proctor is known for spending countless hours in the gym working on his skills and revamping his game. In addition to his athleticism, Proctor is also a standout student. The elite freshman is already making a name for himself, and his bright future on and off the court is inevitable.

Duke head coach Jon Scheyer is impressed with Proctor’s performance so far. “The thing with him, he’s really smart. He’s really unselfish. And the next step is just taking what he knows and talking more. I want him to talk more and to use his voice because he sees things that others don’t or can’t.”

If Proctor can remain consistent throughout the season, he will be a strong candidate to level up in his basketball career, whether in the NBA or overseas. As the Blue Devils compete as one of the top college basketball programs in the United States they will look to Tyrese Proctor to bring fresh freshman energy to the court. With his talent and determination, there is no doubt Proctor will play a vital role in Duke’s success this season.

Overall, Tyrese Proctor is a young and talented basketball player reigning from Australia who is poised for a bright future in the United States. Whether he stays at Duke for all four years or decides to turn professional, it is clear he has the potential to make a big impact on the court.