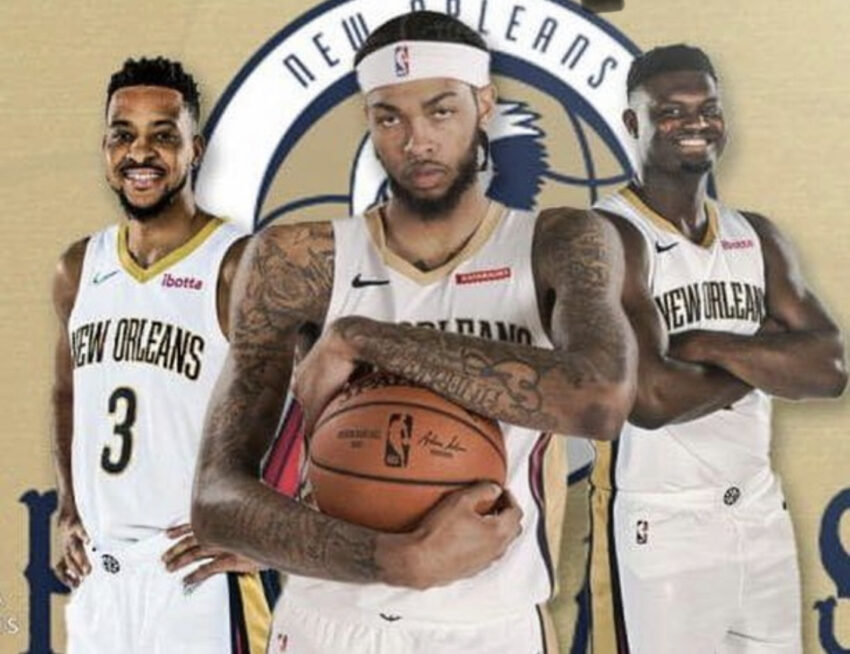 From an easy Western Conference push-over team, to having the seventh best offensive rating in the league, the New Orleans Pelicans. Currently the Phoenix Suns sit at the top with an offensive rating of 117.6 and the Dallas Mavericks arestanding at second with 117.5. A team that barely made the playoffs, finishing 10 games below .500, are now on their way to looking like a contender for the NBA title.

​The beginning of this transformation for this team can be said that it happened once the trade of Anthony Davis to the Lakers occurred. This gave New Orleans a young core of Lonzo Ball, Josh Hart, Brandon Ingram, and unprotected first-round picks. Ultimately this young team didn’t advance past the regular season, instead, gave the organization a solid starting point to rebuild and develop the players they obtained. They would then have the No. 1 pick in the 2019 draft, selecting top prospect Zion Williamson. He was the franchise player that the Pelicans needed to start building around.

​Over the seasons, the Pelicans still were a lower par team, however, key players like Brandon Ingram, Josh Hart, and Lonzo Ball, kept getting better–developing more into their own player by offering different attributes on the floor. Zion, after a three-month recovery for a torn meniscus in this right knee,showing that he’s a dominate force right away, securing the validation that picking him at No. 1 was not a mistake. Unfortunately for New Orleans, Zion would deal with many injuries within his first two seasons, making him sidelined for most of those games. After the 2020-21 season, he suffered a Jones fracture in his right foot that made him sit out for the 2021-22 season. All while the team was dealing Zion being in-and-out of games, the organization still made moves that felt necessary.

​On November 2020, New Orleans acquired Oklahoma City Thunder’s center, Steven Adams. The 7-foot center helped with defense inside the paint and rebounding on both ends of the floor. Prior to the trade, the Pelicans had a strong suit in rebounding, but having Adams only made that better. In the previous season, they were ranked second in offensive rebounding and tenth in defensive. By the end of the 2020-21 season, New Orleans was first in offensive rebounding and third in defensive. That’s not the only changed the Pelicans experienced during that year. Lonzo Ball is known to be one of the better playmaking points guards in the league but did not fit well in the role New Orleans assigned him. They wanted Ball to play as a 3&D guard since he is very big for his position and can shoot the long ball. It didn’t mesh well with 6’6 point guard since his primary playstyle is playmaking. In the summer of 2021, Ball signed a deal to the Chicago Bulls, joining one of the top small forwards in the league, DeMar DeRozen–who also signed a deal with the Bulls that summer.

Later, the Pelicans ended up trading their center Steven Adams to Memphis for Jonas Valenciunas. The big man can rebound just as good as Adams; however, he gives the Pelicans the ability to stretch the floor with his shooting. There was also an addition of a rookie joining the team, drafted No. 35 during the same summer, Herbert Jones. The roster was still not enough to be competitive, especially for the Western Conference. Now having a couple pieces added to the roster, there was still a void at the point guard position since Ball left.

​With the Pelicans still out of their franchise player, Zion Williamson, for the 2021-22 season, success in winning games has stayed at an inconsistent basis. Shooting guard Brandon Ingram has become the number one option in their offense for majority of Zion’s absence, showing big leaps in improvement. Another Key player that has improved for New Orleans is Josh Hart. His ability to locate and grab defensive rebounds as a 6’5 guard has made him one of the better rebounding guards in the league.

The Pelicans knew they were missing a spot in the point guard position and saw Josh Hart’s value increase as he became a notable player for them. On February 8th, the Pelicans completed a trade that involved giving Josh Hart, Nickeil Alexander-Walker, Tomás Satoransky, Didi Louzada, a protected 2022 first-round pick, the better of New Orleans’ and Portland’s 2026 second-round draft picks and New Orleans’ 2027 second-round draft pick in exchange for C.J. McCullum, Larry Nance Jr. and Tony Snell.

​The duo in Portland of Lillard and McCullum was due for separation. They both complimented each other’s game, but it wasn’t enough to make the Blazers strong contenders. While having the two in Portland, no major roster moves were made that can help the leadership of Lillard and McCullum to a finals appearance. Lillard has expressed that he wants to stay in Portland for the entirety of his career with the hopes of winning a title. Making this trade with New Orleans leads to believe that Portland is trying to rebuild around Lillard by taking the picks and players. Lillard was in-and-out of the lineup, then eventually sat out of the season due to a lingering abdominal injury. With a subpar roster and Lillard out for the season, Portland looked like a team that will be going through the rebuild process in seasons to come.

​Moving McCullum to New Orleans and filling that point guard role is what the Pelicans needed. McCullum played 30 games for the Pelicans, having a record of 17-14 averaging 24.3 points, 5.8 assists, and 4.5 rebounds. In the 30 games he played with Portland that season, he averaged 20.5 points, 4.5 assists, and 4.3 rebounds–which are some obvious signs that New Orleans is a team where he can strive at. The help of McCullum pushed the Pelicans into the play-in tournament as the 10th seed, resulting in versing the Phoenix Suns in first round of the playoffs. The Suns would go on and win the series 4-2, however, the Pelicans taking two games displayed how competitive that team can become once they get their star player back.

​New Orleans look like a completely different team than once the 2021-22 season was over. Acquiring McCullum takes the playmaking burden off Ingram, where he can put more focus on being a scoring threat for defenses. McCullum’s creative ability to score off the dribble adds another reason to how he impacts the game offensively for the Pelicans. He won’t help them much on the other end of the floor, McCullum has never been known for his defense, so there wasn’t any improvement there for the team. His playstyle of creating on both scoring and playmaking made scoring opportunities for players like Ingram and Valenciunas much easier than what they’ve experienced prior to the trade.

​Coming into the 2022-23 season, the Pelicans are a team to keep an eye on since Zion Williamson is back in the lineup. So far eight games in, they have a record of 5-3–landing at the 5thseed. It doesn’t seem like it will take much time for the Pelicansto find the chemistry that works well for Williamson to fit into, he has played in six games out of the eight, picking up where he left off averaging 21.7 points, 3.7 assists, and 6.7 rebounds per. Coming off a foot injury, Williamson will most likely receive load management in the front-half of the season until they feel comfortable letting him play without restrictions.

​The offensive ability is now there for the Pelicans, no doubt, but not the same can be end on the other end of the floor. Last season, New Orleans was ranked 25th in opponent shooting percentage, averaging at 47.3%. This season, not much as changed towards making their opponent work for shots, allowing 46.6% of opponent shooting percentage at the 17th spot. Other than players like Herbert Jones and Jose Alvarado, there are not many on the roster that are stellar defenders. Right now,they are eleventh in allowed opponent points, allowing 111.6 points per game. It isn’t either the best or worst, but if they want to be legit contenders, being eleventh in the league in allowed points is going to have to be the highest the Pelicans can get.

​This season can be a turning point for the Pelicansafter many long and disappointing ones. Failing to plan around Anthony Davis and the complications they had towards the end of his leave, trading him for the assets they’ve acquired was the best move they made of that situation for the long term. Yes, it got the Lakers a championship right away, but now they are going through complete turmoil, meanwhile the Pelicans have solid pieces, found a young star in Brandon Ingram, and drafted a franchise player. This team, if stay healthy, is a top six seed team in the western conference with good finals appearance odds. This team can possibly be a competitive one for seasons to come if they continue the path they paved for themselves back in 2019. Don’t be surprised, once the seasons progresses, when you see the Pelicans playing for a top seed in the west.

1 thought on “Leaving the Nest: The New Orleans that Pelicans Seeking for a Title  ”