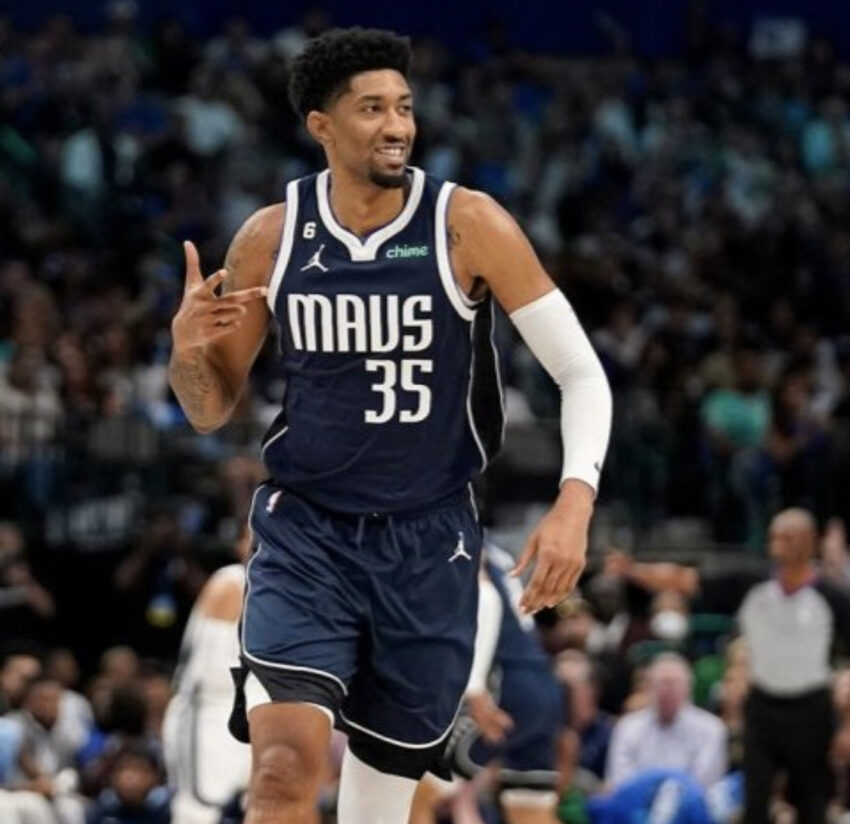 In the 2022 offseason, the Mavericks had 2 big picks to combat the loss of their big man. The Mavericks picked up center JaVale McGee from the Suns on a 3 year, 17.2 million dollar free agent contract. By acquiring Javale McGee the Mavericks were now able to introduce big man basketball. This may have been a good move for the Mavericks, however the most notable pick up for the Mavericks in the offseason has to be Christian Wood.

Christian Wood was acquired by the Mavericks from the Houston Rockets in exchange for 4 players whose contracts were about to expire. These players include Sterling Brown, Trey Burke, Marquese Chriss, and Boban Marjanovic. The Rockets also got the 26th draft pick. This may look like a lot of players for just one athlete however, The Mavericks not only received a big man in a time of desperation, but by securing Christian Wood the Mavericks were able to open up some space on their roster.
Christian Wood could be the piece that the Mavericks have been looking for. He is a 6’10 center/power forward, and he can knock down a 3 if he has too. This is very similar to the game Prozingis played with the Mavericks during his time in Dallas. In the 2020 season Porzingis averaged 20.1 pts, with a 37% three point percentage making him a huge part of the offense. Wood already looks to be a contender to fill the shoes of Porzingis.

JaVale Mcgee is a 7 foot 270 pound center who should bring fire to the team. McGee however is falling short averaging only 4.9 points compared to the 16.8 points that Christian Wood has had. Even Dwight Powell, another Center for the Mavericks, is averaging more points than JaVale Mcgee.
Another important detail when looking at Wood vs McGee is rebounds. Rebounds not only gives your team more opportunities to score, but it helps out with the defense as well, and this is where Mcgee falls short for the Mavericks. Mcgee is getting out rebounded by Wood, with only 3 rebounds per game to Wood’s 8 rebounds per game. Jason Kidd should make the switch and move McGee to the bench as Wood is proving to be a big component to the team alongside Luka. We may also see more minutes from Powell if he steps it up.
Looking at the centers the Mavericks have, it’s important to note Dwight Powell as well. Dwight Powell is a big component to the offense if he is doing well, however he struggles with inconsistency. For example this season, Dwight Powell has had 3 games that he hasn’t played in, 1 game with over 10 points, and the rest have ranged from 1 to 9 points. If the Mavericks can have one other player that can put up at least 15 points per game the Mavericks could be in really good shape to finish off the season.

In the past couple of years we have seen heavy reliance on Luka by the Mavericks, but with the addition of Christian Wood, Jason Kidd should be able to expand their playbook. Luka Doncic not only knows how to score, but he is a great passer as well. Luka Doncic is averaging 8.6 assists per game, which is almost 20 points solely on assists. With Luka’s assist game, and Wood’s ability to hit a 3 or finish at the rim, we may see a new duo spring out from the Mavericks between Wood and Doncic, as both of them pose a threat both on the outside and inside. Luka Doncic himself has acknowledged how good Christian Wood is commenting “He’s been great,” after their win over the Utah Jazz.

Projecting how a player will do in the season is really hard as there are many variables that will go into it. However, with Wood coming off the bench instead of being a starter we may see him win the 6th man of the year. That may be what Jason Kidd wants for Wood as the head coach, which would explain why he hasn’t made the switch with JaVale McGee.

Christian Wood is currently ranked third in the 6th man of the year award behind Golden States Jordan Poole, and behind the Miami Heat’s Tyler Herro. Tyler Herro is the reigning 6th man of the year, so it will be interesting to see if Wood can pass him. In just his 3rd season, Herro averaged 20.7 points, 5 rebounds, and 4 assists to win this award last year. Herro also had eight 30+ point games coming off the bench.

It’s hard to rate these players against each other as Poole is a Shooting guard, Herro is a Point Guard, and Christian Wood is a center/power forward. Wood is looking good for the run for 6th man of the year as both Herro and Poole have a lower player efficiency rating (PER) than Wood. Wood has a PER of 22.1, whereas Herro has a PER of 17.78, and Poole has a PER of 12.42. As the season goes on Wood will find his role as a Maverick, so the possibility of him winning the sixth man of the year should increase. The Mavericks made a great choice in securing Wood, and there’s a lot ahead in terms of Wood’s time with the Mavericks.