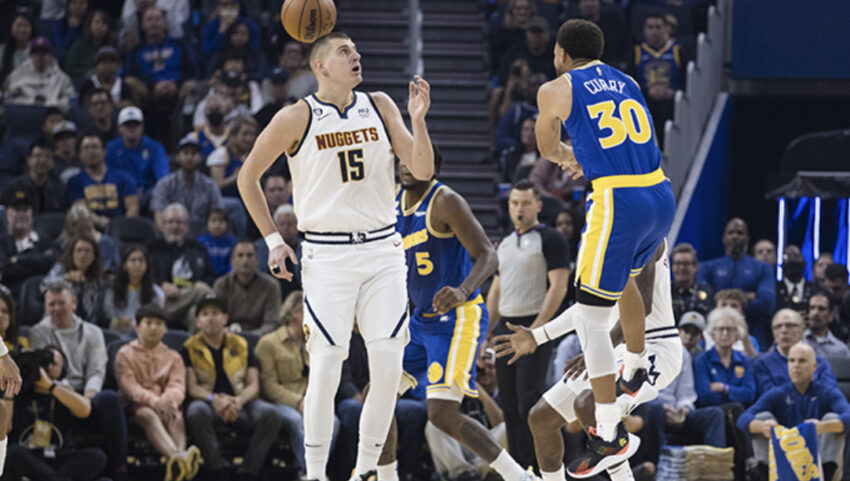 Nikola Jokic scored 26 points 10 rebounds, and 12 assist as part of a triple-double as the Denver Nuggets beat the defending champion Golden State Warriors 128-123. Stephen Curry put up a game-high 34 points for the Warriors.

The Nuggets made eight of their 14 3-point tries in the first half. Denver distanced itself early from Golden State, leading by as many as 20 points and 70-52 at the break.

Golden State clawed back within 124-123 on a layup by Jordan Poole with 14.7 seconds remaining. However, Jokic’s 10th assist got Bruce Brown a layup 1.7 seconds later, and the Nuggets survived a missed 3-point attempt by Klay Thompson with 9.3 seconds to go that could have tied it.

Starting in place of Jamal Murray, who was given the night off on the front half of a back-to-back, Brown contributed 20 points to the Denver win. Fellow starters Michael Porter Jr. (17), Kentavious Caldwell-Pope (17) and Aaron Gordon (10) also scored in double figures, as did reserves Bones Hyland (14) and Jeff Green (10).

The Nuggets finished at 53.5 percent from the field and equaled the Warriors at their preferred 3-point game, with each team making 15 despite Golden State taking 10 more attempts.

After a 1-for-5 first half from beyond the arc, Curry wound up 5-for-11 on 3-point attempts to account for almost half his point total.

Andrew Wiggins chipped in with 23 points and a team-high eight rebounds, while Thompson added 16 points. Draymond Green scored 13 to complement a team-high nine assists, and James Wiseman added 11 points off the bench.