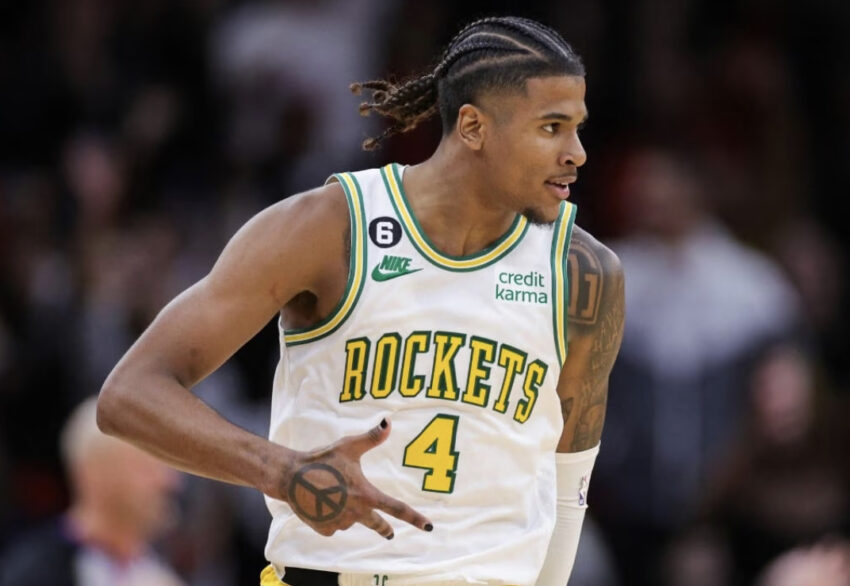 This week 8 in the NBA some young talents have stood out. Let’s go through the NBA Top 5 sophomores of the week with Jalen Green, Evan Mobley, Josh Giddy, Scottie Barnes, and Franz Wagner. All of those players had a huge impact on their team during this week’s games.

1. Jalen Green (Houston Rockets) – Jalen Green’s hot start has made the Houston Rockets one of the more entertaining teams in the NBA. Jalen Green made a 4 point difference in scoring going from averaging 17 to 21. Jalen’s athletic ability and length gives him an advantage attacking the rim. With improvement in his shot creation and ball handling, Jalen has shot the ball with extreme confidence this year taking some big shots. Besides gaining another year experience, Jalen Green put on 10 pounds of muscle over the offseason. This will be key in every offseason for him to continue to get stronger. This will help him get stronger to be able to guard the best shooting guards in the league. Being a high flyer the way Jalen Green is, you have to be able to absorb contact and embrace high falls. The young Houston Rockets are filled with other athletic guards who can play both ends of the floor. If they can stay together and remain healthy, this is a rebuilding franchise to keep an eye on!

2. Scottie Barnes (Toronto Raptors) – Scottie Barnes made his mark on the league early winning the rookie of the year award. Barnes was introduced to all the best forwards in the league early as the Toronto Raptors assigned him the role of guarding the best players on teams. He has advanced a lot more since his rookie year averaging 14 points per game,shooting an efficient 45%. Scottie likes to take his defenders deep in the paint and seal them for a low post entry. Once they get them down there, Scottie uses his strength and size to attack or force doubles where he can play make. Scottie’s unselfishness, hunger for improvement, competitive spirit, and potential to become a star player, makes him a valuable player to keep over the years.

3. Josh Giddy (Oklahoma City Thunder) – Josh Giddy has been a triple double machine since he entered the league. Missing a vital new pickup in Chet Holgren, Josh makes up for that presence in a huge way, Josh’s playmaking ability while being a threat on the scoring end is what makes him such an offensive weapon. While not being the Oklahoma City thunders go-to scorer, Josh has been still useful averaging 14 points per game. Without the ball, Josh finds a way to score with his excellent off ball movement. Knowing when to cut to the basket, and finding his bigs on drop downs and shooters in the corners as well. The young point forward will find himself a big role in the thunder rebuild as they make noise these next couple of years.

4. Evan Mobley (Cleveland Cavaliers) – Evan Mobley has not made the huge stat leaps coming into his sophomore year that the players in his class have made, but Evan Mobley is a promising big who has shown amazing talent and potential. A highly skilled 7 footer, great length and impeccable defensive abilities, big who can stretch the floor and knock down the three ball. Mobley has not impacted the successful Cavs this year, but with the new duo guards getting to learn how to manage the ball handling and loading score, Evan has been a big anchor on the defensive end. As Mobley finds his groove and gets himself asserted, he will be big if the Cavs want to make a run in this stacked Eastern Conference division.

5. Franz Wagner (Orlando Magic) – Franz Wagner has shown serious versatility taking on a huge point forward like role this year for the Orlando Magic. Wagner is averaging a hair under 20 points, and shooting an efficiency 49% for the struggling Magic. With the magic running a multiple guard lineup his often dribbling would come to a surprise. Wagner speed makes him a skilled three level scorer, with great size that can take over in big games and make big shots. Next thing to take Franz into the next level will be his ability to guard the top guards in the league and accept that role defensively.