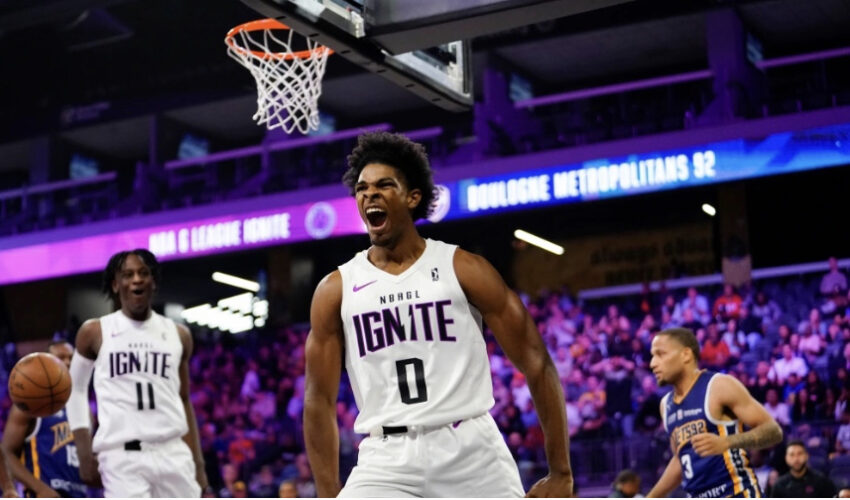 As the 2023 NBA draft nears all eyes are on the top picks, one of them being the 6’2” NBA G League Ignite point guard, Sterling “Scoot” Henderson.

The 18-year-old Atlanta native is averaging 21.2 points per game while shooting 48.5% from the field. He is also averaging 4.5 rebounds and 5.8 assists per game.

Henderson being a five star recruit in 2021 seems to be smack in the middle of the draft conversation and hype of who will be the number one overall pick for the 2023 NBA draft? Currently, he is in the running for the top spot along with 18-year-old star Victor Wembanyama.

Wembanyama is a 7’4” center for the Boulogne-Levallois French basketball organization and plays for the Metropolitans 92. Wembanyama is averaging a total of 22 points, 8.9 rebounds, 2.4 assists, and 3.1 blocks per game. With his size and athletic ability, Wembanyam has been rumored to be the lead prospect as the first pick in the 2023 NBA draft.

With that being said, recently the opportunity presented itself when Henderson and Wembanyam faced each other at The Dollar Loan Center in Henderson, Nevada. Henderson entered the competition having a point to establish that he was the better option for the number one spot. If Scoot Henderson would not have reclassified in 2021, the 2022 top pick would have been solidified by him.

However, it is this reclassification that has placed him in the predicament of having to pursue the number one spot going into the 2023 draft. This drew more than 200 scouts and executives gathered together to watch the gameplay from both of these elite prospects. ( What day)

In addition to the scouts and the executives gathering for this game in Nevada, there were prominent NBA stars, including Trevor Ariza, Chris Paul, Devin Booker, Damion Lee, and Duane Washington Jr., present for the game to preview the young prospects. Also in attendance courtside, WNBA’s MVP, A’Ja Wilson.

Admittedly, the majority of those in attendance believe that Wembanyama will be the first overall choice in the draft.

However, Henderson’s game play led the team with an overall 28 points. He also finished with nine assists, five rebounds in a 122-115 victory over Wembanyam. As well as, finishing the night with two steals as he went on to show he was an all around great player. Henderson played for a total of 31 minutes and with each sensational play he displayed his explosive playing skills on the court.

Wembanyama also had a stellar game as he ended with  a total of 37 points. Wembanyama also shot 7 of 11 three-point attempts which was impressive for a man of his stature and finishing with four rebounds and five rejections.

Though Wembanyama may be the favorite for the first pick in the draft, he has acknowledged the immense talent that Henderson presents during the postgame interview, “He is tough to guard, just what I expected. I think the biggest point of his game is his aggressiveness. Every time the ball is in his hands, it is even something you feel on the court, you know he can be so dangerous. He can slash, he can shoot the ball. I was surprised in a good way. He is a great player.”

While Henderson’s remarks during the post game interview seem to be that of a confident yet humble young man as he stated “I feel like I played pretty good. I still have areas of my game where I feel I need to get better and that’s not on the stat sheet. I feel like I had an all-around game today and tried to be a leader and stay vocal even when I was on the bench supporting my team.”

Scoot Henderson is currently projected as  the number two prospect based on the mock 2023 NBA draft. But it’s his competitive nature and ability to step up his game that has him eyeing the number one spot and having others reconsider him as the best prospect for the NBA’s top pick. Only time will tell who will earn the topmost prominent pick in 2023.