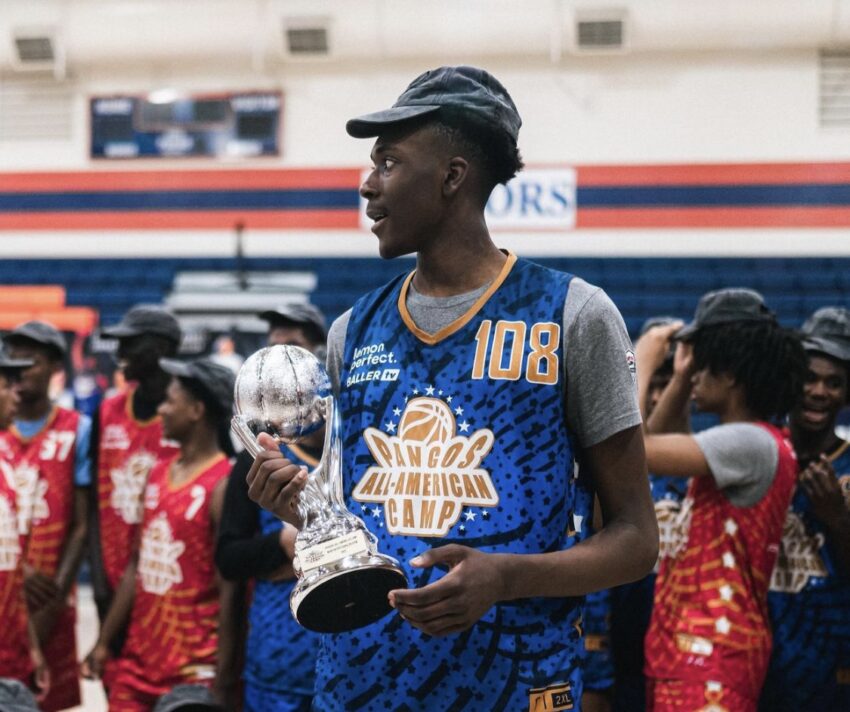 Pangos All-American camp was at Bishop Gorman (Las Vegas, Nev.) June 5-7. A lot of top prospects came out and some had some very good performances. With that Anthony Forrester, gives you his top 25 players from the camp.

1) Xavier Booker – 2023 – 6’11” – PF – Cathedral(IN): Xavier Booker has been rising up the rankings and he displayed that at Pangos All-American camp. Xavier showed his athleticism with some explosive dunks at the rim. Xavier has nice touch around the rim. With his frame at 6’10” Xavier made it tough around the rim challenging shots. Xavier hit shots from the outside and looks to be developing a consistent jumper.

2) Ian Jackson – 2024 – 6’6” – SG – Cardinal Hayes (NY): Ian Jackson was exceptional at Pangos All-American camp. Ian elite handles opens up the game so much for him especially with his pace. Ian is such a crafty guard that gets to his spot off the dribble and has been knocking down his jumpers at a high clip. Ian has a very good skillset and a high IQ. Ian is an athletic guard that can finish in a variety of ways at the rim.

3) Jeremy Fears – 2023 – 6’1” – PG – La Lumiere(IN): Jeremy Fears is an exciting guard that gets everyone involved offensively. Jeremy has terrific court vison and passing abilility that just makes the game easy for his teammates. Jeremy is an aggressive guard that attacks the rim with authority. Jeremy is a good defensive guard that challenges players at the rim. Jeremy displayed a good mid range game as well. Jeremy showed out at Pangos All-American.

5) Baye Fall – 2023 – 6’11” – C – Accelerated Schools(CO): Baye Fall has a good length and frame and put that on display at Pangos All-American camp. Baye was attacking the rim and finishing strong all camp. Baye showed his jumpshot potential at the camp knocking down a couple jumpers. Baye finishes above the rim and is hard to stop. Baye was very aggressive on the glass grabbing rebounds and blocking shots.

6) Elliot Cadeau – 2024 – 6’0” – PG – Bergen Catholic(NJ): Elliot Cadeau had some strong performances at Pangos All-American camp. Elliot is a very athletic player that finishes at the rim with strength. Elliot is crafty with the rock and that helps him when he gets downhill. Elliot is a playmaker setting up teammates in a lot of different ways.

7) Devin Royal – 2023 – 6’6” – SF – Pickerington Central (OH): Devin Royal played very good at Pangos All-American camp. Devin displayed a balanced game from his ability to shoot the rock and dish it well in half-court set. Devin at 6’6” was getting to the hole while battling through contact. Devin currently a four-star played well throughout the whole camp and really showed that he is a top player.

8) Yves Missi – 2024 – 6’11” – C – West Nottingham(MD): Yves Missi is a very active player and does a lot of the little things. Yves can rebound with the best of them and is a menace on the glass. Yves is a strong big that protects the rim by deflecting and making it tough in the paint. Yves can finish above the rim and has upside to be even more dominant.

9) Isaiah Elohim – 2024 – 6’5” – SG – Sierra Canyon(CA): Isaiah Elohim has a nice mid-range stroke that he can get to anytime he wants. Isaiah has solid handels that allow him to break down defenders and get to the cup at will. Isaiah has a good skill set and can score in multiple of ways. Isaiah has a strong frame that allows him to play through contact and make a play.

10) Aden Holloway – 2023 – 6’0” – PG – La Lumiere(IN): Aden Holloway is a very confident floor general and that was displayed at Pangos All-American camp. Aden is a quick guard who can get to any spot he wants to on the court with his tight handle. Aden smooth stroke opens up so much of his game. Aden ability to knock down jumpers opens the lane for him and he finishes tough shots at the rim.

12) Isaiah Miranda – 2023 – 7’1” – C – Springfield Commonwealth(MA): Isaiah Miranda is a 7-footer that can stretch the floor and open up the offense and even allow his inside game to flourish. Isaiah is very skilled for his size and his athleticism makes him a force on the court. Isaiah can switch on any defender with his versatility on defense which is key for him as he continues to develop and get ready for college.

13) Sean Stewart – 2023 – 6’8” – PF – Windermere Prep(FL): Sean Stewart is a two-way forward that makes an impact on both ends of the floor. Sean is a tough player that has dog in him. Sean is a very bouncy forward that attacks the rim with a purpose. Sean has a high motor and that helps him in all aspects of his game.

14) Cody Williams – 2023 – 6’7” – SF – Perry(AZ): Cody Williams is a scorer and a very talented one at that. Cody has a quick first step and his length allows him to get to the basket quick with his strides. Cody has a good basketball IQ and he displays that in his decision making.

15) KJ Windham – 2024 – 6’3” – SG – Ben Davis(IN): KJ Windham finished off at Pangos with the most made three-point field goals. KJ is a sniper and his stock is only continuing to grow. The lefty shooter was knocking down catch-and-shoot. KJ is a confident shooter and he was knocking down threes at an efficient clip.

16) AJ Johnson – 2023 – 6’5” – PG – Taft(CA): AJ Johnson is a player that really made an impression at Pangos and looks like he will be ranked as a 5-star sooner than later. AJ has insane bounce and he might get it from his brother Jalen Green starting SG for the Houston Rockets. AJ is a problem in transition and cant be stopped when going downhill. AJ has nice handles that allow him to get to his spot and knock down jumpers. AJ has good court vision and sets up his teammates for easy buckets.

17) Amier Ali – 2024 – 6’8” – SF – Montverde Academy(FL): Amier Ali has good size at the wing spot. Amier can shoot the ball at a high clip and displayed that at Pangos All-American camp. Amier has a long frame that gives him elite size on the perimeter. Amier can attack the rim pretty well. Amier is solid moving without the ball and creating opportunities.

18) D.J. Thomas – 2024 – 6’0” – PG – Liberty(NV): D.J. Thomas look amazing during Pangos All-American camp. D.J. as a high basketball IQ that helps him excel as a playmaker and a floor general. D.J. makes the right play and better yet winning plays. D.J. always gets to his spots to knock down shots.

19) Wesley Yates III – 2023 – 6’4” – SG – Beaumont United(TX): Wesley Yates III is an elite three-point shooter but he has so much more to his game. Wesley has great size and length. His ability to get in the lane and get to his floater is such a great weapon for him. Wesley being such a threat from three allows him to put the ball on the floor and creat his own shot. Wesley moves well without the basketball and helps create easy offense.

20) Isaiah Abraham – 2024 – 6’6” – SF – Paul VI(VA): Isaiah Abraham really put people on notice at Pangos All-American camp. Isaiah has good positional size. Isaiah can create his own shot and his game is still developing which is scary for opponents. Isaiah can play above the rim and is explosive when attacking.

21) Kaden Cooper – 2023 – 6’5” – SF – The Skill Factory(GA): Kaden Cooper is an intriguing prospect and displayed that at Pangos All-American camp. Kaden has a strong frame at 6’5” plus his athleticism opens up his game. Kaden can score in many different ways and a high scorer at that. Kaden is a two-way player and he brings the energy on the defensive end.

22) Brandon Williams – 2023 – 6’8” – PF – Christ The King(NY): Brandon Willimas was impressive a Pangos All-American camp. Brandon is a shifty forward that can take defenders off the dribble and get to his shot or to the rim. Brandon has good footwork and that allows him to create space. Brandon has active hands on defense and gets at defenders.

23) Assane Diop – 2023 – 6’10” – C – Accelerated Schools(CO): Asane Diop has great length at 6’10” which helps him be a versatile defender. His size and motor helps him be a solid rebounder. Assane is a good playmaker as well opening stuff for himself and others.