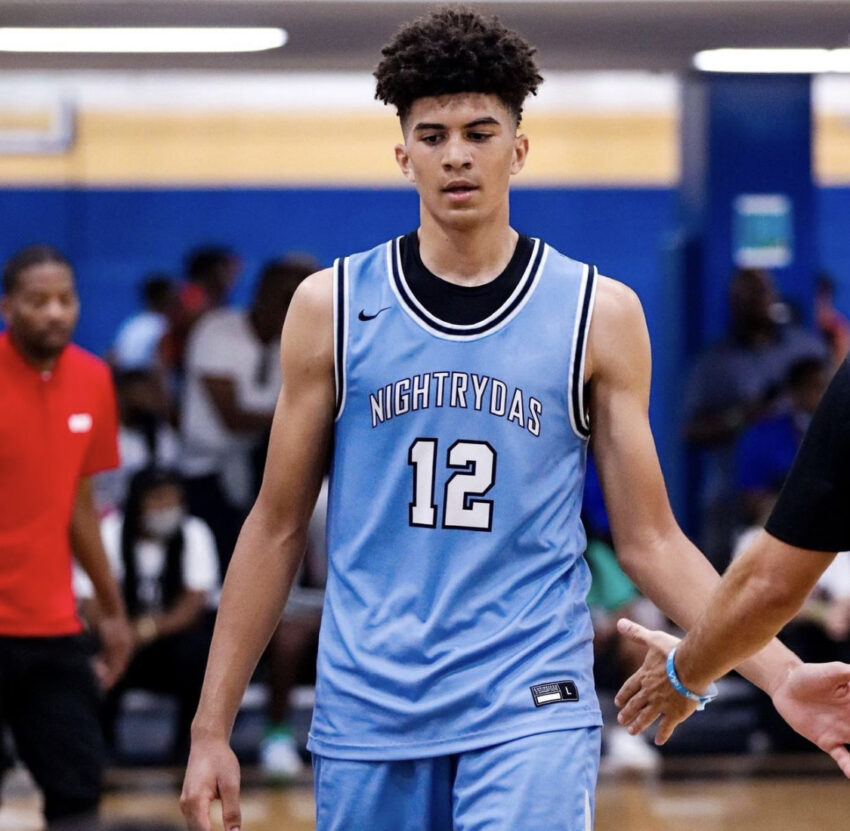 The class of 2025 is a very exciting class with a mix of high flyers and sharpshooters. The class of 2025 has made a splash on the high school game and the circuit. Many players have shown why they are among the best in their class. Excited to see what the future years have in store for these prospects but with that being said Anthony Forrester gives you his top 25 players in the class of 2025.

1) Cameron Boozer (6’8”,215) Forward – Christopher Columbus High School, Florida: Cameron Boozer is a very good player in transition and finishes strong at the rim. When it comes to contact Cameron embraces it and still finishes through his opponent. Cameron is a good presence in the paint as he is a good shot blocker. Cameron plays above the rim and is a lob threat at any moment.

2) Koa Peat (6’8”,215) Forward – Perry High School, Arizona: Koa Peat is a very crafty forward that finishes with authority at the rim. Koa can stretch the floor and shoot the three-ball well. Koa has the handles to dribble in transition and make a play. Koa’s length and instincts help him be a very good shot blocker. Koa is hard to stop when he attacks downhill.

4) Meleek Thomas(6’3”,170) Guard – Lincoln Park High School, Pennsylvania : Meleek Thomas is a guard that has great playmaking ability. Meleek brings toughness to his team that brings energy. Meleek takes the ball to the hole strong and finishes well. Meleek is an athletic guard that makes plays on both ends of the floor.

5) Cooper Flagg (6’7”,200) Forward – Nokomis Regional High School, Maine: Cooper Flagg is a point forward that can create offense off the dribble. Cooper is an athletic forward that finishes strong when driving in the lane. Cooper has a nice touch in the paint. Cooper’s length allows him to disrupt shots and be a force on defense.

6) Elzie Harrington (6’5”,180) Guard – St. Johns Bosco High School, California: Elzie Harrington is a smooth playmaking guard especially with his frame as he is still filling out. Elzie can shoot the three-ball well and he helps spread open the offense. Elzie has the ability to sit on defense and really make it tough on the opposing player.

7) Bryson Tiller (6’7”,195) Forward – Pace Academy, Georgia: Bryson Tiller is a long forward that has a lot of potential. Bryson has the ability to stretch the floor and hit the three-ball at a decent clip. Bryson has active hands and his length helps him, especially on the defensive end.

8) Jamier Jones (6’5”,180) Forward – RIverview High School, Florida: Jamier Jones is an athletic player that plays above the rim. Jamier likes to attack the basket and when he does he attacks to score and feels he can score on anyone. Jamier is a crafty player and likes to get creative in transition.

9) Jamarion Palm (6’9”,210) Center – Dothan High School, Alabama: Jamarion Palm is a long athlete with very good defensive instincts. Jamarion is active on the defensive side of things and disrupts opposing teams with his shot-blocking ability. Jamarion is a presence in the paint and is a factor on both sides of the ball.

10) B.J. Davis-Ray (6’5”,180) Forward – Lake Highlands High School, Texas: B.J. Davis-Ray is a very solid player with a nice mid-range game. B.J. plays under control and with a good pace. B.J. scores well off the dribble and has a good feel on offense. B.J. brings it on both sides of the basketball as he is very active on the defensive end.

11) Badara Diakite (6’8”,205) Center – Northwest Catholic High School, Connecticut: Badara Diakite is a good shot blocker. He also rebounds the basketball really well. Badara makes good decisions when passing out of the post. Badara is good when finishing in transition. Badara is a player that finishes above the rim.

12) Parker Jefferson (6’8”,210) Center – Waxahachie High School, Texas: Parker Jefferson is an all-around scorer. Parker has a really nice mid-range game. His ability to shoot the three-ball well helps stretch the floor for his team. Parker is very active on the glass and plays solid on both ends.

13) Isiah Harwell (6’4”,108) Guard – Century High School, Idaho: Isiah Harwell is a problem when attacking downhill. Isiah finishes well around the rim. Isiah is a good three-point shooter which makes him a tough cover because he can do so much. Isiah is good in transition and always makes the right play.

14) Jeremiah Green (6’1”,170) Guard – John H. Guyer High School, Texas: Jeremiah Green is a solid guard with good playmaking ability. Jeremiah is a guard that attacks the rim and welcomes the contact. Jeremiah has a nice stop and pop game that helps his offensive game. Jeremiah’s shotmaking ability makes him a tough cover.

15) Jalan Haralson (6’5”,190) Forward – Fishers High School, Indiana: Jalan Haralson finishes at the rim with purpose and strength. Jalan’s athleticism helps him with his put-back ability. Jalan is a willing passer and that makes him such a good player. Jalan has a great motor that shows his willingness to grind.

16) Jovanni Ruff (6’5”,175) Forward – Long Beach Polytechnic High School, California: Jovanni Ruff is a good three-point shooter. Jovanni has a nice mid-range game as well as a floater game. Jovanni has good handles that allow him to get to the paint with ease. He can get it done on the offensive end.

17) Aaron Rowe (6’0”,160) Guard – Father Tolton Catholic High School, Missouri: Aaron Rowe is a solid guard with great handles. Aaron is great off the dribble attacking and pulling up. Aaron is always looking for an open man and has good playmaking ability.

19) Trey Mckenney (6’4”,220) Guard – Saint Mary’s Preparatory School, Michigan: Trey Mckenney is a very nice guard that makes the right plays. Trey shoots the ball with confidence. Trey is a three-level scorer and is a problem on offense. Trey has active hands-on defense so he impacts the game on that side as well.

20) Bryce Heard (6’5,180) Forward – Kennwood Academy High School, Illinois: Bryce Heard attacks the paint strong and has the size of the finish. Bryce shoots the basketball well so the defense can’t sag off which helps his drive game even more. Bryce is aggressive down low and impacts the game down there. Bryce’s length on the court allows him to challenge shots and disrupt players.

21) Maper Maker (6’10,200) Center – Fairmont Prep, California: Maper Maker is a very interesting prospect that can be one of the best players out of this class. He has a good touch around the rim for his size as he is still filling out his body. He is always active near the glass which shows his toughness. He steps out occasionally to hit three-pointers so don’t leave him open. Maper is a protector in the paint he will swat anything in his radius.

22) Alexander Lloyd (6’3”,175) Guard – Westminster Academy, Florida: Alexander Lloyd is an athletic guard that has a quickness to his game. Alexander can score on all three levels which makes him a tough guard for any defender. Alexander has a good feel for the game which is crucial to have at the guard spot.

23) Alier Maluk (6’9”,190) Center – Imani Christian Academy, Pennsylvania: Alier Maluk is a solid player that protects the paint well. Alier isn’t just a good defender but a willing and very good passer. Alier can dribble and score in transition. Alier can shoot the basketball from deep. Alier can create offense off the dribble as the center has nice handles.

24) Cayden Boozer (6’3”,185) Guard – Christopher Columbus High School, Florida: Cayden Boozer is a solid player that likes to drive the basketball hard. Cayden is good when finishing in transition. Cayden finishes through contact and never backs away from it. Cayden has good passing ability and sets guys up really well.

25) Danny Carbuccia (5’11”,165) Guard – Archbishop Stepinac High School, New York: Danny Carbuccia is a very good shooter. He is a skilled playmaker that makes the game flow for everyone. Danny isn’t afraid to attract the rim through contact. Danny is a solid player that really does damage in transition. Danny is a player that will sit on defense and make it a tough matchup.