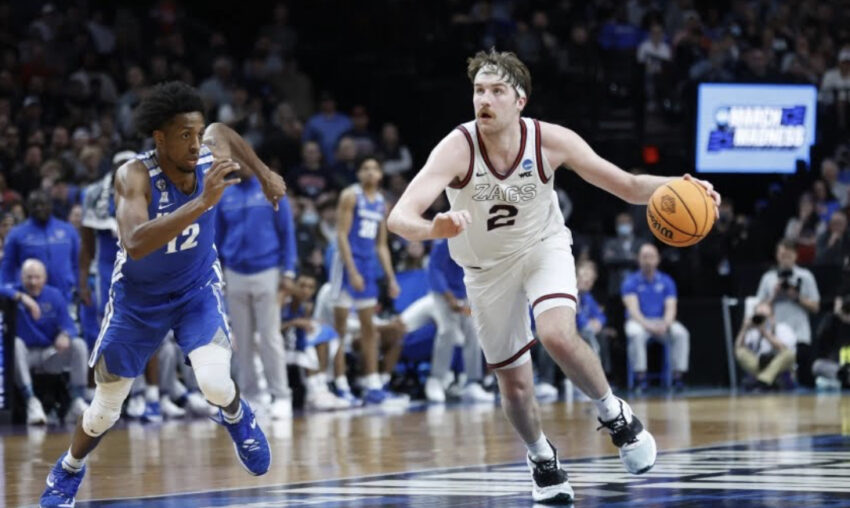 March Madness is the best time of the year for college basketball. It’s where the world can see who is the best college basketball team in the nation. This is the tournament where cinderella teams are born and upsets happen often. With the play-in, first-round, and second-round games coming to an end Anthony Forrester gives you a view of the top ten performers from those games.

1) Drew Timme (Gonzaga) – Drew Timme is the leader of this Gonzaga Bulldogs team and he has not let his team down. In the first round Drew dropped 32 points, 13 rebounds, 2 assists, and a steal versus 16 seed Georgia State. In the early stage of the game, it was close but Drew and the Zags turned up the heat and ran away with it. Drew followed that game up with his second double-double of the tournament when Gonzaga faced Memphis in the second round. Drew started this game slowly but showed up when his team needed him offensively getting in the paint and finishing around the rim with ease. Drew had 25 points, 14 rebounds, 4 assists in a win over 9 seeded Memphis.

2) Brady Manek (North Carolina)– Brady Manek and the North Carolina Tar Heels came in the tournament as one of the hottest teams in the nation. Brady started the tournament off with a win versus 9 seeded Marquette where he put up a double-double with 28 points and 11 rebounds while adding 3 assists and 2 blocks. Brady put together an all-around effort in this one making an impact on the offensive end with his shooting ability as well as defensively with his shot-blocking. In the second round, Brady got ejected for a flagrant 2 foul but not before he left his impact on the game. Brady exploded for 26 points, 5 rebounds, and 2 assists in 27 minutes. Which helped the Tar Heels upset the 1 seeded Baylor.

3) Hunter Dickinson (Michigan) – Hunter Dickinson and the Michigan Wolverines were considered a bubble team before the Tournament started. In the first round, Hunter showed while the Wolverines are no bubble team. Hunter was unstoppable down low putting up 21 points, 6 rebounds, an assist, a steal, and 4 blocks in this game. That effort helped lift the Wolverines in a win over 6 seeded Colorado State which was an upset victory for the 11 seeded Michigan. Hunter and the Wolverines followed that up with a victory over Tennesse a team seeded 3 in the tournament. Hunter did it all in this game from scoring down low to hitting 3’s. This was a complete game for Hunter as he scored 27 points, 11 rebounds, 4 assists, a steal, and a block.

4) Christian Koloko (Arizona) – Christian Koloko is a gamechanger for the Arizona Wildcats. The 7”1’ 230-pound big man does it on both ends for the Wildcats. In the first round, Christian had 17 points, 13 rebounds, 6 assists, and 5 blocks versus 16 seeded Wright State. Christian left his imprint all over that game. In the second round, Christian and the Wildcats faced a tough 9 seeded TCU squad. In the battle versus TCU Christian put up his second double-double of the tournament with 28 points, 12 rebounds while adding 2 assists, a steal, and 3 blocks. Once again the big man made his presence felt and looks to keep it going into the Sweet Sixteen.

5) RJ Davis (North Carolina) – RJ Davis and the 8 seeded Tarheels went up against the 1 seeded Baylor Bears in the second round. RJ Davis was on fire in that game putting up 30 points while adding 5 rebounds, 6 assists, and a steal. The sophomore guard stepped up for the Tarheels as Brady Manek got ejected for a flagrant 2 and Caleb Love fouled out. RJ never folded in this game and helped secure the win for the Tarheels as they get ready for a trip to the sweet sixteen. After taking down Baylor UNC is putting everyone on notice that they are a team that can compete with anybody.

6) Daryl Banks III (Saint Peters) – Daryl Banks III and Saint Peters put the Peacocks on the map in the first round of the tournament. The Peacocks might have had the biggest upset so far taking down the 2 seeded Kentucky Wildcats 85-79. Daryl led the way for the Peacocks as he put up 27 points, 4 rebounds, 2 assists, and 1 steal. Daryl shot from distance at an efficient clip shooting 5-8 from 3. Daryl plays with toughness and determination just like the rest of the Peacocks squad who look to keep the moment going in the Sweet Sixteen.

7) Isaiah Wong (Miami)– Isaiah Wong and the Miami Hurricanes have been a really good team all regular season. So coming into the tournament Miami isn’t your usual 10 seeded team. In the first round, the Hurricanes had a tough matchup versus the 7 seeded USC. Isaiah Wong hung 22 points, 4 rebounds, and 1 assist in the 68-66 win over the USC Trojans. In this matchup, Isaiah was using his explosiveness to get to the rim. In the second round, Isaiah had another big performance but this time versus the 2 seeded Auburn Tigers. Isaiah put up 21 points, 6 rebounds, 2 assists, and a steal versus the Tigers. Isaiah showed his athleticism with a poster dunk on Jabari Smith.

8) Cormac Ryan (Notre Dame)– Cormac Ryan was shooting at an extremely high clip versus the 6 seeded Alabama Crimson Tide in the first round. Cormac put up 29 points on 10-13 from the field while shooting 7-9 from deep and 2-2 from the line. From catch and shoots to running off screens Cormac was instant offense for the Irish. Alabama a good defensive team couldn’t handle Cormac Ryan and it showed.

9) Teddy Allen (New Mexico State) – Teddy Allen and the 12 seeded New Mexico State went head to head with the 5 seeded UConn Huskies. Teddy did not disappoint in this matchup as he came out on fire scoring 37 points, 6 rebounds, 3 assists, and 2 steals in the upset victory over the Huskies. Teddy took over this game from start to finish with his offensive effort in this game.

10) Jacob Gilyard (Richmond) – Jacob Gilyard and the 12 seeded Richmond Spiders were bracket busters early in the tournament taking down the 5 seeded Iowa Hawkeyes 67-63. A lot of “experts” had the Hawkeyes as a potential final four team. Until Jacob Gilyard had something to say about that, he led the Spiders with 24 points, 6 rebounds, and 6 assists. The Hawkeyes couldn’t slow down Jacob offensively as he shot the three-pointer at a high clip sinking 4 for 7.

Honorable Mention: Jaden Ivey (Purdue) – Jaden Ivey is an elite player for the Purdue Boilermakers and he has not let them down in the tournament. In the first round the Boilermakers faced up against the 14 seeded Yale in this matchup Jaden dropped 22 points, 4 rebounds, 1 assist, and 2 steals. Jaden did what he always does plays hard and brings energy to the rest of the well-balanced Purdue lineup. In the second round versus the 6 seeded Texas Longhorns, Jaden led them to an 81-71 victory. In that matchup, he showed his clutchness when his team needed him most knocking down huge shots. Jaden dropped 18 points, 3 rebounds, 3 assists, and 1 block. Jaden is a potential top 5 pick in this upcoming draft and he has been looking like it so far this tournament.