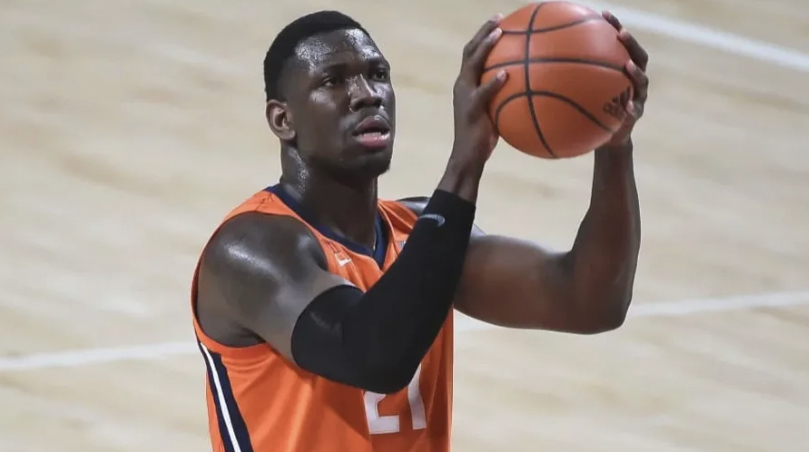 Looking at the Big 10 and the talent level, it should be an interesting year for the conference. With top players leaving, transfers, and returning players throughout the conference, the Big 10 looks to be one of the conferences this year that can make a splash. With that, Anthony Forrester will list the top 10 players in the Big 10.

1) Illinois: Kofi Cockburn -When Kofi decided to return to Illinois he automatically became the favorite to become player of the year in the BIG10 this upcoming season. Last season, Kofi averaged 17.7 points and 9.5 rebounds while leading the Fighting Illini to a top-two seed in the NCAA tournament. Kofi looks to lead the Fighting Illini to more this season as he comes into this season with a career average of 15.5 points and 9.1 rebounds per game. Kofi will be the anchor for this Illinois team.

2) Ohio State: E.J. Liddell – E.J. could have made a path for himself if he stayed in the NBA draft but returning to Ohio State was a plus for E.J. and the University. Blossoming into a star last season with the Buckeyes, when he averaged 16.2 points and a team-best 6.7 rebounds. E.J. will be a factor all year in the BIG 10 and will be the star of this team with Duane Washington no longer here.

3) Purdue: Trevion Williams – Trevion is an absolute stud and will dominate in the Big 10. Trevion is one of the best big man passers in the league. His passing is just one of the highlights to his game. Trevion can score from different areas on the floor as well as being an elite rebounder. Williams averaged 15.5 points, 9.1 rebounds, and 2.3 assists per game last season. Purdue will be a top team in the country next season and Trevion will be a big reason why.

4) Indiana: Trayce Jackson-Davis  -The Big 10 is going to have a lot of competition this season to see who will be the best player in the conference. Trayce has a limitless amount of talent and will be one of the best players in the conference. Last season, for the Hoosiers, Jackson averaged 19.1 points and 9.0 rebounds per game. This season he will look to try and improve those numbers to 20 and 10 which would be key for the Hoosiers. Trayce is a great talent that will be a top player not just in the Big 10 but in all of College Basketball.

5) Michigan: Hunter Dickinson -Since Coach Howard took over the Michigan program they have been a force to be wreckin with. The return of Hunter is huge because he is one of the top scorers, rebounders, and blockers in the conference. Last season as a freshman Hunter averaged 14.1 points, 7.4 rebounds, and 1.4 blocks. Coming into his second season at Michigan Hunter looks to make a leap in his game on a loaded Wolverines squad.

6) Iowa: Keegan Murray -The 6-foot-8, 215-pound forward has a chance to really break out this season. Last season, he averaged 7.2 points and 5.1 rebounds per game as a freshman. Some might look at his stat line and think he won’t be a top player in the conference but he showed flashes last year. At times taking some of the scoring burden from Garza and Wieskamp last season. Keegan is someone when given the green light can score the ball so look for Keegan to be a breakout star in the conference.

7) Maryland: Eric Ayala -Eric Ayala is one of the top point guards in the conference and will look to stand out on a new look Maryland squad. Ayala broke out last year for the Terrapins, averaging 15.1 points, 4.3 rebounds, and 2.2 assists per game. Eric will be a top returner for the Terrapins and will have some transfers joining him for an exciting season.

8) Michigan State: Tyson Walker -Northeastern transfer Tyson Walker will be a great addition to the Spartans this season. Walker is a big time scorer, averaging almost 19 points per game for the Huskies last season. Walker will look to fill the hole left by the transfer of Rocket Watts and jump into the role of one of the top guards in the conference. He is also a solid distributor of the ball, averaging almost five assists per game.

9) Penn State:  Seth Lundy -Lundy was one of the 35 Big Ten players that entered the transfer portal, but ultimately he is returning to the Nittany Lions as one of the best returning pure scorers in the conference. Seth averaged over 10 points per game last season as a sophomore, and even though Penn State might have a tough year as a team he will have plenty of opportunities. With the loss of Izaiah Brockington (Iowa State) and Jamari Wheeler (Ohio State), the opportunities will be ripe for Lundy to have a huge breakout season. With his tremendous scoring ability Seth is likely to break out at any moment.

10) Michigan: Caleb Houstan -Caleb is a perfect stretch four with his size and skill level. His feathery catch and shoot jump shot that he knocks down at an efficient rate. Houstan is a very good catch and shoot artist that can also put the ball on the floor some when attacking late closeouts. Houstan is a long and lean shooter who is an excellent low maintanenced prospect. Houstan is talented and will be an elite option for Juwan Howard and Michigan.