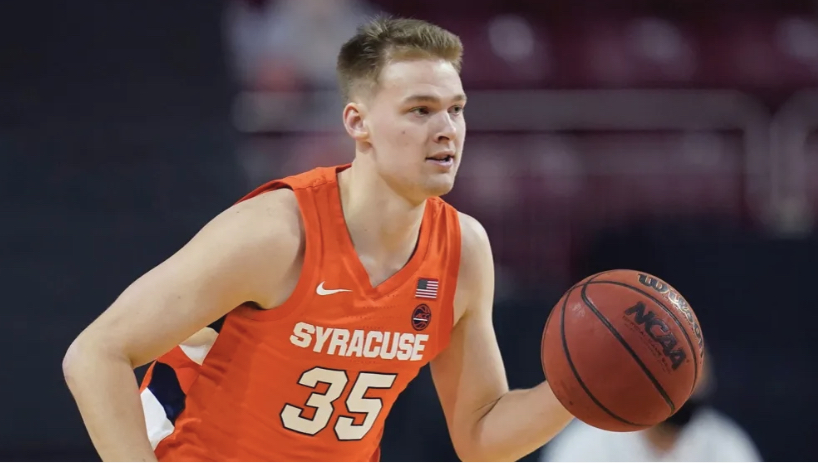 Looking at the ACC last year the conference isn’t what we are used to seeing. This season the ACC looks to bounce back to what we all know the ACC is capable of. So with that being said Anthony Forrester takes a deep dive in at the ACC to see the top 10 players this year going into the season.

1. Buddy Boeheim, Syracuse -Buddy had a Cinderella type story last season making it to the sweet sixteen in the NCAA tournament. Buddy was shooting 57% from the 3 in the tournament. Buddy is coming into this season to prove that last NCAA tournament run wasn’t a fluke. This will be Buddy senior year and he looks to finish it off with a bang. Syracuse is flooded with weapons so it should help Buddy out with spacing as he is trying to be a more efficient shooter this season.

2. Armando Bacot, UNC -Armando Bacot finished up last year with third team all ACC honors last year. Armando averaged 12 points, 7 rebounds, and shot 63% from the field. Armando tested NBA waters but didn’t receive any real feedback that would cause the Tarheel to stay in the draft. Armando has a lot to prove this season in the past two years he didn’t win anything and that’s rare for Carolina recruits because their track record says different. With new head coach Hubert Davis taking over the team, let’s see how that will impact Armando and the rest of the Tarheels.

3. Paul Banchero, Duke -Paul is the next great freshman to come through the ACC. Paul has a great frame that he will still grow into. Paul is most affected in his goto at the high post knocking down the jumper or getting by defenders and getting to his spot. Very active rebounder with a high basketball IQ that helps him be a factor at the rim. His size gives him versatility to play at the 4 or the 5.

4. AJ Griffin, Duke -Adrian Griffin Jr. at 6’4” 160 stands at ideal size for the shooting guard position. With a frame like that mixed in with his athleticism makes up for a scary combination. AJ is very versatile on the defensive end being able to defend multiple positions. AJ court vision is unreal and should help him at Duke while he adjusts to the ACC style of play. AJ has tremendous upside and will be up to him to reach that.

5. Caleb Love, UNC -Caleb Love is another great guard that has come through the Carolina program. When he played at a high level last year the Tarheels backcourt looked great to pair with its big and aggressive front court. Caleb didn’t have the same opportunity as other great Carolina point guards to learn from other greats. Last season Love averaged 10.5 points, 3.6 assists, 2.6 rebounds, while shooting 31.6 percent. Caleb looks to lead the Tarheels back to the promise land.

6. Keve Aluma, Virginia Tech -Last season Keve Aluma finished the season off with All ACC second team honors which is a huge accomplishment. Keve averaged 15.2 points and 7.9 rebounds per game last season while leading the Hookies to an 15-7 overall record. The Wofford transfer has been making noise in the ACC and looks to make a splash to end his college years.

7. Isaiah Wong, Miami -Isaiah the 6’3” 180 pound guard that led the Hurricanes in scoring averaging 17.4 points per game. Last season the Hurricanes had an embarrassing season finishing up at 4-15 which this year’s Canes will look to improve immediately. Isaiah testing NBA waters is a win for himself and the program. Isaiah gets to see where he is at in terms of ready for the league and Miami sees what type of player they have in their program.

8. Prentiss Hubb, Notre Dame -Prentiss was really impressive for the Irish last season bringing home third team all ACC honors. He was named team captain as well so that just shows the type of character he has. Prentiss averaged 14.6 points per game, 5.8 assist per game, and 3.2 rebounds per game. Prentiss looks to build on last season as he tries to take that next step at Notre Dame.

9. Michael Devoe, Georgia Tech -Last season Michael brought home All ACC honorable mention this season he looks to bring home more. The smooth left handed guard has brought home that honor the last two seasons. Talk about consistency for sure. Michael has had one of the most impressive college careers from the standpoint of how his career has improved from freshman to junior. This season will be huge for Michael and expect him to stand out for Georgia Tech.

10. Kihei Clark, Virginia -Kihei is usually the smallest man on the court or limited on the court because of his offensive game. Kihei is the heart beat for the Cavaliers and keeps them going. He holds great value in their program and is key for their success. Kihei has champion experience and will use that to continue to guide him and help him be the leader that Virginia needs to get back to the promise land. Confidence is something that Kihei doesn’t lack and is what he is going to continue to need to finish off at Virginia with a bang.